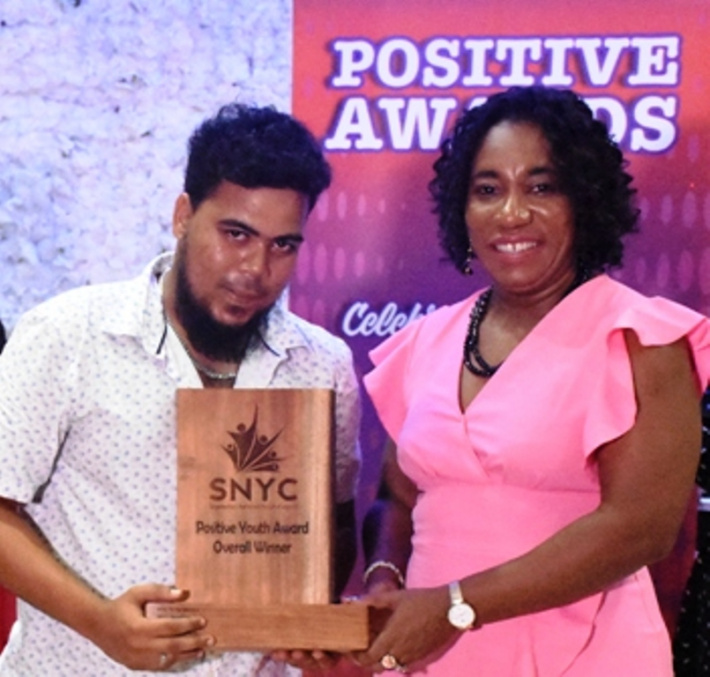 Aaron Pool is the overall winner of the Positive Youth Image Award 2019.

This was announced in a ceremony held at the Chilli Bar, La Louise, on Friday evening.

The event was attended by the Minister for Youth, Sports and Family, Marie-Celine Zialor; principal secretary for youth and sports Fabian Palmyre; chief executive of the Seychelles National Youth Council (SNYC) Penny Belmont; youth workers and the awardees themselves.

A total of 51 youths were awarded in four different categories – secondary schools, post-secondary institutions, youths at district level and youths from affiliated groups. They were all recognised for their positive contributions and differences they make in their respective schools and communities.

Aaron noted that he has been active in youth activities in his district, Bel Ombre.

“We must not focus on the negative side when it comes to youth as every single young person has some positive aspects,” he said.

With the opportunity that he has received, Aaron noted he will bring more changes when it comes to youth in his community and bring more people on board with him in changing the lives of young people for the better.

The Positive Youth Image award has been an ongoing event on the SNYC’s Youth Festival event since 1999, with the aim of celebrating young people who do outstanding work in their communities.

In addressing the awardees during the ceremony, CEO Belmont said that youths should stay engaged and focused in whatever they do.

“We always speak on the challenges we have with young people, but we must also lift up those who bring a positive aspect to their community and the award serves this purpose,” she said.

She added that in 2021 SNYC will encourage the youths to take more responsibilities in different NGOs.

Minister Zialor also took the stage where she congratulated all 51 youths for their accomplishments throughout the year.

“Opportunity is not given, it is up to every single one to grab it. There is nothing that is impossible,” said the minister.

Aside from best overall, Aaron was also recognised as best youth at district level.

The other four finalists who were vying for best overall youth award were Alyssa Dogley, Phillipa Servina, Maria Finesse and Lara Bouchereau.

SNYC also awarded some of its longest serving youth workers during Friday’s ceremony. France Ernesta and Lita Jean were both recognised for their 34 years working with the council. Maria Etienne was awarded for her 28 years, while Simon Barra was awarded for 22 years followed by Debra Fanchette with 20 years.

France Ernesta, noted that his 34 years working with young people has been an accomplishment for him.

“My wish is that all young people be given equal opportunity,” he said. 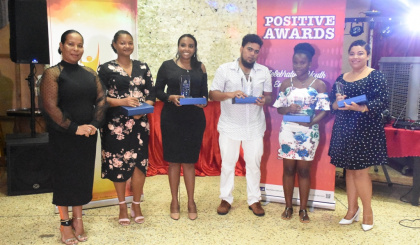 Aaron and the other four finalists in a souvenir photograph with CEO Belmont (Photo: Jude Morel)