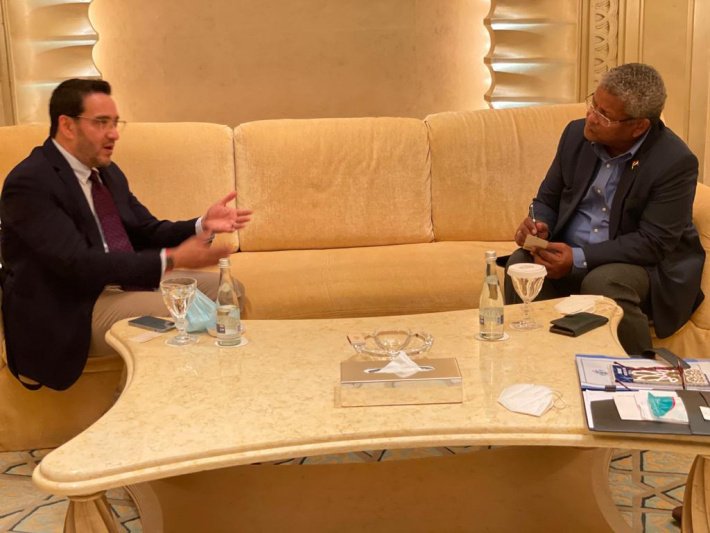 President Ramkalawan in discussion with the president of Amsa Renal Care, Abdullah Ajmal

By Elsie Pointe / Office of the President

The recent promise of 50,000 doses of Covid-19 vaccine from the United Arab Emirates government might be doled out as soon as January 2021, President Wavel Ramkalawan has stated.

In an exclusive interview with TeleSesel, President Ramkalawan, who is on a five-day visit to the United Arab Emirates (UAE), noted that Seychellois will receive the vaccine jabs once the Ministry of Health “gives the green light,” on the vaccine.

“This will help us re-open our economy and will be good for our country. Seychelles will most probably be among one of the few island states to be vaccinating its citizens. This is really good news and we are now only awaiting for the green light from the Ministry of Health and if everything goes according to plan, Seychellois will be getting the vaccine early in January,” said the president.

The vaccine was developed as part of cooperation between the UAE and China, President Ramkalawan added, noting that the Crown Prince and members of the royal family have already been vaccinated.

Other persons residing in the UAE have also been given the vaccine including some of the Seychellois currently living in the Emirates.

Amsa Renal Care is based in the UAE with a branch in Seychelles through which the Ministry of Health outsources dialysis treatments, hence the meeting was an opportunity to discuss the existing contract.

According to a State House press release, President Ramkalawan successfully negotiated a reduction in the cost of treatment through the discussions from US $250 to US $175 per session per patient. This will result in savings of around R46 million for the year 2021 for the country.

“We talked about the re-negotiations of the contract between Seychelles and Amsa, and secondly ‒ which is good news for our country ‒ the current price of dialysis per session is US $250 and a patient needs three sessions each week, but we have been able to negotiate for the reduction in cost of the treatment down to US $175.

“This means an economy of R46 million in our country and this is what I want to put emphasis on. It was an important negotiation during my visit here in Abu Dhabi. The president of Amsa will be travelling to Seychelles in January to look at the other aspects. The R46 million added to the R100 million we have already been able to save in the Ministry of Health means that we are on the right path.”

As part of his working visit in the United Arab Emirates, President Ramkalawan accompanied by Minister Radegonde further visited the Seychelles embassy.

Following a tour of the offices led by Ambassador Jean-Claude Adrienne, the delegation availed of the opportunity to discuss the operation of the mission.

The president also announced there are no plans to close the embassy in the UAE given its strategic role in the relationship between Seychelles and the UAE and the wider region.

The president further met with Seychellois nationals working and residing in the UAE.

During the meeting, discussions centred on the general atmosphere in Seychelles at the moment, the new approach of government and the aspirations of the Seychellois professionals to potentially return back to Seychelles and make a positive contribution to their country.

Discussions were also held in regards to the Seychellois diaspora playing a greater role in the development of the country.

President Ramkalawan announced that the Ministry of Foreign Affairs and Tourism will soon conduct a census of all Seychellois living abroad with comprehensive data on qualifications, abilities and their interest to invest in the country.

This is in line with new principle that all Seychellois should feel part of the country and have the possibility of making a contribution towards the development of their home country, Seychelles.

Photo sources: Office of the President 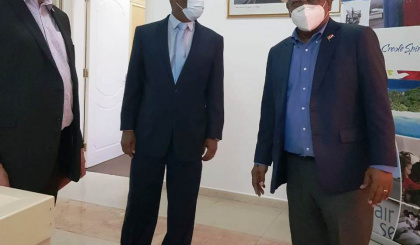 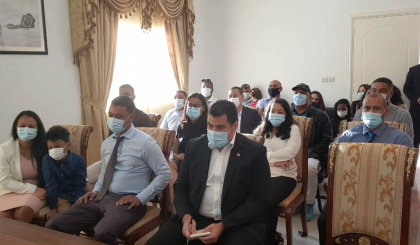 The Seychellois nationals during the meeting with President Ramkalawan