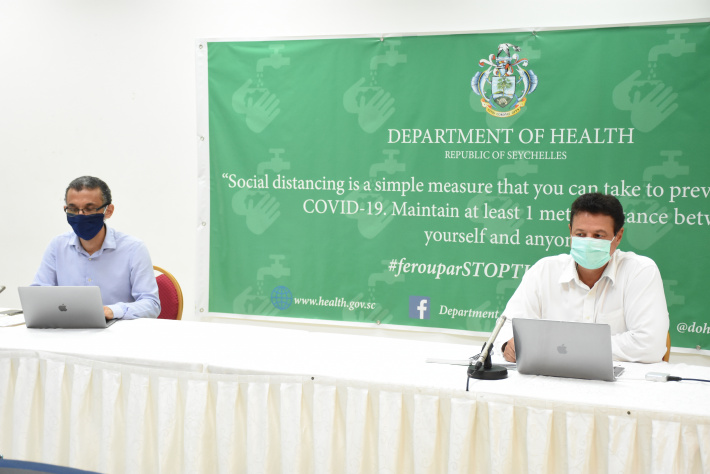 Eleven more people have tested positive for the Covid-19 virus.

This comes a day after the government announced an extension of the public restrictions that had been put in place since the beginning of the year.

In a press briefing yesterday, Public Health Commissioner Dr Jude Gedeon, who was accompanied by the chief executive of the Health Care Agency Dr Danny Louange, explained that the reason it has been decided to extend the restriction is because contact tracing on the existing positive cases is not yet completed.

He added that cases are appearing in critical manufacturing and service areas and the Ministry of Health needs to give them more attention for early containment.

He said that the two weeks will allow health workers to complete the first dose of vaccination for frontline workers.

The health commissioner also talked about schools remaining closed and added that returning to school while there is still community transmission will compromise the lives of students and teachers.

He added that even if children do not suffer harsh symptoms of the virus they can still spread it in the community and fuel the resurgence of new cases.

The doctor also mentioned that out of the 612 infections recorded to date, 285 people are still active while 327 have recovered. 5310 are currently under observation.

Sixty-three health workers in total have been infected and that includes nurses, doctors, pharmacists and supporting staff.

Dr Gedeon has noted that some of them contracted the virus in the community and as of now 61 out of the 63 are still positive.

The doctor also confirmed that over 3000 tests are being conducted each week and over 600 each day, adding that the age group that has been most affected by the community is between 15 and 64.

He noted that the positivity rate in the country, which is currently at 8 percent, will go down if we continue to follow health protocols and take the vaccine.

“The vaccine is important as it will help build herd immunity. If only a small number of the population get vaccinated then we will still be at risk of community outbreak. In order for the vaccine to work best we must all take it,” said Dr Gedeon.

Regarding the quarantine and isolation facilities, Doctor Louange confirmed that currently there are 16 patients at the Family Hospital at Perseverance. He also noted that two patients are currently recovering in the Intensive Care Unit.

“We also have 11 patients at the Coast Guard facility at Perseverance as well as 74 people at Avani, some of whom will be discharged soon,” he said.

The doctors also noted that new stocks of vaccines are expected to be in the country in the coming weeks for the general population.

Before ending the press conference Dr Gedeon had much praise for the Seychellois people who, in general, are respecting the health guidelines and wearing their masks.

Seychelles gets anti-tuberculosis medications from India |14.09.2022