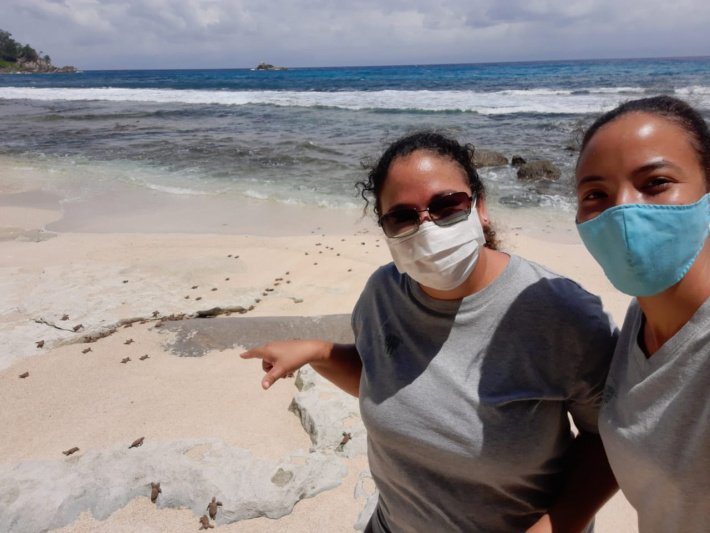 It’s that time of year when baby sea turtles can be seen emerging from their nests and scurrying down the beach to the sea in the hopes of survival. The sad truth is that only an estimated 1 in 1,000 to 1 in 10,000 of these hatchlings will escape natural predators such as crabs, birds and fish and survive to reach sexual maturity. With the odds already stacked against them, we thought it was a good time to shed some light on how best to ensure that as many of them as possible make it safely to the sea.

Hawksbill turtle nesting season in Seychelles is between the months of October to March. At this point in the nesting season, we find that the activity of nesting females starts to slow down and the activity of emerging hatchlings picks up! After an incubation period of around two months, successfully developed sea turtle hatchlings will emerge from their nests and attempt to make it out to sea. ‘Imprinting’ on their natal beach – digging themselves out of the nest and making their way to sea – is considered to be integral to the life cycle of turtles. It allows them to exercise their lungs to be able to swim and dive when in the water and potentially return to the same area for foraging, mating or nesting a decade or more later. Hatchlings should thus be left to do so and be observed from a minimum distance of two metres. To break open their shells, hatchlings use a temporary egg tooth, or carbuncle, though it can take a few days for them to actually emerge from the nest. They generally emerge at cooler times of day, such as morning or evening, when they are less likely to be predated upon or overheat. When emerging in darkness, it is thought that turtle hatchlings are guided by the light reflected on the sea, which is why they are disoriented by artificial lights. As such, all lights visible from the beach should be switched off when hatchlings are or may be emerging. If hatchlings become disoriented, it is advisable to guide them on a path to the sea without touching or handling them as far as possible and remove obstacles such as holes, debris or other items on the sand. If possible, remain at a safe distance to ensure that they are not trampled on and safely reach the sea. Nesting beaches adjacent to roads are inevitably problematic for emerging hatchlings, as car lights can cause serious disorientation, leading hatchlings away from the sea and toward the road instead. If hatchlings are seen on the road, they may need to be guided down the beach towards the sea, while following all road safety procedures.

Sea turtles have been around since the time of the dinosaurs, however, six of the world’s seven species of sea turtle are currently threatened, with the two species known to nest in Seychelles – Green (Chelonia mydas) and Hawksbill (Eretmochelys imbricata) listed as ‘Endangered’ and ‘Critically Endangered’ respectively on IUCN’s Red List of Threatened Species. In addition to the localized threats that sea turtles face such as poaching, by-catch, habitat destruction and pollution, they are also affected by global climate change, which alters the suitability of their nesting grounds, as well as sand temperatures, which affects the sex of hatchlings. Let’s do what we can to conserve our sea turtle populations for the health of our oceans and planet. Please refer to MCSS’ hatchling watchers code of conduct for further information. To report any sightings or concerns with nesting or hatching turtles, please contact Green Line on 2722111 or MCSS on 2711399 (for incidents on Mahé).

Marine Conservation Society Seychelles’ (MCSS) Temporal Protected Areas Project is funded under the GOS-GEF-UNDP project entitled ‘A Ridge to Reef Approach for the Integrated Management of Marine, Coastal and Terrestrial Ecosystems in the Seychelles’ (Ridge to Reef Project). The projects’ objective is to manage and conserve the flow of marine, coastal and terrestrial ecosystem services in targeted islands of the Seychelles for multiple benefits through the Ridge-to-Reef approach. 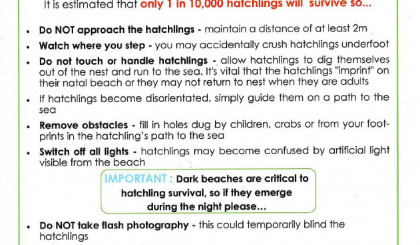 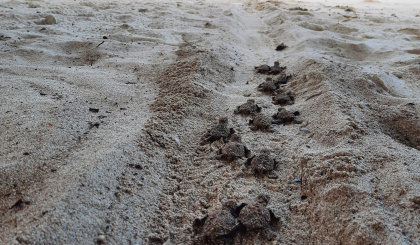 Hawksbill turtle hatchlings making their way to the sea