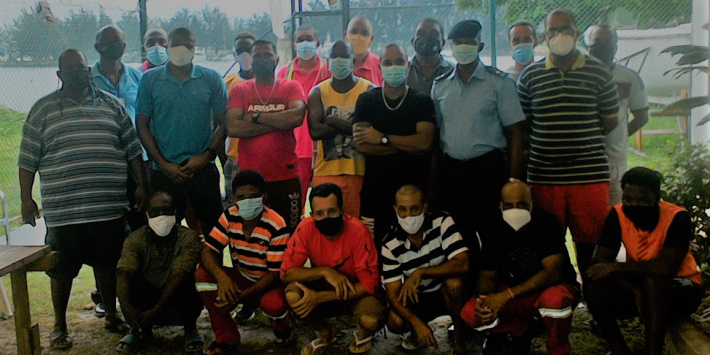 Inmates participating in the Seychelles Prison Service’s rehabilitation programme, ‘Project Phoenix’, have volunteered to contribute the sum of R17,000.00 (seventeen thousand rupees) to the Seychelles Covid-19 relief fund, joining other private persons and companies in the national effort.

The rehabilitation effort under the programme ‘Project Phoenix’ engages with inmates using a stepped approach, a gradual process of addressing behaviour and improving as they attain the goals of each step.

Positive behaviour is encouraged affording opportunity for the inmates to engage fully in the programme. The ultimate goal for those on the programme is to complete their sentence positively, reengage with their families, and become a responsible member of society.

“We note that a certain number of persons who find themselves being convicted arrive into the prison system with several negatives against them already. Many are battling addiction issues, while others coming from broken homes are dealing with other behaviour issues, attention disorders, poor self-esteem, leading to poor choices in life,” said Elsa Nourice, principal probation officer and head of rehabilitation and psychosocial support at the prison service.

As directed by the Superintendent of Prisons two years ago, ‘Project Phoenix’ was given a fresh approach of work with the ultimate aim of reducing recidivism, noting a study in 2015 which found that 35% of all inmates released commit the same offence and are convicted again.

“A positive structure and social reinforcement as the approach under ‘Project Phoenix’ delivers, provides an inmate who is seriously participating an opportunity to re-adjust and stabilise themselves,” added Ms Nourice.

Inmates who volunteered to donate to the fund are all attached to the Resettlement Day Release (RDR) work camp and are engaged in work schemes with several private companies under prison supervision, this under programme 2 of ‘Project Phoenix’.

This positive approach enables the inmates to repay fines and support their families while incarcerated as well as a saving of funds which are accessed upon release. They as well learn positive skills, which can be used as they seek employment.