Presidential Wavel Ramkalawan and a delegation of diplomats and some government ministers are expected back on Mahé today after a three-day trip to some outer islands over the weekend.

The tour took in the Unesco World Heritage site Aldabra Atoll followed by brief stops to other outer islands including Alphonse, Assumption, Astove, Farquhar and Desroches.

President Ramkalawan was expected to inaugurate the PV plants on Astove and Farquhar during the trip.

On Desroches the aim is to promote the island as a high-end destination for VVIPs.

Besides members of the diplomatic corps based in Seychelles, the presidential delegation also included the First Lady, Linda Ramkalawan; the Minister for Foreign Affairs and Tourism, Sylvestre Radegonde; and the Minister for Agriculture, Climate Change and Environment, Flavien Joubert.

Vice-President Ahmad Afif and the Minister for Finance, Economic Planning & Trade Naadir Hassan, were expected to join the group on Saturday.

The accompanying photos show the delegation on their arrival on Aldabra on Friday. 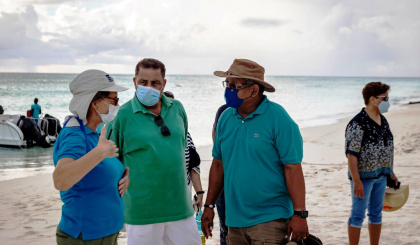 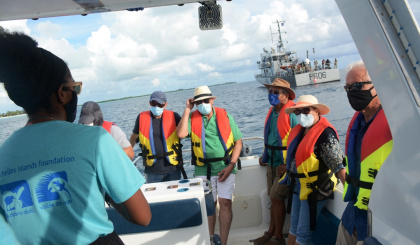