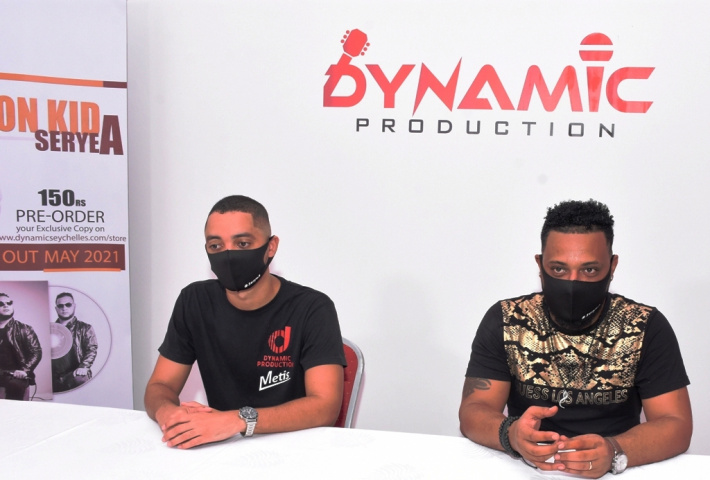 Ion Kid and his record label, Dynamic Production, are gearing up for the release of the artist’s fourth studio album, ‘Serye A’, scheduled for June 2021.

‘Serye A’ will be Ion Kid’s first solo studio album to be launched under a local record label.

“Dynamic Productions is one of the first labels to be established in Seychelles and its aim is to go all the way—it’s not just targeting the local market but also the international scene,” explained Ion Kid in a press conference on Friday, April 9.

Seated alongside Dynamic Production’s manager Sam Payet, Ion Kid went on to explain that operating under a record label brings more opportunities for artists since the record label works on generating more revenues and a larger audience base, while the artists remain focused on making music.

“I am a self producing artist which means that I do everything by myself – from writing the lyrics to recording to making my own sounds, but this also makes it difficult for me to focus on the business element of the music industry. While artists are busy creating, the business side is suffering and Dynamic Productions is here to fill in that gap, which I appreciate,” he added.

‘Serye A’ will comprise 20 songs, 11 of which are collaborations with both local and international artists in the likes of Jamaican Anthony B and Benjam from La Reunion, best known in Seychelles with the song ‘Nathalie Chocolat’.

Local artists to look out for in ‘Serye A’ include Tania, Gunz, Mercenary, Jakim, Richie B and Auspicious.

Ion Kid’s son, Shakeal, also appears on the new album – an exciting feature for kids who enjoyed his 2017 hits ‘Bonzour Zanfan’ and ‘Mesan’ with Gunz.

Ion Kid went on to explain that the album will be made up of different styles and genres of music-- reggae, afrobeat, dancehall, reggaeton, soul and sega.

“Over the years, I have evolved and adapted to different styles so I cannot say that I have a specific style. It’s going to be Ion Kid in different ways,” he said.

The same can be said for the themes of ‘Serye A’, whereby listeners will be able to enjoy a range of moods from the emotional and sad to the most hyped and fun songs.

His discography also includes ‘An Mouvman’ which was released in 2011 and ‘Ou’ in 2009, as well a myriad of singles such as the most recent and popular ‘Baba Dou’, performed together with Auspicious. The latter is expected to also feature on ‘Serye A’.

Ion Kid’s newest masterpiece is already available for pre-order on www.dynamicseychelles.com for R150, and once released, in two months’ time, ‘Serye A’ will be available on all digital platforms and on CD.