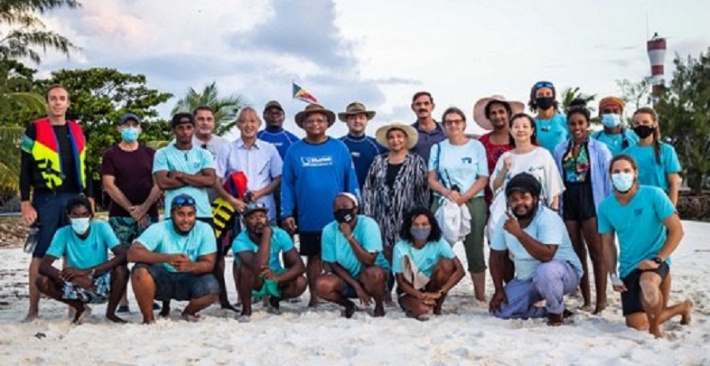 President Wavel Ramkalawan, who is also the Patron of the Seychelles Islands Foundation (SIF), has commended the SIF management and team for the exceptional work they are doing to maintain the pristine ecosystem of Aldabra. He further pledged and reiterated the government’s commitment to further supporting the vision of the foundation.

President Ramkalawan was speaking on Sunday prior to leaving the Unesco World Heritage site which he had visited over the weekend.

He was accompanied by members of the Seychelles diplomatic community, the First Lady, Linda Ramkalawan, the Minister for Foreign Affairs and Tourism, Sylvestre Radegonde and the Minister for Agriculture, Climate Change and Environment, Flavien Jourbert.

The delegation, who arrived on Aldabra on Friday, was welcomed on the atoll by the chief executive of the SIF, Dr Frauke Dogley. Upon arrival, the delegation took part in a lagoon boat cruise where they had the opportunity to experience the unique scenery of Aldabra.

On the main day of the expedition, Saturday, the Presidential delegation guided by the SIF team toured the Aldabra research station, viewed remains of the old settlement and explored other key sites.

Through the tour, the delegation had the opportunity to view first hand elements of the flora and fauna – primarily plants, the giant tortoises in their natural environment as well as the various species of land birds, which only occur on the atoll.

During a special presentation, the SIF team on Aldabra also had the opportunity to showcase what the foundation has been engaged in for the past 40 years, highlighting critical environmental projects that SIF will require global partnerships in order to continue implementing.

In line with the upcoming 50th anniversary of the Aldabra research station on June 30 this year, the President and diplomats were not only briefed on the various ongoing research and conservation programmes on the island but also the way forward for Aldabra.

Other areas of discussion also included specialised technical support, capacity building requirements and the implementation of strict biosecurity procedures to minimise the threats of invasive species.

Other threats such as climate change, marine debris, pollution as well as the lack of financial resources were also raised.

Aldabra is an outstanding example of a coral atoll and offers a biological and ecological reference point for many species and habitats as it is significantly less disturbed than other atolls in the Indian Ocean and elsewhere in the world.

“I would like to express my sincere appreciation to the SIF team for the invaluable work you are all doing under the guidance of Dr Dogley. As government we are here to support your efforts and remain committed to ensuring Aldabra and all other parts of our territory that are under conservation are protected,” said President Ramkalawan before leaving the atoll.

On her part Dr Dogley noted that the expedition was a great opportunity too as it is not every day that they get the chance to explain to the head of state, ministers and international delegates what they do on Aldabra as well as the various projects SIF is conducting along with its challenges.

She added that the research station turning 50 this year is a big accomplishment especially for a country as small as Seychelles.

“We are proud that we were able to give this report to the president,” said Dr Dogley.

She noted that climate change is real and Aldabra is proof of that and she hopes that the ambassadors use the island as an example and advocate for climate change on an international platform.

She also talked about the Aldabra House, a project that SIF is undertaking, where she noted that the president has given them full support as it will help show Seychellois what Aldabra has to offer.

Some other projects that were discussed between Dr Dogley and the President included the eradication of invasive species on the island that are hindering the fragile ecosystem there. She added that a project like this will likely cost 10 million Euros.

“Operating costs and resources was also discussed with the president as the economic effects of Covid-19 has become a challenge for us,” she added.

Dr Dogley also talked about the various vessels that go by Aldabra and noted that Aldabra has a designated area where shipping vessels are not allowed to get near.

Members of the delegation were highly impressed by the various meaningful environment protection programmes that are not only transforming nature conservation on Aldabra and Seychelles but recognised on a worldwide platform in an effort to save the planet and humanity.