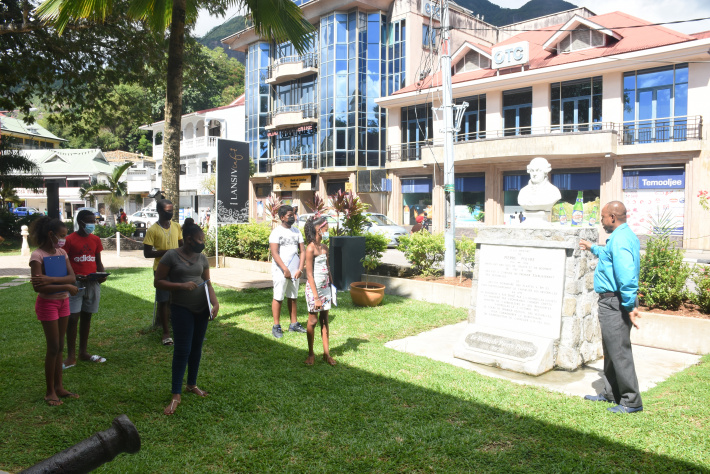 On the occasion of the World Heritage Day to be celebrated tomorrow, April 18, the National Museum of History yesterday organised a guided tour activity.

The tour targeted several young participants of the Museum Educational Programme, a programme which caters for children aged between 7 to 15 years with the aim of teaching them about the cultural heritage and history of Seychelles.

A group of museum staff, including facilitator of the education programme Jeanne Pothin and historian Tony Mathiot, guided the children around the museum, which used to be the former Supreme Court, and monuments in its surroundings such as the clock tower, bust of Pierre Poivre and the Diamond Jubilee Fountain.

Museum curator, Bella Rose, explained that the National Museum of History had to scale down its celebrations of the World Heritage Day this year, due the global pandemic.

The World Heritage Day was initiated by the International Council on Monuments and Sites in 1982 and approved by the United Nations Educational, Scientific and Cultural Organisation (Unesco) in 1983.

“There are some people that are attentive and aware of our national heritages and share this knowledge, but there are also a number of people who do not grasp the importance of these heritages. This is why our sensitisation activities such as this one today and our education programme are so vital,” explained Mrs Rose.

“Each year, the museum and other institutions such as the Seychelles Heritage Foundation try to educate people on this subject and commemorate the day.”

“Ordinarily, the World Heritage Day is celebrated on a much larger scale but the Covid-19 restrictions have not permitted such. Usually you’d see local artists and bands playing outside, small bazaars, sale of traditional food and so on.”

Mrs Rose noted that the museum is working on a programme and activities to attract more visitors to the museum, both local and foreigners, but noted that these will be implemented once the restructuring process within the culture department is finalised.

She added that a café is due to be operational soon on the museum’s premises, and noted that this would hopefully also attract visitors to the museum and provide a small area for them to rest, eat and have a drink after touring the museum.

Thirteen-year-old Gierrah Leon, who has been on the education programme for several years now, said that yesterday’s tour was very informative.

Another participant, Calvin Leon from Plaisance secondary, 12 years old, noted that his interest was peaked by the history of Pierre Piovre during the tour.

The museum’s educational programme will celebrate its 30th anniversary this year on August 25.

Its facilitator, Ms Pothin, explained that it is unsure whether the programme will resume during the school holidays but if so, it will have to take into account the health regulations.

“We will have to divide the groups of children; 7 to 9 years on one day, another group on another day and so on. This is to limit the number of children interacting since our place is not that big.”

Ms Pothin also remarked that the activities would focus on the National Museum of History and town area, rather than having children visit other heritage spots on the island. This is due to sanitary as well as financial reasons.

The accompanying photos show some highlights of the guided tour activity. 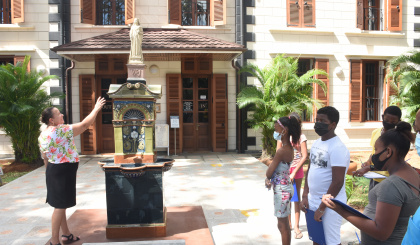