TRNUC hears only one witness in live session |20 April 2021 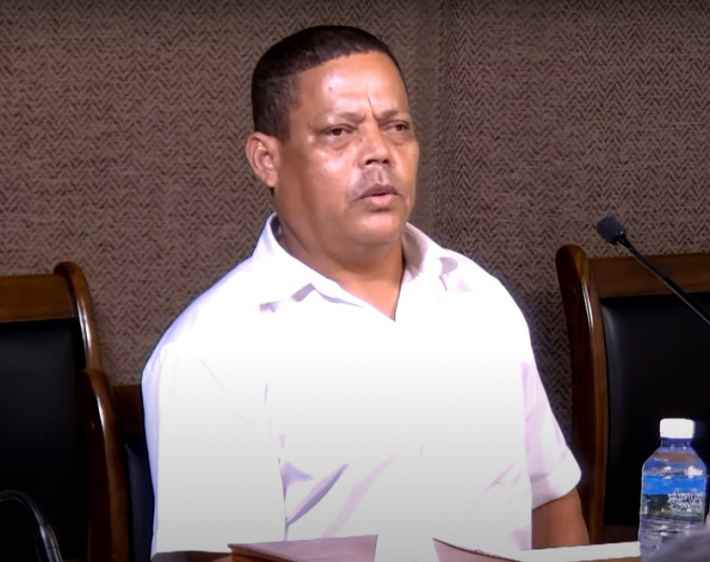 Edward Anacoura was the sole witness to appear in a live session before the Truth, Reconciliation and National Unity Commission yesterday to shed some light in the case of former army officer, Jude Fred. All other hearings yesterday were closed sessions.

The complainant in Case 0287, Jude Fred, had made allegations of abuse of power by the leadership of the Seychelles People's Defence Forces (SPDF) for sentencing Mr Fred up to 360 days imprisonment for being absent without leave (AWOL) in January 2008.

Mr Fred had claimed that he was made to serve his 360 days sentence in a civilian prison, of which he served about 240 days.

Setting down his complaint to the Truth, Reconciliation and National Unity Commission (TRNUC), Mr Fred had identified Mr Anacoura as one of the members of the disciplinary panel that had set out his sentence.

Mr Anacoura was called in to explain the circumstances behind such a harsh sentencing and shed some light as to why Mr Fred was imprisoned in civilian prison instead of a military facility.

In what was certainly not his first appearance before TRNUC, Mr Anacoura noted that he recalls when Mr Fred entered the SPDF and was part of a panel of members who interviewed Mr Fred.

He noted that he also remembers that Mr Fred was serving in the unit based at the defence force headquarters where, at that time, Mr Anacoura was responsible for operations and training.

“He was sentenced for being absent and under the Defence Forces Act this is called as absent without leave, which means that he had not received permission to be absent and he was caught and brought back to the defence forces headquarters,” he added.

According to Mr Anacoura, Mr Fred was AWOL for about three days.

In response to the question by Commissioner Marie-May Léon on whether it was deemed normal for an army officer to be imprisoned in a civilian prison, Mr Anacoura replied that this was a rare occasion.

He explained that many, even those in the defence forces, seem to confuse detention with imprisonment, although both involve someone being locked up for a certain amount of time.

Mr Anacoura however highlighted that an officer is able to be reinserted into the forces if he (or she) is detained by the SPDF, and the Defence Forces Act makes provisions for army personnel to be disciplined and detained within the service, as much as possible.

“There is also the disciplinary trial, similar to the one Mr Fred experienced, and this form of discipline does not allow for an officer to be sentenced in a civilian prison but it has the power to detain an officer at a military facility. An officer may be detained at a civilian facility only if there is a warrant approved by the president. So if they are detained they can come back in the service, if they are imprisoned they cannot,” said Mr Anacoura.

So why was Mr Fred imprisoned at the Montagne Posée prison with a sentence that seemed too harsh for the offence of going AWOL ?

The file provided by the SPDF states that Mr Fred’s most serious offence was going absent from official duty for 2 days, 1 hour and 30 minutes.

Mr Anacoura remarked that this did not seem right and there must have been something else in play to account for Mr Fred’s imprisonment.

“It did not seem that he [Mr Fred] was detained at Montagne Posée but these are information that headquarters should be able to provide the commission[...] because the Defence Forces Act also states that an army officer cannot be detained more than 180 days so if he was brought up there for more than 340 days then he was imprisoned in a civilian prison which is not legal within the forces,” stated Mr Anacoura.

He acknowledged that Mr Fred’s severe sentencing was not proportionate to the offence.

Mr Anacoura went on to add that the final decision in regards to Mr Fred’s case was taken by the chairman of the disciplinary panel, which had been Clifford Roseline at that time.

“I was still a very junior captain at that time. The military is based on ranks and seniority, though it would seem fair that panel members would have a say in it but the chairman had the final say.”

Mr Anacoura also claims that Mr Fred was going through a difficult time then and that he had committed a certain offence prior to this one, adding that Mr Fred had expressed wishes to be released from the army.

“Maybe it was their way of releasing him from the defence forces because it is an arduous process to be released from the forces, maybe they thought sending him to a civilian prison would mean that he would no longer be able to serve,” said Mr Anacoura.

In regards to Mr Fred’s allegations that he was politically targeted from the moment he was caught playing songs of the Seychelles National Party (SNP) – the main opposition party back then – in his car, Mr Anacoura said that this issue was not brought up during his disciplinary trial.

Mr Anacoura nonetheless said that Mr Fred would not have been the first person to go to prison malapropos and it was something that he had always been against.