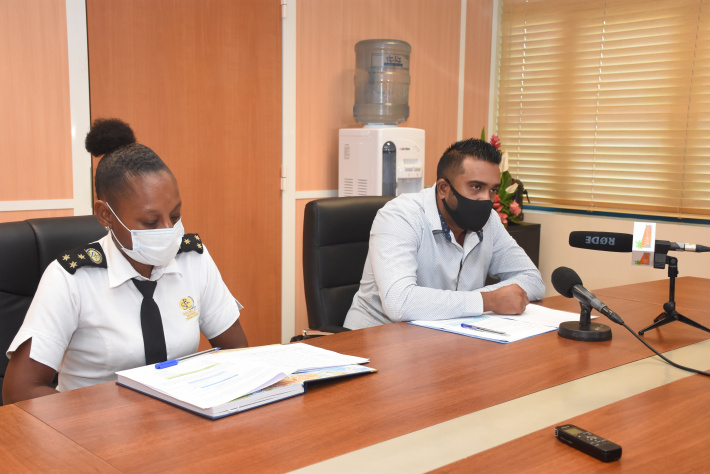 The Seychelles Revenue Commission (SRC) will as from January 2022 be implementing a new Excise Tax Act liable for payment at manufacturing level and not at disposed level as is currently the case.

The action from SRC follows the approval by the cabinet of ministers for the enactment of a new Excise Tax Act and supporting subsidiary legislations to replace the current one. The cabinet meeting which was held April 14, 2021, was chaired by President Wavel Ramkalawan and where a number of legal and policy memoranda were considered.

The Excise Tax Act, paid on the 21st of every month, is a tax levied on four excisable goods imported or locally manufactured in Seychelles: cigarettes or tobacco, alcohol, motor vehicles and petroleum products.

In a press conference at the SRC headquarters, Maison Colette, yesterday morning, the director for trade, Ashik Hassan, said the new law is in line with SRC’s vision to create an environment to make life as easy as possible for businesses so that they continue to help the economy.

He further said that the new Excise Tax will not only bring benefit to SRC but to the local manufacturers as well.

He explained that a new dispute resolution has been introduced in the bill making it easy to resolve arguments on tax implementation between the manufacturers and SRC while the manufacturers’ rights and obligations are much clearer.

Mr Hassan noted that the current Excise Tax Act, which dates back to 2009 and is among a number of our country’s tax regime, lacks certain enforcement powers, among other limitations and deficiencies that could be given to the commissioner general and the customs staff to implement the provision of the law effectively with regard to regulating local manufacturing centres for taxation.

He noted that technical assistance was sought and finalised last year with the Southern African Development Community (SADC) trade facility, for inputs to develop the modern Excise Tax Act.

He said the bill is now in the Attorney General’s office for drafting and prior to its implementation in January 2022, it will be made available by August for consultations and sensitisation and further to the National Assembly, by September, for its consideration.

On explaining the bill further, in terms of differences with the current one, the director of in-land revenue, Cindy Blakemore, said the current law makes provision for the registration of manufacturers only while the amended law will register both manufacturers and production centres.

She added that new registration method will allow SRC to have better control on the raw materials and equipment used to make the end product.

Speaking specifically on the locally made alcohol, Mrs Blakemore said that there will be a restriction on its production and that importation of stills and anything capable of being used in the distillation of alcohol will require authorisation.

She added that, not present in the current law, the new act will allow SRC to set conditions for appropriate equipment to be used so as to facilitate the work of its officers in knowing what is happening at production level, especially in the case of alcohol production.

Mrs Blakemore stated that the new act will also provide clarity on all goods lost or destroyed as a result of an accident, as well as goods not consumed or lost through unavoidable accidents.

She said the new law will allow the commissioner to develop and to establish rules as to when excisable goods are supposed to be declared consumption and to be destroyed among others.

She claimed that wastage can be a leakage in revenue and to mitigate the issue, according to the new law based of the type of manufacturer, only a certain percentage will have to be declared as wastage for refund purposes.

She stated that the new act will also allow customs officers access to the production centres for monitoring and without warning.

Mrs Blakemore noted that excise tax collected in 2020 amounted to R1.2 billion of which R963 million was collected through importation and R385 million from local production.