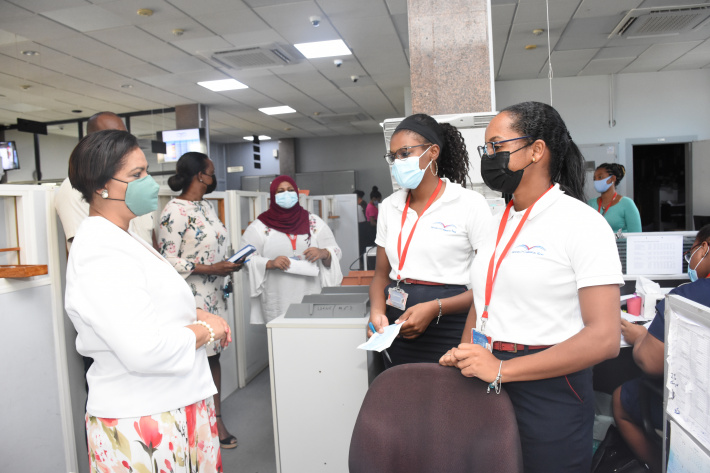 “Productivity has to continue for the country to prosper,” said Patricia Francourt, Minister for Employment and Social Affairs as she conducted a series of visits to the Seychelles Civil Aviation Authority, Seychelles Fire and Rescue Services Agency and Seychelles Commercial Bank.

The visits were conducted on Friday to commemorate International Labour Day as well as thank employees in these three organisations for their work during the pandemic.

“These organisations that we visited are not in the limelight compared to others, even though they were working continuously during the moments of restrictions while we were at home,” said Minister Francourt.

The first organisation she visited was the Seychelles Civil Aviation Authority (SCAA) where she visited the air navigation services building, safety and regulations offices and the airport fire and rescue services.

“During the restriction period in 2020 and 2021 airplanes were still coming to Seychelles to bring merchandises which meant operations were still ongoing at SCAA,” said Minister Francourt.

She noted that the employment department wants to bridge the gap and create a partnership with organisations like these to supply workers to them for training.

She noted that this will help especially the youths who are on the skills development programme to obtain a job.

“SCAA has a fantastic structure where everything is run systematically. The skill development that they offer their employees is commendable as it encourages them to stick with the organisation as they move up the ladder,” she said.

She also congratulated the organisation for the number of local workers they have as well as the development they are doing to keep in line with international standards.

During her visit, the minister had a chance to witness the landing of Air Seychelles’ first chartered flight from Bucharest, Romania and she noted that this was a treat for her as she always wanted to see a plane land from the airport tower.

During her visit, the organisations were able to voice out some of the concerns they have. At the fire and rescue services they noted that the space they have is too small especially when it comes to training their officers.

“The space they have is too small which poses great concern especially when trying to recruit new officers. They also informed me that they lack equipment,” added the minister.

The firemen also pointed out to the minister that when a fire occurs, the call first goes to the police station and then transferred to them. They noted that this is not ideal as this loss of time could have made a big difference in the outcome of the situation. They suggested that they get their own three-digit line.

The minister also visited the Seychelles Commercial Bank (SCB) at Kingsgate House across from her office, and noted that she sees how busy they are every day.

“I wanted to understand how they were running things during Covid-19 and how they are coping now, and I have seen that they are doing a fantastic job despite the constraints of the pandemic,” said the minister.

“This past year has not been easy at all which is why my message for workers’ day is about determination and resilience. No matter how hard it gets, no matter how difficult it gets, you should never give up,” pointed out the minister.

She added that at the employment department they are doing what it takes to place people in jobs.

The accompanying photos show Minister Francourt during her visits to the three work places. 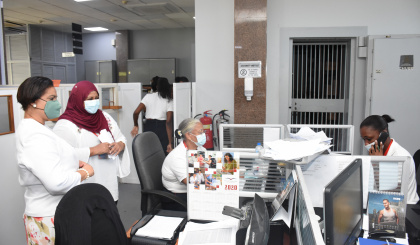