Journalists learn more about the judicial system |04 May 2021 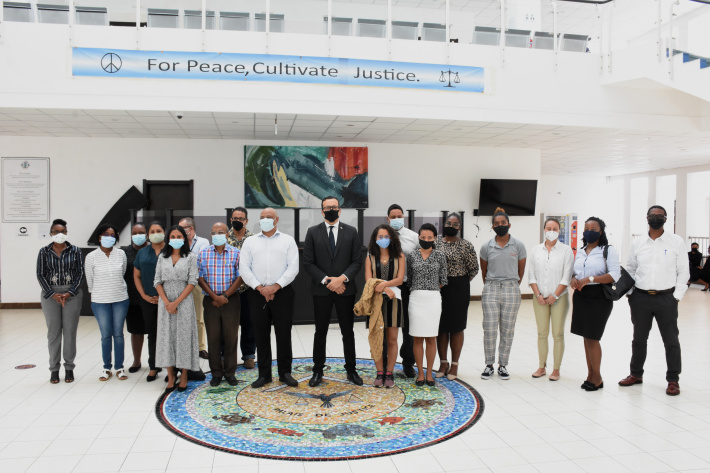 To mark World Press Freedom Day yesterday, the Judiciary conducted the first in a series of workshops to educate journalists about the judicial process and how to efficiently report on court cases and judgement.

It was the Chief Justice who officially opened the session with an address where he noted the importance of the media and judiciary working hand in hand and bridging the gap.

“It has alway been our hope to create more awareness and education on the judiciary and its function but also about the laws that govern this land. The purpose of journalism is to provide citizens with information they need to make the best possible decision about their lives, their community, society and their government,” he said.

“The reason we are having this workshop is to help journalists and reporters to better understand the court system, legal terms and the role of judicial officers in upholding and applying the rule of law. Our aim is for the media to continuously improve the way they report court cases judgements and sentences because the media is the driving force behind the public perception of our judicial system,” he added.

He noted that the Judiciary recognises that journalists and reporters perform an important and constitutionally mandated role to keep the public informed and to ensure transparency in the work of the Judiciary, and as such are the public watchdog over government institutions.

“We share a common goal, the attainment of justice for the betterment of society. The crucial role of journalism is even more relevant in the wake of the Covid-19 pandemic,” he said.

The irresponsible use of social media, which poses a threat to the way news is shared, was also discussed. CJ Govinden noted that social media has given to politically and commercially biased news in other words fake news.

He added that it is up to journalists to weave stories that are credible, fair, accurate, transparent and informative.

“One must also know how to connect relevant information and paint the bigger picture, so it is up to journalists and reporters to put their skills to good use so that when they are presented with a case they can go further and connect the dots to put the readers at the centre of what the judiciary does,” he said.

The attorney general also added that the media serve as watchdogs for the public, adding it is important that the media is promoted as it is a messenger for the judiciary.

During the workshop there were presentations on the process of prosecution and how things are run in the Attorney General's office from the moment a crime is committed to the moment a judgement is given.

There was also a session where the journalists present learned how to properly write courtroom articles by analysing and breaking down some past news coverage that had been problematic.

Sasha-Lee Marivel Alis, public relations & communications office for the Chief Justice noted that they have noticed that the media do not know the structure of the courts as well as legal terms.

She added that media freedom to report on court cases also comes with certain responsibilities.

“Journalists need to be aware of what they can and cannot say as Seychelles is a small country and there is information that is sensitive,” said Mrs Marivel Alis.

In the workshop journalists were also presented with a media access document that will help them with the proper legal terms, where to get information and the do’s and don'ts when reporting on cases. The document has been translated in English and Creole to give journalists more advantage when reporting on judicial cases.

Dominic Monthy, journalist for SBC, said that the training is essential as he has faced some difficulties in the past while reporting court cases.

“There are some instances where the jargons used are confusing especially when reporting in Creole so this workshop has come at the right time to help us accurately report the story to the public,” he said.