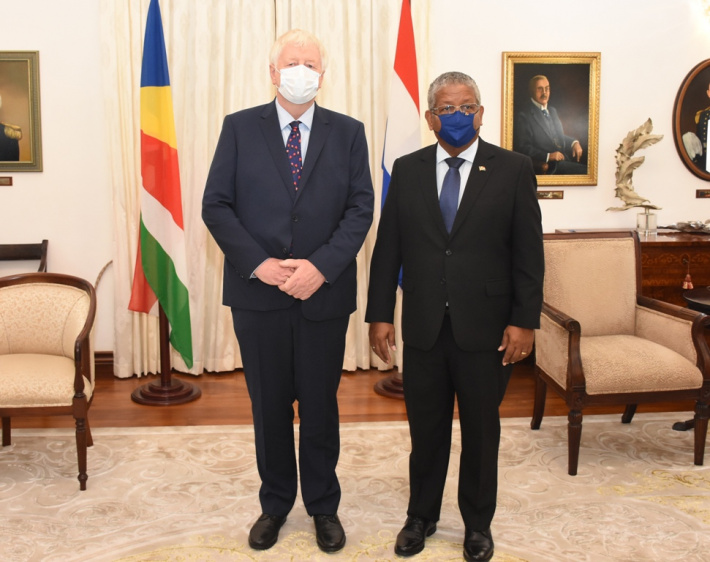 The new ambassador of the Kingdom of the Netherlands to Seychelles, Maarten Brouwer, presented his credentials to President Wavel Ramkalawan at State House yesterday morning.

The good diplomatic relations between the two countries, environment policies and human rights were among topics of discussion between President Ramkalawan and Ambassador Brouwer during the accreditation ceremony.

“We have been able to touch on a number of issues that we share and now of course Seychelles being in the middle of the ocean, and as we are coastal nations, we share the environment problems that are coming up with the rising sea level,” Ambassador Brouwer said.

He noted that the rising sea level is a main concern in The Netherlands and in terms of environment policies, he and President Ramkalawan had a lot to exchange.

“We had a good conversation and I also brought the greetings of our King, King Alexander, to the president and the people of Seychelles,” Ambassador Brouwer said.

Following his discussion with President Ramkalawan, Ambassador Brouwer paid a courtesy call on Vice-President Ahmed Afif, with whom he discussed issues about the economy, the Covid-19 pandemic and on media policies and freedom of expression.

With regard to the pandemic situation in the country, Ambassador Brouwer said that his country is passing through the same situation and that he and Vice-President Afif stressed on the need for international solidarity to combat the pandemic.

“I can only convey my solidarity to what is happening to the people of Seychelles and we hope that everybody infected will have a very quick recovery,” he said, stating that no one has the magic bullet to put an end to the pandemic.

Speaking on their discussion on media policies and freedom of expression, Ambassador Brouwer said that although some actions and measures still need to be taken, our country is totally in line with the approaches in this regard.

“Sometimes still, some actions and measures have to be taken but it has also to do a lot with building the trust in society and that you respect each other’s opinions and I get the impression that the government is working hard towards that,” Ambassador Brouwer stated.

Ambassador Brouwer, who joined foreign affairs in 1988, replaces his colleague, Ambassador Frans Makken, as ambassador to Seychelles. He will be based in Nairobi, Kenya.

He noted that as he had taken the ambassadorial post in Nairobi in 2020, his four- year term, including as ambassador to Seychelles, will end in 2024.

He was accompanied to State House by the resident consul of the Kingdom of The Netherlands to Seychelles Irina Udwadia-Van Altenborg.

Seychelles and the Kingdom of The Netherlands established diplomatic relations on April 19, 1977.