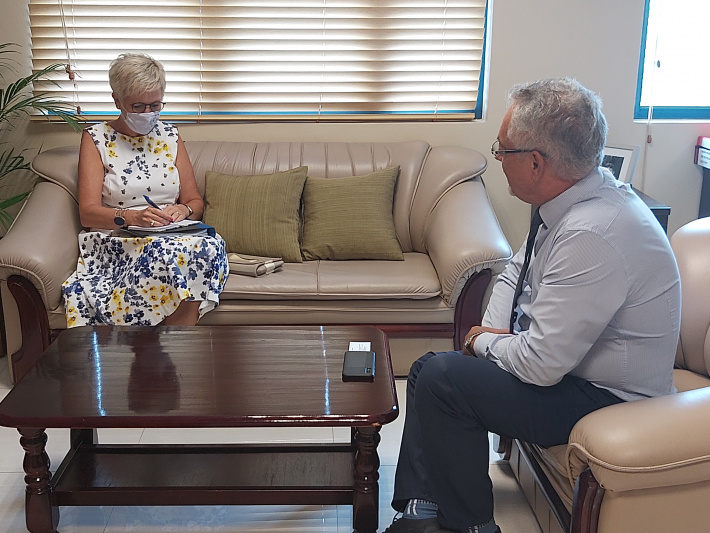 Ambassador Vicini during her meeting with Designated Minister Ferrari

The ambassador of the Kingdom of Sweden to the Republic of Seychelles, Caroline Vicini, paid a courtesy call on the Designated Minister and Minister for Fisheries and the Blue Economy, Jean-François Ferrari, on Monday morning at the ministry.

Discussions between the newly accredited Swedish ambassador and the Designated Minister centred primarily on the development of the aquaculture sector in Seychelles and efforts being made by the government to launch this sector to both local and foreign investors.

Sweden is regarded as a leader in the aquaculture sector across Europe which, according to the Food and Agriculture Organisation (FAO), accounts to 6% in the total fish production of the country.

Rainbow trout is the most important species that is farmed in Sweden, alongside chars, blue mussels, oysters and crayfish.

Minister Ferrari informed the ambassador that the aquaculture regulations for Seychelles will be finalised in the third quarter of the year, thereafter the country will be counting on the technical expertise of Sweden in research and development capabilities to bring this sub-sector to the next level.

Discussions also revolved around new business opportunities such as the cultivation of algae to encourage foreign direct investments in Seychelles’ biotechnology, biomedical and cosmetics industry for the diversification of the blue economy sector.

Ambassador Vicini on her part congratulated the Seychelles government in being the first country to publish its Fisheries Transparency Initiative (FiTI) report and for continuous efforts in addressing fishing challenges especially with regard to the management of fish stocks and the balance between conservation and development.

Ambassador Vicini was accompanied on her visit by Seychelles honorary consul to Sweden, Chrystold Chetty.

Press release from the Ministry of Fisheries and The Blue Economy