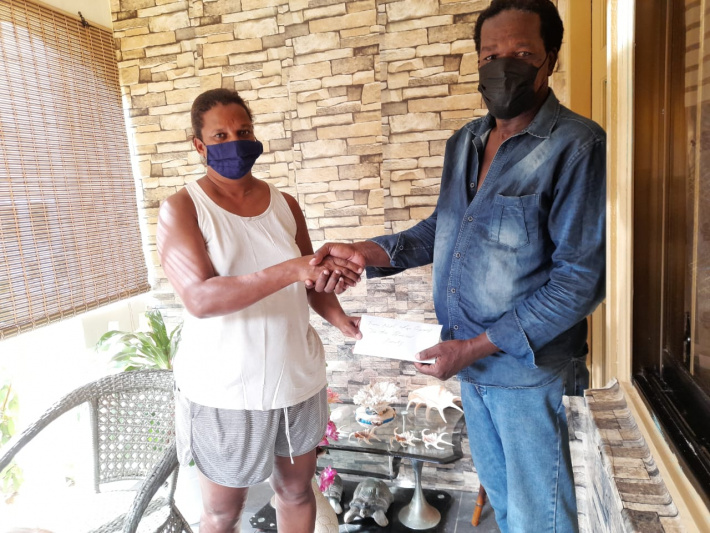 Mr Dogley hands over the donation to the victim

The Next Step band has made a cash donation to the family whose house was gutted by fire at Pointe Larue recently.

The Next Step band leader Sonny Dogley said it was really heartbreaking to hear the devastating news especially at a time when many families are struggling to cope with the financial impacts of the Covid-19 pandemic.

Other than the cash donation from the band, Mr Dogley said they also knocked on the doors of a few companies and three of them responded positively and provided some assistance to the family.

“For us too it is presently hard to organise our usual fundraising activities to help such causes but all the same we managed to get some support from a few companies who provided the family some assistance and for that we are really grateful,” Mr Dogley said.

Mr Dogley added that to remain active and relevant the Next Step band is focusing on raising awareness on the public health measures in the community.

On June 8 some Next Step band members took part in the Ocean Day activity –collecting plastic rubbish near the shoreline at Ile Du Port.

Meanwhile Mr Dogley said the band will be making a donation to help citizens of Madagascar and he is extending his heartfelt gratitude to the following companies and individuals who believe in the band and have helped and supported them – Hari Builders, Raja Gopal Turner Shop, RCA Cleaning Agency, Dr Carol Nalletamby and Mr Kambatha.