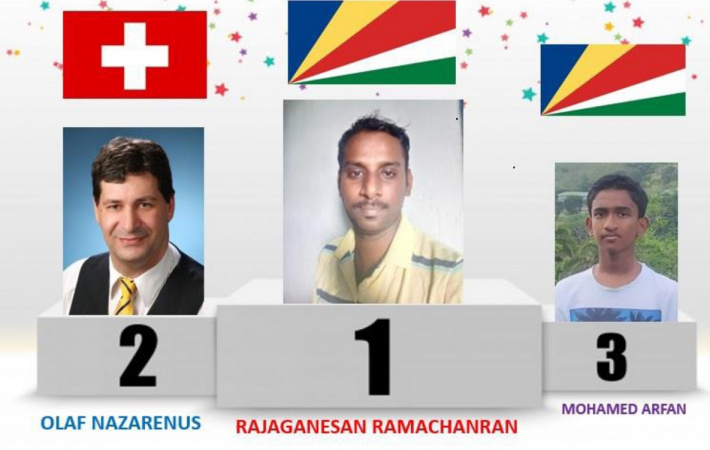 The top three finishers of the ‘commemorative’ tournament

To commemorate the International Chess Day which is on July 20, the sport’s local governing body hosted an international tournament, attracting guests from the Philippines and Switzerland who battled alongside our local players.

Representing Seychelles, RajaganesanRamachanran garnered a grand total of eight (8) points to ensure that top prize of the tournament stayed in the country.

Grand winner Ramachanran who won six games out of nine, said he was very happy and really enjoyed the tournament.

He also added that he is excited to take part in more competitions that will be organised.

In a friendly message from Switzerland, runner-up Nazarenus said he really enjoyed playing in a well-organised tournament and praised the Seychelles Chess Federation (SCF) and its chairman Benjamin Hoareau for “a job well done.”

He added that “this is a good example of how the sport of chess can cultivate friendship all over the world.”

The idea to celebrate this day as the international chess day was proposed by the United Nations Educational, Scientific and Cultural Organisation (Unesco), and it has been celebrated as such since 1966,after it was established by Fide. Fide, which has 181 chess federations as members, organises chess events and competitions around the world on this day.

As recently as 2013, the international chess day was celebrated in 178 countries, according to Fide president KirsanIlyumzhinov.

On December 12, 2019, the United Nations General Assembly unanimously approved a resolution recognising the day.The day is celebrated by many of the 605 million regular chess players around the world.

The United Nations recognises that sports, the arts and physical activity have the power to change perceptions, prejudices and behaviours, as well as to inspire people, break down racial and political barriers, combat discrimination and defuse conflict, and therefore contribute in promoting education, sustainable development, peace, cooperation, solidarity, social inclusion and health at local, regional and international levels.

Chess is one of the most ancient, intellectual and cultural games, with a combination of sport, scientific thinking and elements of art. As an affordable and inclusive activity, it can be exercised anywhere and played by all, across the barriers of language, age, gender, physical ability or social status.

Chess is a global game, which promotes fairness, inclusion and mutual respect, and noting in this regard that it can contribute to an atmosphere of tolerance and understanding among peoples and nations.

Chess also offers important opportunities in the implementation of the 2030 Agenda for Sustainable Development and the sustainable development goals, including strengthening education, realising gender equality and the empowerment of women and girls and fostering inclusion, tolerance, mutual understanding and respect.

The history of chess

The history of chess can be traced back nearly 1,500 years, although its earliest origins are uncertain. The earliest predecessor of the game probably originated in India by the 7th century CE, from where it spread to Persia.

Following the Arab invasion and conquest of Persia, chess was taken up by the Muslim world and subsequently spread to southern Europe.

By the European Middle Ages, the game evolved roughly into its current form by the 15th century.

"Romantic chess" was the predominant playing style from the late 18th century to the 1880s.

Chess games of this period emphasised more on quick, tactical manoeuvres rather than long-term strategic planning.

The Romantic era of play was followed by the scientific, hypermodern, and new dynamism eras.

In the second half of the 19th century, modern chess tournament play began, and the first official World Chess Championship was held in 1886.

The 20th century saw great leaps forward in chess theory and the establishment of the World Chess Federation.

In 1997, an IBM supercomputer beat Garry Kasparov, the then world chess champion, in the famous Deep Blue versus Garry Kasparov match, ushering the game into an era of computer domination. Since then, computer analysis – which originated in the 1970s with the first programmed chess games on the market – has contributed to much of the development in chess theory and has become an important part of preparation in professional human chess.

Later developments in the 21st century made the use of computer analysis far surpassing the ability of any human player accessible to the public. Online gaming, which first appeared in the mid-1990s, also became popular in the 21st century. 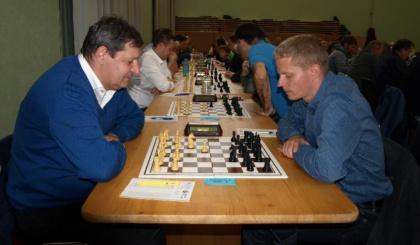 Chess is one of the most ancient, intellectual and cultural games 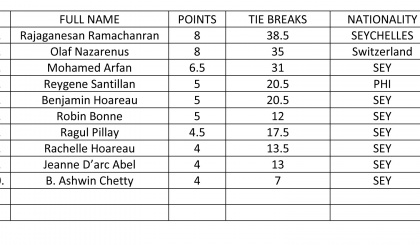