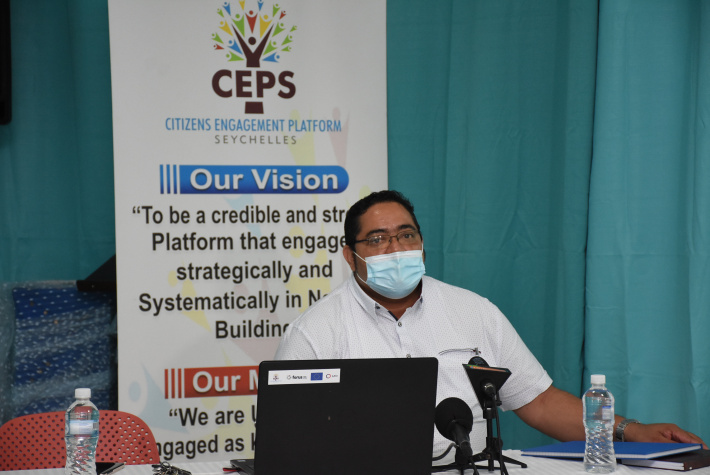 The Citizens Engagement Platform Seychelles has resumed its full operations while abiding to the strict health measures in place against Covid-19, its chief executive Alvin Laurence announced yesterday.

Mr Laurence, who assumed the position of chief executive of the Citizens Engagement Platform Seychelles (Ceps) a few months ago, said even though they have resumed full operationsat the same time they are following the guidelines of the Ministry of Health, and because of this there are slight changes in the services being offered by the platform.

Furthermore, he added that soon a new board of directors will be elected during Ceps’forthcoming annual general meeting as the mandate of the previous one has expired.

Among some of the adjustments, Mr Laurence said the Ceps conference room which was used for meetings and presentations can no longer accommodate full capacity because of social distancing, however he said Ceps’ partnership with governmental, private and parastatal agencies is still ongoing and so far he has met with over 62 representatives from multiple organisations to see how they are adapting to the changes brought about by the pandemic.

Mr Laurence also noted that Ceps has attended its first international conference, this was the youth for peace seminar in Ethiopia with Seychelles being represented by Yannick Meme. Having said that, Mr Laurence stated that all international meetings are being conducted virtually in order to save resources.

During the press briefing, Mr Laurence also announced that they will be re-launching the Citizens Advice Bureau (CAB) which had ceased operations because of the pandemic.

Initiated under Ceps’ predecessor Lungos, the CAB was launched in 2015 and its aim is to provide advice, information and outreach services to the general public on any topic within the context of their rights and responsibilities.

“We encourage members of the public to make use of this service and contact Ceps on 4325550/2501260 and set up an appointment. For now I am seeing members of the public every Tuesday morning and once I have heard their concerns I will bring them forward to the concerned bodies and work on solving them,” Mr Laurence said.

He highlighted that one common issue being brought to Ceps’ attention by members of the public is the cost of living which is affecting many families in Seychelles.

“From our discussions and meetings we have noted that unemployment and redundancies are the main factors affecting the lives of many families. The public needs more information on where they can go to receive assistance and help in managing the little money they have. Many non-governmental organisations (NGOs) and government departments are offering their services and we have also met with the Agency for Social Protection to address this issue further,” Mr Laurence said.

Mr Laurence also encouraged parents to come forward and seek assistance if they need financial help for their children.

Meanwhile, Mr Laurence has remarked that a number of NGOs registered with Ceps have ceased operations in the last year because of economic constraints from the pandemic.

“Many have had to lay off employees because they couldn’t afford to pay them a salary as they weren’t receiving any funds,” he added.

Mr Laurence also touched on the economic reform that will take place in the coming months and noted that Ceps will be organising multiple consultative meetings with the government and the public regarding the International Monetary Fund (IMF) reforms.

Moreover, he stated that these talks will take place in collaboration with the ministry of finance as they have requested for the ministry to provide them with the venue for these meetings as well as technicians who can explain the reform to NGOs and the general public.

“After each meeting, Ceps will take note of all points raised and compile a report that will be shared with the press as well as the concerned parties, the first report will be presented at the start of August,” he said.

The report will also be served as a way to present suggestions raised during the meetings regarding the economic reforms. He explained that all opinions and suggestions will be presented regardless of political affiliations or social class.