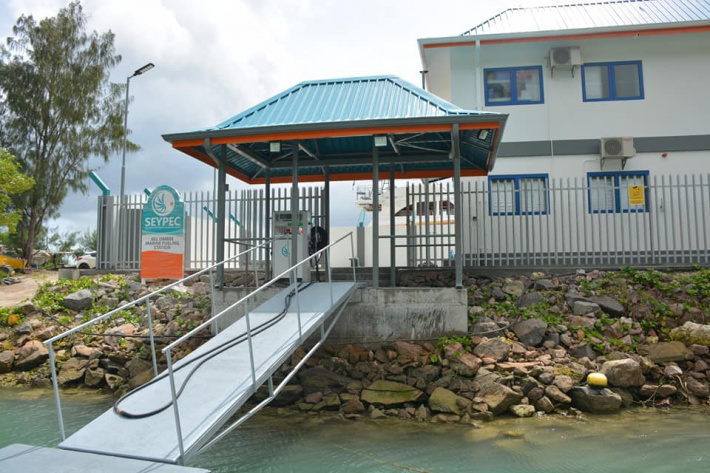 The facility has been specifically designed to cater for the marine sector, providing a hassle-free set-up whereby small to medium sized vessels may dock alongside and receive fuel directly into their tanks.

The construction of this permanent new facility was decided following the plan to renovate the Beau Vallon petrol station.

Instead of constructing a temporary outlet, the Seychelles Petroleum Company (Seypec) opted for the facility to offer a permanent service to the marine community, particularly to the fishermen and other boat operators in north Mahe.

The Bel Ombre marine fuelling station will be dispensing both motor gasoline (unleaded) and gasoil (diesel) through two tanks of 22,500 litres respectively.

This represents 30% of fuel presently sold to boat users at the Beau Vallon station. Fuel is served by one dispenser for gasoil and one for unleaded motor gasoline and this dispensing equipment can be increased to two each in the future, depending on the volume of sales.

In addition to fuel, a host of lubricants and marine accessories will be on sale at the outlet. Electronic means of payment shall be made available for all transactions.

The pontoon at the station can accommodate up to four boats at a time, based on a maximum boat length of six metres. The minimum draft is 2.2 metres at low tide and the maximum is 3.9 metres at high tide. The Bel Ombre marine refuelling station will operate between 6am and 6.30pm daily.