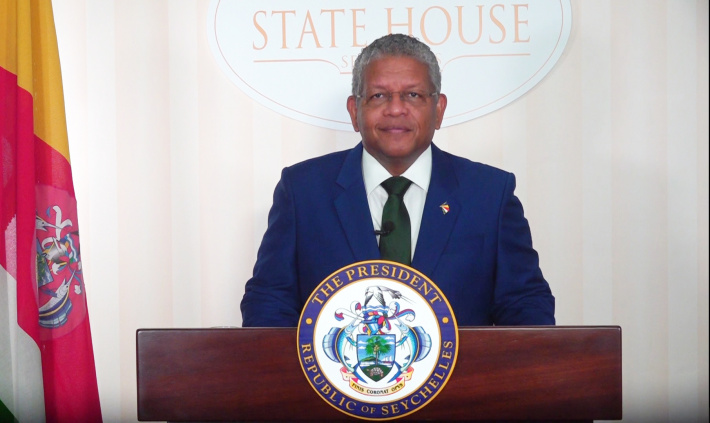 “It is imperative that member countries of the United Nations take deliberate, collaborative and decisive actions to guarantee a future that leaves no one behind.”

President Wavel Ramkalawan said this when he joined other world leaders virtually for the 76th Session of the United Nations General Assembly being held at the UN headquarters in New York, United States of America.

The theme for the 76th session is ‘Building Resilience through hope to recover from Covid-19, rebuild sustainably, respond to the needs of the planet, respect the rights of people, and revitalise the United Nations’.

Due to the global pandemic, President Ramkalawan are among some of the other heads of States and Government who provided pre-recorded statements to be delivered at UNGA76.

Addressing the assembly for the general debate, he called for urgent attention to be given to the most vulnerable countries in the midst of the global pandemic with particular reference to small islands developing states (Sids).

He congratulated the new elected president of the 76th session of the United Nations General Assembly, Abdulla Shahid of the Maldives, and conveyed deep appreciation to his predecessor, Volkan Bozkir.

He also congratulated secretary general António Guterres on his re-appointment for a second term and for his leadership of the United Nations during these unprecedented times.

President Ramkalawan highlighted the struggle and global impact of the Covid-19 pandemic since it started two years ago and the need for leaders attending the session to reflect on how to address pressing issues such as effective and equitable access to health care, glaring inequalities, climate change and environmental degradation, the arms race, endless conflicts, the plight of refugees, among others.

“As we enter the second year of the UN decade of action, it is imperative that we, as a community of nations, take deliberate, collaborative and decisive actions to guarantee a future that leaves no one behind. In recalling our commitments to the Universal Declaration of Human Rights and related treaties, let us remind ourselves that the most vulnerable people – those living in dire conditions and facing seemingly insurmountable crises – require special attention and help,” said President Ramkalawan.

He added: “Indeed, while the pandemic has brought about untold suffering, devastated global health systems, severely impacted the world economy and impoverished entire communities, the crisis at hand presents an opportunity to reinvigorate our collective will to bring about positive changes, with emphasis on equitable, sustainable, and inclusive governance.”

President Ramkalawan also drew the assembly’s attention to the economic imbalances and inequalities that exist, especially in Africa and other less developed parts of the world.

He called for equal availability and distribution of vaccine and urged the international community to assist the world’s most vulnerable economies in enhancing their resilience to future shocks.

He also took the opportunity to make mention as to how Seychelles has also been affected by the pandemic, especially the tourism industry.

Furthermore, forgoing some of the hard-earned economic gains in order to implement contingency plans, focused on protecting the population. There, the president made an appeal for the member states of the United Nations to take into considerations the plights of those facing threats of an existential nature, most notably Sids.

He noted that the application of the Vulnerability Index, therefore, remains the only coherent and viable approach and strategy to resolving the current predicament.

“Our vulnerabilities are well known and they need not be expounded on here. What needs to be stressed, however, is that a “one-size-fits-all” approach to debt relief and concessionary financial flows is certainly not the most appropriate for us. An approach and a strategy, which take into account our vulnerabilities and characteristics, would bolster our own efforts to weather the present crisis and to strengthen our capabilities to recover and rebound from the economic fallout caused by the pandemic,” said President Ramkalawan.

He further added that “most Sids have achieved middle to high-income status through hard work and commitment for the betterment of our peoples, but it appears that we are being penalised for our success, penalised for our achievements and hard work. Are the international financial institutions taking our vulnerabilities into consideration? The review of the criteria to measure development support and access to funding is still being debated incessantly in countless fora, with no end in sight. Lack of effective and appropriate global support for Sids will have systemic consequences on our progress on practically all sustainable development goals.”

The head of state also highlighted the impacts of climate change and called on world leaders to take decisive action to protect the planet for future generations. President Ramkalawan also underlined the need to embrace multilateralism. He said that multilateralism is key to ensuring prosperity and lasting peace and called on the assembly to restore hope and belief in the UN. In rebuilding trust between nations, surpassing all forms of discrimination and to instil tolerance.

“Never have we, as a community of nations, been beset with challenges of the present magnitude. But there is hope. Hope that we can overcome them. There is hope that we can overcome the challenges that we face through collective action, global solidarity and with political will. As the leader of one of the smallest nations of the world, I strongly believe in the capacity of our people, especially our youth. I believe, above all, in the capacity of humanity. I believe in our capacity to do good. Together, as the representatives of our planet, we can do what is expected of us,” concluded the president.