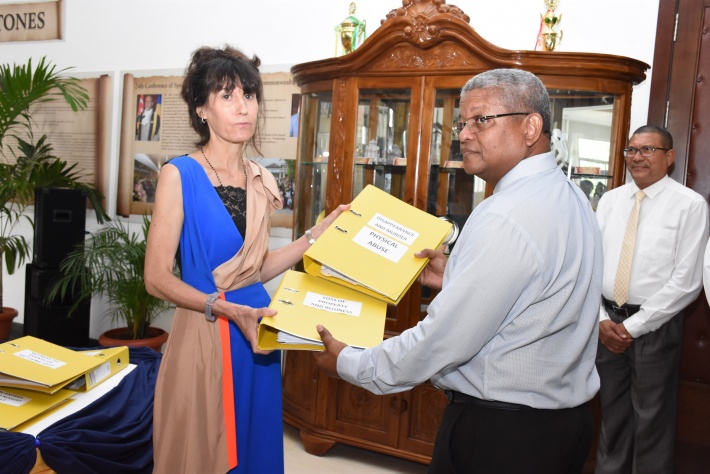 Hon. Ramkalawan hands over the files to Mrs McIntyre

The 10 classified files containing 315 classified grievance forms from the different complainants that were in the possession of the Committee on Truth, Reconciliation and National Unity in the National Assembly were officially handed over by its chairperson and also leader of the opposition Wavel Ramkalawan to the chairperson of the Truth, Reconciliation and National Unity Commission-Gabrielle Mclntyre, in a symbolic ceremony held in the lobby of the National Assembly yesterday afternoon.

Some of the classified files include that of detainment/political exiles, loss of property and business, disappearance and murder, wrongful arrest, physical abuse, kidnapping cases, and wrongful termination from work/other work related issues among others.

The commission has three years to complete the task.

With the files in hand, it also officially marked the launch of the work mandate of the commission as per its act as was stated by Mrs Mclntyre in June 2019 during the swearing in of the two last members of the commission.

The commission’s mandate will allow both victims and perpetrators to come forward and tell their stories and evidence given will not be admissible in any civil or criminal proceedings since its aim is not to prosecute but to repair open wounds for national unity.

Addressing the gathering, Hon. Ramkalawan said he was very pleased that the 6th National Assembly took the advantage and made good use of the golden opportunity to appoint the seven-member National Assembly committee (three from the ruling party and four from the majority in the National Assembly) to kick start the truth, reconciliation and national unity process which has resulted in the formation of a law and the establishment of an independent commission.

“We felt that it was important to help our people put closure to many sad events which had happened as a result of the coup of June 5, 1977,” Hon. Ramkalawan said, admitting that it would be a hard task for the new commission to handle due to the many stories and tragedies they will have to dealt with.

He said that the law in place will facilitate the work that the commission will have to undertake in helping the members of the community to put closure to many sad events of the past 40 years.

Hon. Ramkalawan futher said that the decision taken in the first place by the assembly committee was for the National Assembly not to be the commission to listen to cases or settle grievances but only to gather information so as to draft the law to guide the work of the independent commission.

Apart from the difficult side of the task of the commission, Hon. Ramkalawan said that the consolation side is that many victims have already put closure to this sad past.

He noted that since the work of the assembly commission is over, the members will be available for interaction and will continue to offer their full support at the demand of the independent commission.

Hon. Ramkalawan later said that all complainants have been advised on the move of their case files to the newly appointed commission as the National Assembly will no longer take up further cases.

Taking the stand after Hon. Ramkalawan, Mrs Mclntyre said that in everything it does, the commission is to adhere fully to international human rights norms and appropriate international fair trial standards and will demonstrate respect for the right to dignity of suspects, perpetrators victims and witnesses.

She noted that ultimately through its work, the commission’s objective is to unite the people of Seychelles around a common agenda that will help them to move forward in confidence and with a sense of common purpose.

“The success of the commission will in part fall on the commission, how the commission conducts itself, how it treats people who come before it, how it chooses to exercise its extensive powers and its efficiency in coming to determinations and decisions,” Mrs Mclntyre said.

The vice-chairperson of the commission, Michael Green, said with their mandate starting as of yesterday, new complainants have six months from now (until February 2020) to file in their cases with the commission.

He said that files and the documents inside obtained from the National Assembly will be numbered, scanned and be stored electronically.

Mr Green further said that the complainants of those files will have to contact the commission for the commission to get their approval to carry on with their cases. He said they could either come to the commission or use other usual basic norms of communication.

The Truth, Reconciliation and National Unity Commission is temporarily based at the Bel Air Complex, behind ‘Hot Bread’ bakery situated at the junction of the St Louis – Bel Air road.