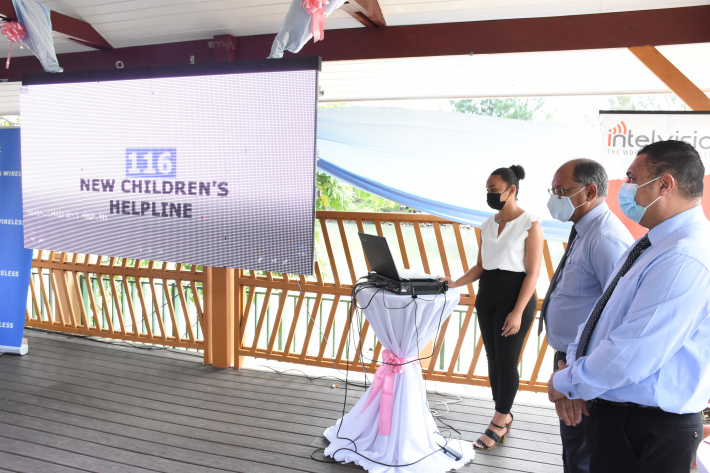 Children who feel they are being abused or need advice and guidance in times of difficulties and distress can now just call 116 for assistance.

The free, three-digit helpline number, also to be used by adults to report child abuse cases, was officially unveiled by Vice-President  Ahmed Afif in a ceremony held at the Paradis Des Enfants on Saturday morning to commemorate Universal Children’s Day, which also fell on Saturday.

The helpline number has been made possible through the guidance and support of the Department of Information Communication Technology (DICT) in collaboration with telecommunication service providers Cable and Wireless,  Airtel, Intelvision and Kokonet. The calls will be taken up by confidential peer workers from the social affairs department.

The department, under the aegis of the Ministry of Employment and Social Affairs, has found it necessary to create this short helpline number to replace the seven-digit numbers that had been in service in an effort to make it easier for the children to remember and quicker for them to dial. The number was activated by Neliza Laboudallon who had a direct conversation with a social worker at the other end.

The pledges to demonstrate the commitment of the four telecom companies to ensure a free telephone service that will be used for the benefit of the children, were presented to the principal secretary for social affairs, Linda William Melanie, by a representative from each company.

The Children’s Helpline was established in early 1990 as a six-digit number then and later a seven-digit number by Cable and Wireless Seychelles. It came about after Seychelles had ratified the UN Convention on the Rights of the Child that same year. This service is and remains an essential tool for child protection service in the country as it allows not only children in risk situations to access services but also for concerned adults who have information about a child at risk to report the matter to social services for intervention. Social workers have steadfastly manned the children’s helpline over the years, often having to respond to the cry for help in the dead hours of the night.

In her opening remarks to mark the occasion, the Minister for Employment and Social Affairs, Patricia Francourt, said that the social affairs department and the National Commission for Child Protection have relentlessly pushed government to address legislative and institutional changes and policies that are in the best interest of children and in compliance with the United Nation’s Convention on the Rights of the Child.

“What better way to commemorate Universal Children’s Day if not through this testimony of the strong public private partnership model demonstrated by the commitment and generosity of our local telecommunication partners. As we always say ‘child protection is everyone’s business’ and our telecommunication partners could not have chosen a better cause than to be the service of the children of Seychelles to ensure their right to protection,” said the minister, who thanked the service providers for making a difference in the lives of children at risk of immediate harm.

Minister Francourt called on the children to use the number wisely to access the service and also when necessary.

On the part of the four telecom companies, the director for human resource and administration at Cable and Wireless, Thomas Dauban, said that his company and others represented were very proud to be part of the great initiative to help protect the children at risk.

In her vote of thanks, 9-year-old Lia Antoine said that she and her other colleague children are very thankful for all that is being done by the government to ensure that all Seychellois children are protected and their rights are being valued and respected.

“With this new number, it will be much easier for us to remember and to make the call in the event that we see ourselves in difficulties or experiencing forms of abuses,” she added, with a big thank you.

There were tokens of appreciation presented by children to stakeholders and partners present and who are contributing or playing a role in the protection of children. The ceremony was blessed by Sister Romia Mahafaly from Foyer de Nazareth, ending with a song entitled ‘Lespwar’ sung by Tyra Thelemaque.

The accompanying photographs show some highlights of the ceremony to unveil the new helpline number. 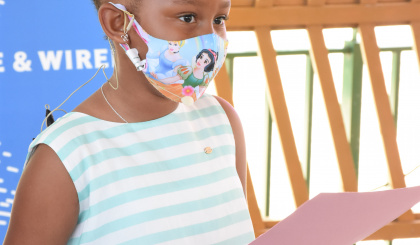 Lia Antoine reading her vote of thanks 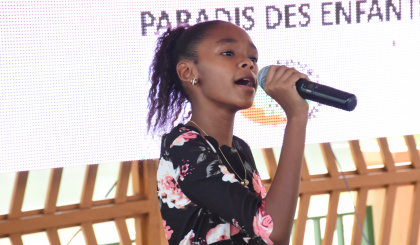 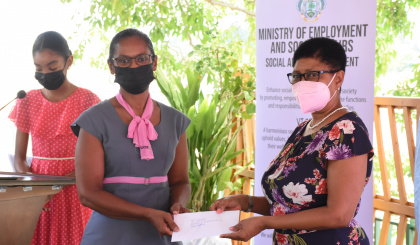 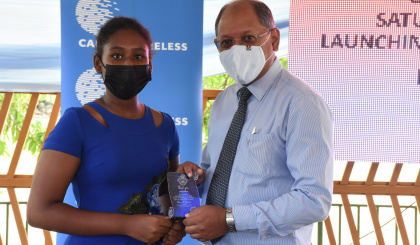 A token of appreciation to Vice-President Afif 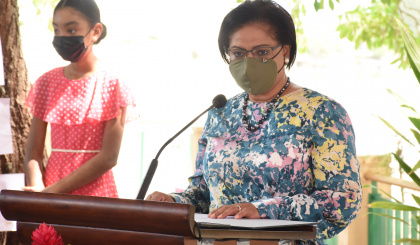 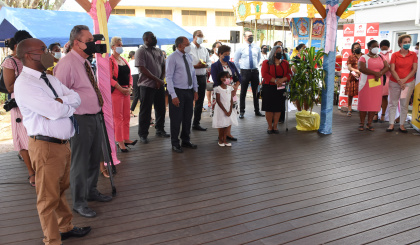 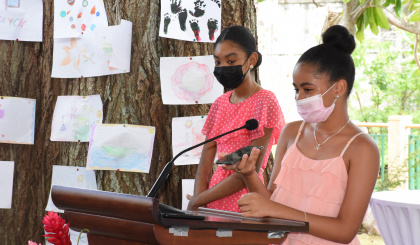 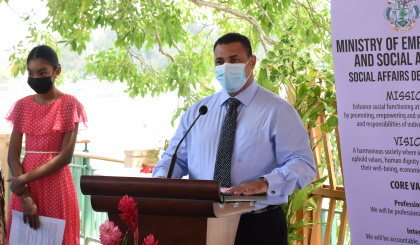 Mr Dauban speaking on behalf of the telecom companies 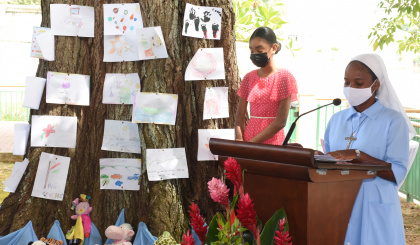