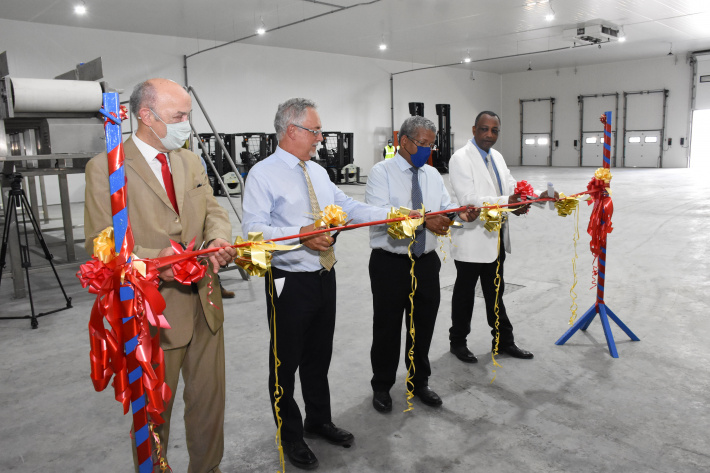 The Central Command Cold Store (CCCS) situated in Zone 14, Ile du Port, was officially opened on Tuesday, five years on from the commencement of construction works.

In a ceremony held on Tuesday afternoon, President Wavel Ramkalawan, Minister for Fisheries and the Blue Economy Jean-François Ferrari, chairman of CCCS Peter Sinon, and chairman of Jaccar Phillippe Soulié all cut the ribbon, symbolic of the official opening of the 12,600-tonne capacity facility at a cost of USD ($) 37 million.

The cold store received its first load of 70 tonnes on Monday, from industrial vessels.

According to chairman Sinon, the cold store’s main client is the Indian Ocean Tuna (IOT) factory, who is committed to 5000 tonnes, even at the inception of the project.

It features spaces and loaders to load fish from vessels and to facilitate sorting by type and further, by size, adding value to the stock. To the back of the facility are generators, condensers and fuel tanks allowing the facility to generate its own electricity.

In his keynote address, Minister Ferrari hailed the project as an opportunity for the nation in opening doors for the workforce and earning much-needed revenue for the country.

The minister also described the project as one which is fitting with government’s plans to make Ile du Port the centre for fish processing, exemplifying the commitment for close partnership with the private sector.

“This equates to a majority Seychellois venture, and this in itself is a great achievement, knowing how hard it is to get local entrepreneurs to come together to realise projects that they would never do on their own. We believe that the private sector is much better at running business and that the role of government should be to open doors, offer opportunities and facilitate business,” Minister Ferrari said.

“We are on a journey to restore Seychelles to its rightful place as the Tuna Hub of the Indian Ocean and today is an important milestone on this journey.” Minister Ferrari congratulated the investors, wishing them the very best.

Chairman Sinon noted that the project commenced in 2016 with piling and preparation works on the reclaimed site. The project advanced fairly well until the Covid-19 pandemic, which led to delays, and extension of work payments to cover timeframes where workers on the project were sick.

“Most of what we see in this facility, 99.9 percent is imported, except for the concrete flooring. We found ourselves in a situation whereby freight charges had more than doubled, and the prices had also increased with inflation, so at some point we were really concerned with our budget and if we would come to make it finally. But through some cooperation with Ile du Port Handling Services (IPHS), we got a loan supplement to take us across the line, and we managed to complete it,” Mr Sinon said.

“The challenge we will face of course is to get persons skilled in certain domains. It is possible that we will have to obtain certain GOPs for certain positions but up until now we are prioritising Seychellois. So far we have had over 115 who have shown an interest and applied, so we need to interview, review their skills, so this will be another opportunity for Seychellois workers, young employees, we have forklifts, weighing sections to weigh the fish, keep the records so there is quite some work for our people” he noted.

The accompanying photographs show some highlights of the launch ceremony on Tuesday. 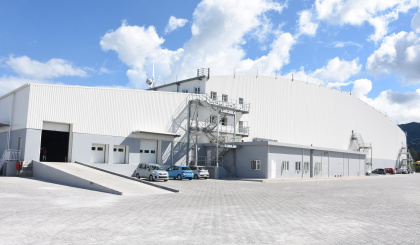 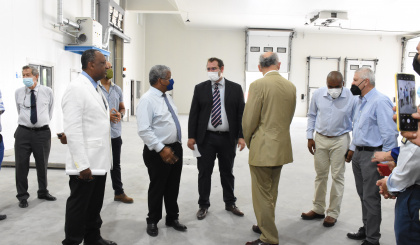 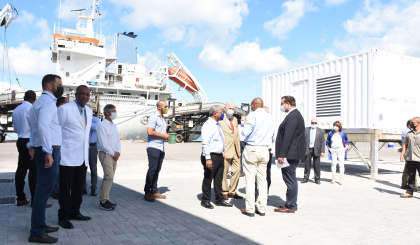 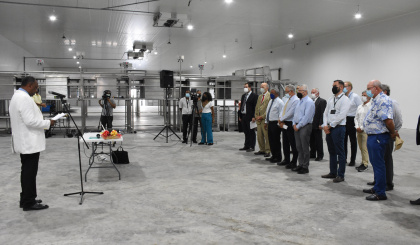