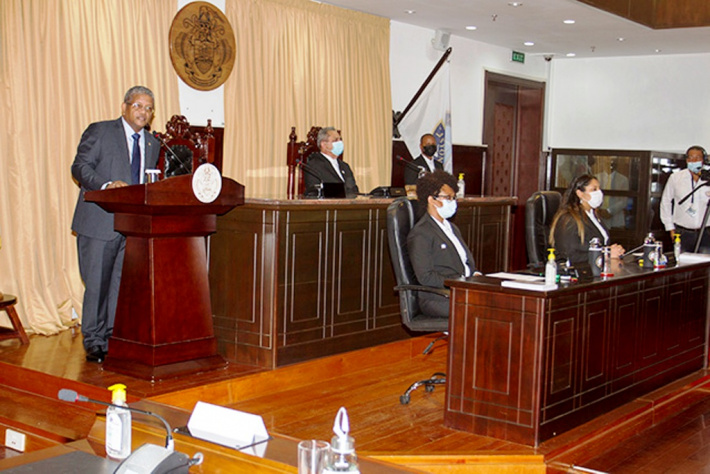 October 26 marked one year since Wavel John Charles Ramkalawan of the Linyon Demokratik Seselwa (LDS) was inaugurated into office, as the fifth President of the Republic of Seychelles.

The past year has presented the head of state and administration with some arduous challenges and tough decisions to remedy the economic downturn and public health emergency threatening the country.

The accelerated national immunisation campaign against the coronavirus officially kicked off on Sunday January 10, with the President as the first person to be administered the Sinopharm vaccine.

The President made a call for contributions towards the campaign, through the newly established Covid-19 Relief Fund with the Central Bank of Seychelles. Over the course of the year, a sum of R78 million was donated towards pandemic-related costs, including allowances for health workers and personal protective equipment.

A total of 50,000 doses of the Covishield vaccine donated by the government of India arrived in the country aboard Indian Navy Aircraft ‘Boeing P8I’ on January 23.

He asserted the necessity to significantly cut back budget heads in the 2021 appropriation, namely, R125 million in housing rent for expatriates, R187 million in office rentals, R195 million in security services for government institutions, three budget headings that amount to R507 million annually, and which the country cannot afford with the economic downturn.

The first phase of the Government restructuring was announced on February 1, with the objective of reducing government spending, across the Cabinet.

The President went on an official mission to the UAE between February 19 to 22, where he managed to secure 25,000 doses of the Covishield vaccine from private investors and businesses. The head of state also partook in negotiations relating to the Air Seychelles and Etihad partnership agreement.

Minister for Foreign Affairs and Tourism Sylvestre Radegonde signed two new cooperation agreements in the fields of military and sports, signaling a new era in bilateral relations between Seychelles and Qatar. The minister accompanied President Ramkalawan to the official state visit from March 20 to 23.

Minister for Finance, Economic Planning and Trade Naadir Hassan said the emphasis is on sustainability and relaunching the economy amid the hard-hitting pandemic.

Changes within ministries, departments and agencies

Further changes to the Ministry of Tourism and Seychelles Tourism Board (STB), within the ministries responsible for education and environment, were unveiled, in addition to the process for appointment of district administrators (DA).

On the occasion of National Day and the 45th anniversary of the independence of the Republic of Seychelles from Britain, the President reiterated his call to the nation for solidarity and unity to overcome the Covid-19 pandemic and other hurdles.

President Ramkalawan arrived in Austria for a working visit on June 30, at the invitation of Austrian President Alexander Van der Bellen.

The Seychelles authorities and International Monetary Fund (IMF) reached a staff-level agreement on a US $107 million arrangement under the Extended Fund Facility (EFF) to help Seychelles undergo economic reforms, it was announced on July 7.

Following a special meeting with the board of directors of Air Seychelles on August 27, President Ramkalawan gave instructions for the creation of a new high-level committee led by Designated Minister Jean-François Ferrari, Minister for Finance, Economic planning and Trade Naadir Hassan, Minister for Transport Antony Derjacques, and four directors nominated by the Board of Air Seychelles, tasking them with the responsibility of engaging in discussions and negotiations with representatives of the Bond Holders, Apex Corporate Trustees (UK).

The first batch of 35,000 Pfizer vaccines arrived in the country on the morning of September 8, 2021, a donation from the United States (US) government, under the COVAX scheme.

With the arrival of the vaccines, the adolescent population of 12-17 year olds were covered, as well as other vulnerable target groups in the population. A second consignment of donated 30,000 doses arrived in the country before the end of the month.

Government on October 1 launched a scheme for the return of land acquired by government between 1977 and 1993 and which was forcibly sold to government under private agreements to be returned subject to certain conditions. The scheme was established following the subsequent volume of land claims before the Truth, Reconciliation and National Unity Commission (TRNUC).

Seychelles was on October 5 removed from the European Union list of non-cooperative jurisdictions, along with Anguilla and Dominica.

President WavelRamkalawan assented to the Penal Code Amendment Act (2021), which was approved by the National Assembly on October 6, officially removing criminal defamation from the Penal Code.

The Act has two main objectives, the main one being the removal of criminal defamation from the law.

Official mission to UAE and COP 26

The head of state was on an overseas mission to Dubai, to attend EXPO 2020 from October 26 to October 30. While there, he visited the Seychelles' Pavilion ‘National Day’ event and gave an exclusive interview to CNN.President Ramkalawan then proceeded to Glasgow, Scotland from October 30 to November 3, where he, accompanied by a delegation, attended the Heads of State and Government high-level segment as part of the World Leaders’ Summit at COP26.

During the summit, he delivered a passionate address about the plight of small-island states in terms of climate change, at the expense of larger industrialised countries.

November saw the President assenting to important pieces of legislation, including the Physical Planning Bill, 2021 and the Seychelles Infrastructure Agency Bill, 2021. Earlier during the month, he assented to the Inquest into death Bill, 2021. 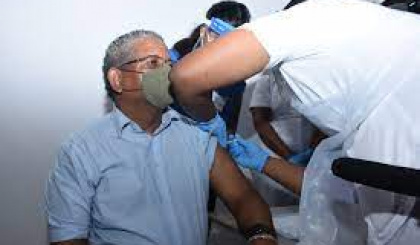 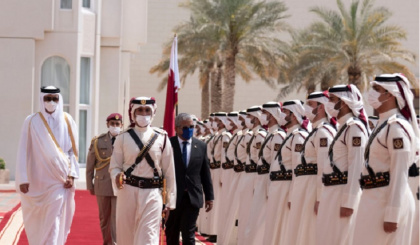 President Ramkalawan on his arrival at the Hamad International Airport in Doha, Qatar 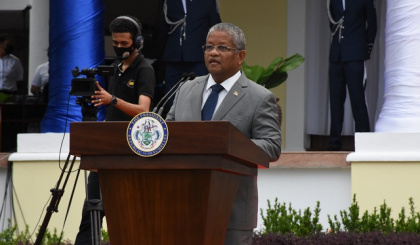 On the occasion of National Day and the 45th anniversary of the independence of the Republic of Seychelles from Britain,President Ramkalawan reiterated his call to the nation for solidarity and unity to overcome the Covid-19 pandemic and other hurdles 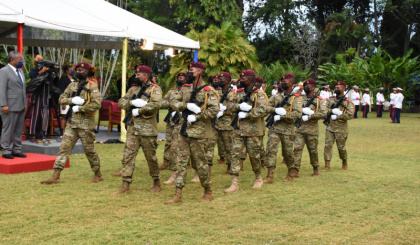 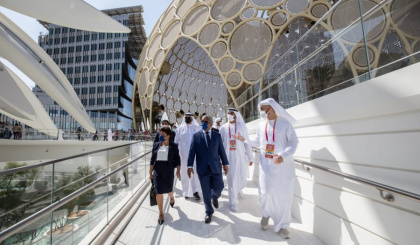 President Ramkalawan is given a guided tour of the UAE Pavilion 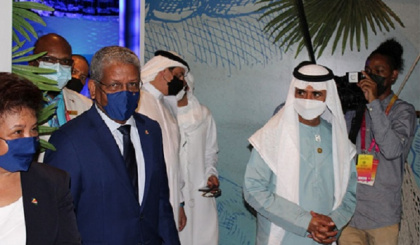