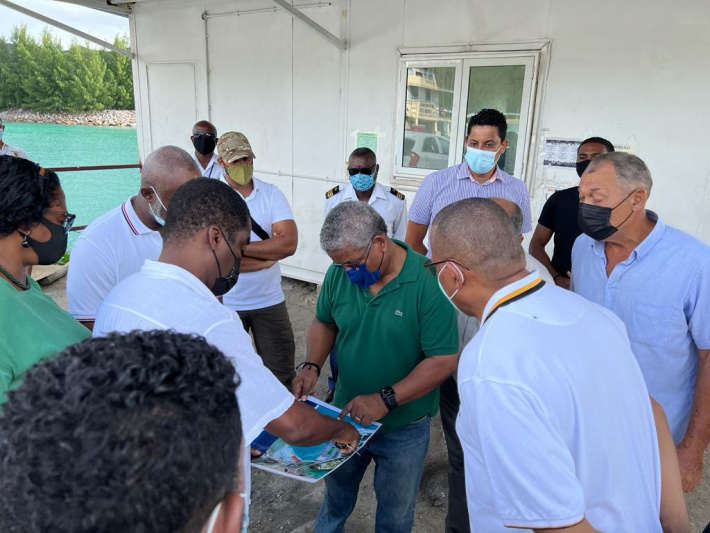 He was accompanied by Vice-President Ahmed Afif; the Minister for Transport, Antony Derjacques; the chairperson of the Seychelles Ports Authority (SPA), Gilbert Frichot and the chief executive of SPA, Ronny Brutus.

The aim of the visit was to discuss on site the cargo port facilities, projects that could be of benefit to operators and residents and to agree on the implementation of a public private partnership project. The project will be a collaboration between government and Praslin businessman and owner of MV Lespoir, Gerard Rose.

The new facility will allow for the creation of sufficient secure cargo storage facilities to be used by Praslin cargo boat operators and to also establish a proper container yard.

Following discussions, it has been agreed that the private operator will now submit plans for approval by government, following which the project will be expedited in order to be completed at the soonest.

Also present for the visit were members of the National Assembly for Praslin districts Baie St Anne and Grand Anse, Hon. Churchill Gill, Hon. Wavel Woodcock and Hon. Doyace Porice, as well as other district authorities including Praslin liaison officer Vincent Cedras and the district administrator for Baie St Anne.

All parties present were satisfied with negotiations and the new plan of action for the way forward.

The MNA for Baie St Anne, Hon. Gill, expressed satisfaction and his full support for the project as he believes this will be a step forward in the transportation of cargo between Praslin and other islands.

The MNA for Grand Anse Praslin, Hon. Woodcock, also expressed his support and felt that this will be beneficial for both the cargo operators and Praslinois in general, as there will now be greater safety and security for goods transported to Praslin.

On his part, President Ramkalawan expressed his appreciation to all parties involved for their collective collaborative efforts and said government looks forward for this project to become a reality as part of efforts of providing another essential infrastructure for the benefit of Praslin.

From Praslin, the delegation visited La Digue where the President was given a final explanation of the project in the port that is due to start soon.

He also met with police inspector Dufresne, the officer in charge of La Digue, where they discussed on how to ease the congestion on the port, bicycle hirers, the fight against drugs and law and order in general.

This was the first visit of the President to these two islands this year.

The accompanying photos show President Ramkalawan and his delegation during the visits on Praslin and La Digue. 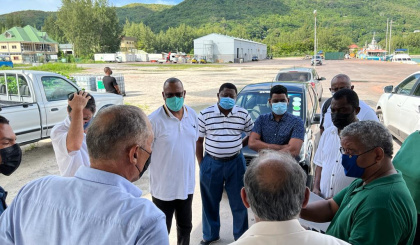 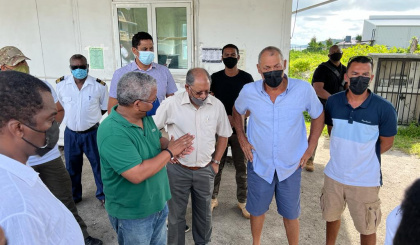