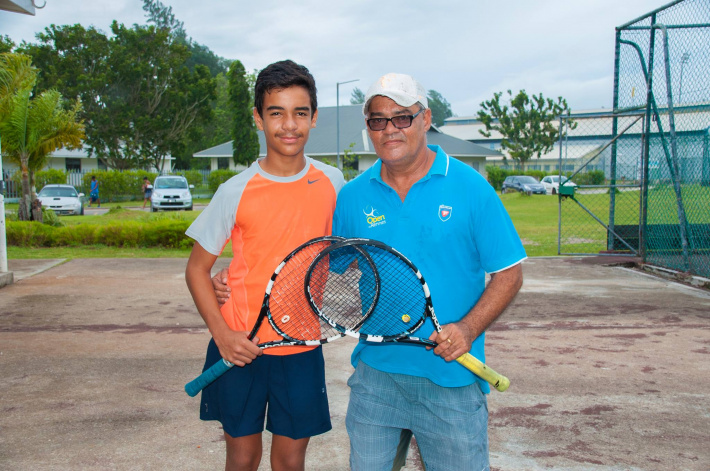 Mervyn with son Damien some years back

Seychelles has lost one of its greatest sportsmen and father to two of the country’s best athletes ‒ former basketball shooting guard Eddie Laporte and tennis number one player Damien Laporte.

Mervyn Laporte left this world on Thursday night after taking his last breath at around 7pm at his home at Mare Anglaise, Beau Vallon.

Mervyn followed in the footsteps of his father Pat Laporte to play football for Rovers in the early 1970s alongside players like Gonzague D’Offay and Tony Hoareau. According to reports, both father and son featured on the team sheets and lined up for matches against opponents like Ascot in those days. It was a rare feat in sports in Seychelles at that time and even nowadays.

It was under the leadership of Gerard Hoarau that Mervyn and teammates Lewis Betsy, Collin Whiting, Patrick Marguerite, Ralph Volcère, Terry Sandapin, Cyril Kilindo, Charles Alcindor, Basil Savy, Steven Biscornet and the rest upped their game to become the number one team in Seychelles.

With the regionalisation of sports in the early 1980s, Mervyn played football for his district side Beau Vallon. He had for teammates players like Fred Louis, Gerard Pierre, Steven Biscornet, Ralph ’Billing’ Micock, Claude Barbe, and others.

Then Mervyn left Seychelles for Canada, England and Saudi Arabia to work but he still played football occasionally and was on the verge of signing for a club there just before he decided to return to Seychelles in the mid-1990s.

His love for Rovers had not died as he immediately joined the team who had been brought back to life by Sandapin with the re-introduction of clubs here in 1993. That same year, Rovers took part in the Classification League and finished among the top-12 teams to earn a place in the first division league.

Mervyn also had a love for tennis as he served on the Seychelles Tennis Association executive committee and did some free coaching as well.

It was Mervyn who introduced his son Damien to tennis at the tender age of three, teaching him the game on the beach. Quite often, one could see the pair training on the beach at Beau Vallon and at the tennis courts at the Roche Caïman sports complex.

Mervyn and wife Marie-Josée Laporte, born Romain, travelled a lot with their child on tours and have been a great support for him all along.

His wish was to see his son go professional and that’s why he invested time and money into his training and travels for competitions. He admired Damien’s work ethics both on and off the court.

“I’m proud of what Damien has achieved. He has created history for Seychelles’ tennis with all his good results achieved through hard work,” Mervyn was once quoted as saying.

Damien, who has known successes both in the singles and doubles events at different age levels on the African continent, in Europe and South America, has always considered his father as his mentor and biggest fan.

As for Eddie he used to play basketball as a shooting guard for Beau Vallon and the Seychelles youth team.

Mervyn also introduced daughter Chloe Romain-Laporte to tennis at the age of five years old and she was once chosen as the best female player, but she did not persevere in the sport.

A very funny and loving guy, Mervyn was among the first to practice watersports activities in Beau Vallon and was a familiar figure in the northern district.

He was well-loved by many as he did a lot of pro bono tennis coaching and most of those whom he taught the game have taken to social media to thank him and his family for all that he has done for them.

Mervyn, who suffered a stroke four-and-a-half years ago and was diagnosed with cancer four months later, was always a fighter and he fought the good fight until he passed away on Thursday January 20, 2022 from cancer.

Sports NATION sends its condolences to his widow Marie-Josée, children and all members of his family. 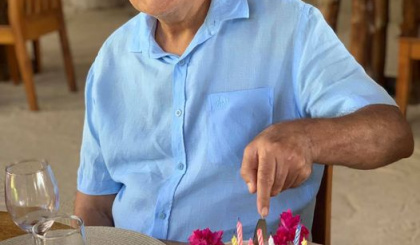