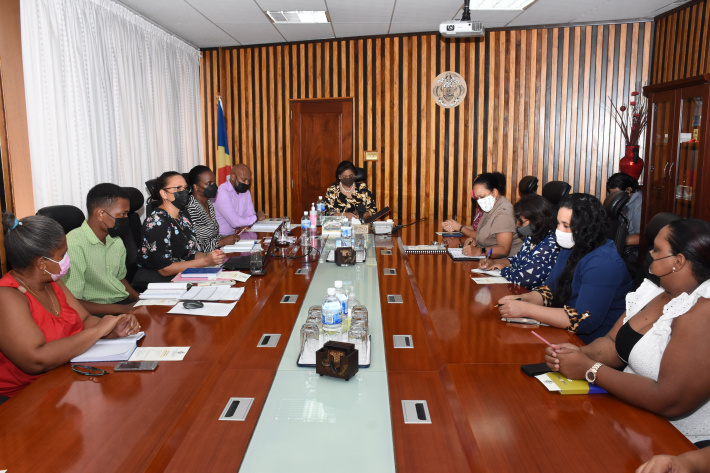 The meeting with the employment agencies (Photo: Louis Toussaint)

Local private employment agencies, the entities engaged in the recruitment and placement of workers for a fee which is charged directly to the employers, registered 1021 jobseekers and made 456 placements in 2021, while the number of registered vacancies was 1915.

The statistics were revealed on Friday during the first of a series of meetings between local agencies and the department of employment, headed by Minister for Employment and Social Affairs Patricia Francourt.

In Seychelles, the agencies are governed by two laws, precisely the Employment Act 1995 under the authority of the ministries responsible for employment and licences (Employment Agency) Regulations, 1995, administered by the Seychelles Licensing Authority (SLA).

Any person can open an employment agency as long as they meet the conditions of the two above-mentioned laws.

The process begins with employment department where a certificate is issued if everything is found to be in order, before the interested party can proceed to the SLA for a licence.

There are presently seven active agencies in the country, and they are engaged in registration of jobseekers, issuance of job cards, registration and publication of vacancies, job counselling and soft skills training, and also placement of jobseekers.

An employment agency shall also present in respect of each financial year a statement of accounts in such form and shall comply with the best commercial standard.

Friday’s meeting was an opportunity to reiterate on the expected procedures so that the two partners work systematically, with an outcome that benefit both.

Minister Francourt noted it is paramount that the employment department engages strongly and positively with all its prime partners, considering the local private employment agencies as one of them.

As future plans to better enfold the local agencies, Minister Francourt mentioned introduction of regulations for the agencies to better regulate their functions.

She said there will be more collaboration for re-skilling of jobseekers, and also a review of the Employment Act.

Ratification of the International Labour Organisation (ILO) convention on private employment agencies is also among the future plans of the department.

The purpose of the convention is to enable all private employment agencies to operate and to ensure the protection of workers using their services within the limits of its provisions. According to the convention, private employment agencies have to treat all employees equally without discrimination because of race, colour, sex, religion, political opinion, national exclusion or social origin.

All members should adopt all necessary and appropriate measures to prevent and to eliminate unethical practices by private employment agencies.

These measures may include laws or regulations which provide for penalties, including prohibition of private employment agencies engaging in unethical practices.