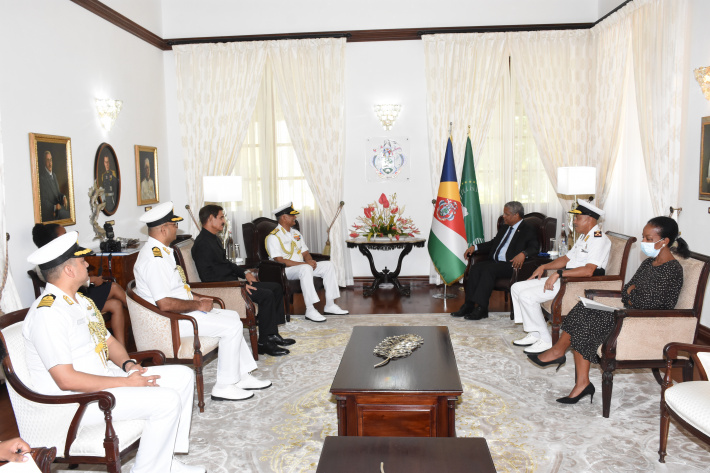 President Ramkalawan welcomed Admiral Hari R. Kumar, Chief of the Naval Staff of the Indian Navy and his delegation to State House yesterday

He was accompanied by the High Commissioner of India to Seychelles Gen. Dalbir Singh Suhag, and three other officers from the Indian Naval Forces as well as the chief of the Seychelles Defence Forces, Brigadier Michael Rosette.

After meeting with President Ramkalawan, Admiral Kumar said they talked about the good relations between the Seychelles and Indian armed forces and also about strengthening their cooperation in maritime security. He added that the two countries have been cooperating for years in the maritime field and that strengthening the ties further will increase the benefits for both countries as well as other countries in the region.

Admiral Kumar said the military cooperation between India and Seychelles has resulted in the latter acquiring  more patrol vessels for the Seychelles Coast Guard, two Dorniers for the Seychelles Air Wing and capacity building for more than 250 local army personnel. He further said that joint training exercises have allowed both armed forces to share knowledge and experience.

“Cooperation and exercises between our two armed forces have brought a lot of advantages. Most important is the building of trust and trust is something that comes forward after so many years. So this constant interaction has resulted in increasing trust between the two forces and that leads to trust between our two nations,” Admiral Kumar said.

Admiral Kumar remarked that working in the sea is difficult and challenging but more cooperation and further boost in maritime security will allow both countries as well as others to prosper.

Following his visit at State House, Admiral Kumar and his delegation were led on a tour of the Seychelles Coast Guard facilities by Brigadier Rosette.

Admiral Kumar who arrived in Seychelles on April 21, leaves the country today.