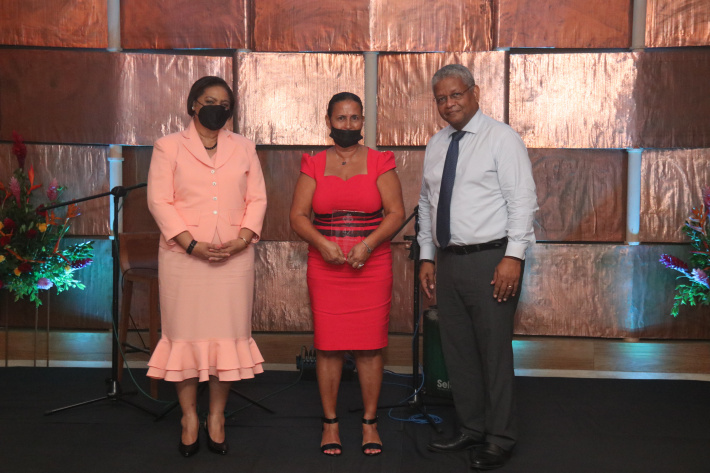 Dorothy Padayachy from the policy planning and research section is the longest serving staff of the employment department with 42 years of service and President Wavel Ramkalawan was the guest of honour during a ceremony on Friday to reward and recognise her achievements and that of her other colleagues.

Geralda Bastienne who has clocked 34 years, Maryvonne Francis 33 years and Lindy Desnousse 32 years are the other three employees with more than 30 years of service.

All the awardees were presented with their awards by President Ramkalawan and Minister for Employment and Social Affairs Patricia Francourt.

The ceremony held at the Ephelia Resort was part of the Ministry of Employment and Social Affairs’ activities for Labour Day and hosted under the them ‘Celebrate Workers’.

Also present at the event were the principal secretary for employment Jules Baker and other key officials from the ministry.

President Ramkalawan congratulated all the employees for their devotion, commitment to their work which have made them reach so many years of achievements which have in turn led to the milestone success of the employment department. He thanked them for making the effort to take opportunities that were offered to them and have helped them advance in life. He reminded them that it’s only by taking opportunities on offer that we will advance and further earn something in life.

President Ramkalawan also wished them a happy Labour Day and thanked them for guiding and placing the unemployed in jobs. He added that, through the ministry, he will continue to offer them his full support.

Speaking of the achievements and successes of the department earlier in her opening remarks, Minister Francourt commended the staff for succeeding to end 2021 with a little over 400 active job seekers on the database after the different stimulus programmes by government, such as the Unemployment Relief Schemes (URS), coming to an end and employers were not recruiting in view of economic uncertainty in the midst of Covid-19, which resulted in the department registering a record high 2,477 jobseekers.

She said new programmes came along to complement the traditional ones, such as the very successful ‘My First Job’ scheme that came in 2016 and whereby 3,000 graduates from the professional centres have benefited since then through government assistance with payment of a portion of their salaries as fully-fledged workers or young entrepreneurs or by simply facilitating their quick access to employment so that they can also start to contribute to the development of the country, and the localisation programme which has permitted 150  talented and capable young men and women among 400 odd identified to be trained and take key positions in their respective organisations where they are employed.

“Our strategic plan which will be reviewed this year has as one of its priorities to enhance staff welfare and performance. We plan to continue providing the necessary support to you as we believe these are essential in order to deliver a good level of service and it is also a way to show that we value the efforts being put in,” Minister Francourt said.

Addressing the long serving awardees, Minister Francourt said they deserve the special ceremony that bears proof of their devotion and passion towards the department.

“You are true examples for your colleagues who are surely learning from your wisdom and getting inspired to follow in your footsteps. Thank you for your tenacity and for putting Seychelles first,” said Minister Francourt who thanked the staff for their commitment and perseverance to move the department forward despite constraints.

During the ceremony, there were various testimonies from Nahed Bonne, Ibrahim Dodin, Tracy Mathiot and Joel Zialor, all participants on the various programmes of the department and from long serving staff Simone Malbrook as well as hotel manageress Doreen Valentin from Double Tree by Hilton Seychelles – Allamanda Resort & Spa which hosted some of the young workers on their journey and work experiences.

President Ramkalawan was also presented with a token of appreciation from the staff for supporting them. The guests were entertained by Isham Rath and his sister Isis Rath. The employment department employs 101 staff. 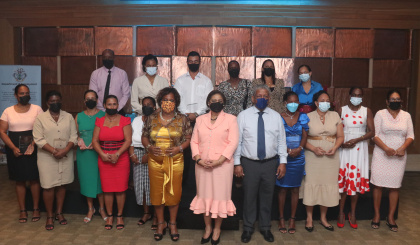