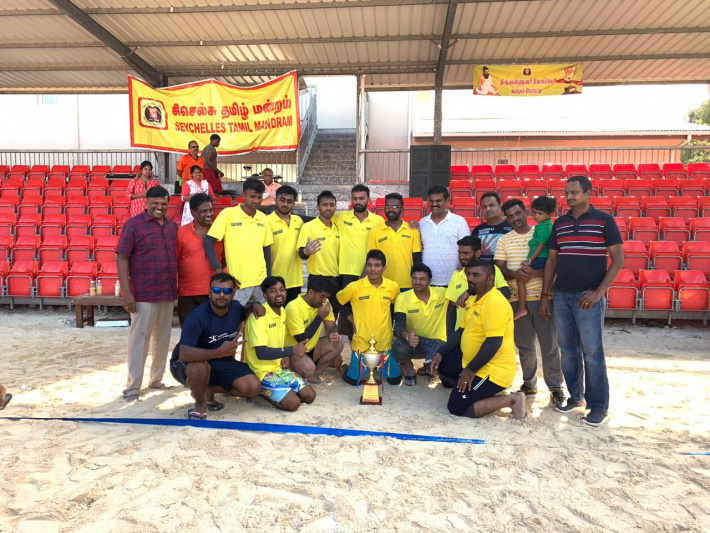 The second Thiruvalluvar Cup Kabaddi tournament was held on August 18 at the Cable & Wireless Arena beach at Roche Caïman. Players were seen participating with full effort and displaying absolute sportsmanship as there were plenty of supporters crowded at the stadium to grace the event.

The fixtures were drawn early morning at 7.30am and the tournament started at 8am with the welcome by the secretary of the Seychelles Tamil Mandram Association. The first match was played between the teams Mudinja pudi Mudiyaati po (means Catch if you can or let it go) and Murattu kalaigal (Raging Bulls) with the chairman Senthilkumar blowing the first whistles.

Kabaddi is a contact team sport, played between two teams of seven players. The objective of the game is for a single player on offence, referred to as a ‘raider’, to run into the opposing team's half of a court, tag out as many of their defenders as possible, and return to their own half of the court, all without being tackled by the defenders, and in a single breath. Points are scored for each player tagged by the raider, while the opposing team earns a point for stopping the raider. Players are taken out of the game if they are tagged or tackled, but are brought back in for each point scored by their team from a tag or tackle.

Seychelles Tamil Mandram secretary Deepak Radhakrishnan said that “Kabaddi is a sport originating from Tamilnadu and is the official sport of the state of Tamilnadu in India. It is our duty to celebrate our traditional sport. In order to glorify the ancient Tamil poet and philosopher ‘Thiruvalluvar’ who is believed to have lived 2,400 years ago and is best known for authoring the world famous couplets ‘The Thirukkural’, the tournament was named as ‘Thiruvalluvar Cup Kabaddi Tournament’ and the inaugural tournament commenced in August 2018 under the leadership of the chairman of the Seychelles Tamil Mandram M. Senthilkumar.”

Mr Deepak added that the response was fantastic as there was a huge turnout with 12 teams registering to take part in this year’s tournament while eight competed in last year’s. It is a positive vibe that people from different corners of Mahé including Barbarons, Beau Bel, Providence, Anse Etoile, Anse Aux Pins and Glacis took part in the tournament. Players were given snacks, water, juices to make sure they do not dehydrate and provisions were made to set up a food stall to sell food to players and spectators. In order to motivate the spectators and players a special tug-of-war was organised and all the people present took part with much enthusiasm.

The nail-biting final match was played around 4pm between the Mudinja pudi mudiyatti po and Shreeji Group, the former becoming the champions for the second time by beating the latter by a score of 34-31. It is also the second time Shreeji Group has finished as runners-up.

Siva Pillay made live commentary during the entire tournament and motivated the players with his jokes.

In his vote of thanks, secretary Deepak Radhakrishnan thanked all the players and spectators who took part in the event. He thanked the members and management of the Seychelles Football Federation for granting permission to use the stadium. He also thanked the umpires/referees, entire committee members and the sponsors for making this event a success.

The accompanying photos show the ambiance and competition during the Thiruvalluvar Cup Kabaddi tournament. 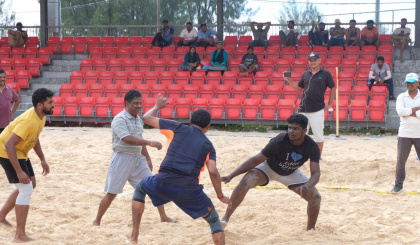 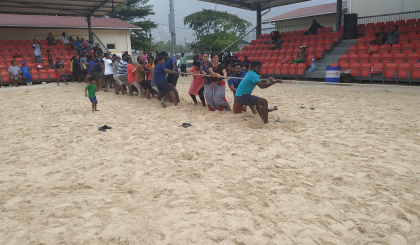 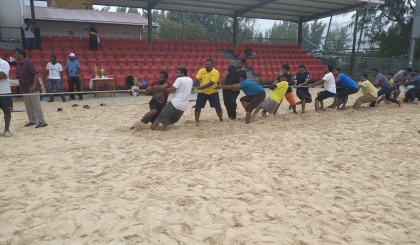