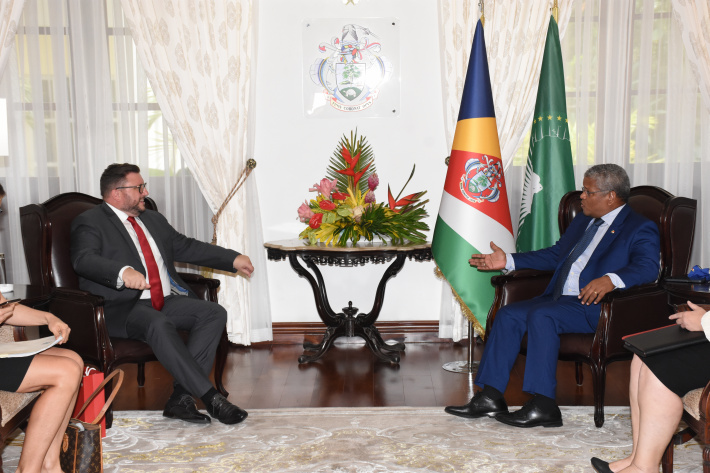 The ambassador of Switzerland to Seychelles, Chasper Sarrot, paid a courtesy call on President Wavel Ramkalawan yesterday at State House.

Ambassador Sarrot was accredited in February 2020 by former President Danny Faure, and this is his first visit to State House since President Ramkalawan took office.

Ambassador Sarrot is based in Antananarivo, Madagascar to which he is also ambassador as well as to the Comoros.

The ambassador said this is his second visit to Seychelles in light of the two years of the pandemic which made travelling very difficult.

He stated that the aim of this visit was “the first opportunity to meet the president” and “a good opportunity to review our bilateral relations to talk about the things that we share, that we have already in common”.

The discussion was in the fields of education, health and the challenges the country is facing.

He added that they also discussed how to move forward and deepen bilateral relations.

“We spoke about multilateral issues, so Switzerland is a candidate to become a non-permanent member of the UN Security Council. We spoke of the values that we share and also seeing the challenges in international politics these days,” he said.

Ambassador Sarrot described the relationship between Seychelles and Switzerland as very good and that “the ties that we have are much older than the date on which Seychelles gained its independence”. This year the two countries are celebrating 40 years of bilateral relations.