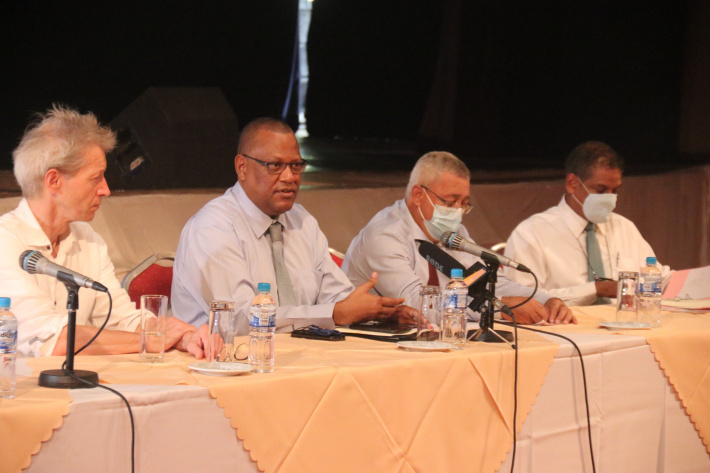 An 18-month trans-disciplinary case study for the transports system in Seychelles conducted by students from ETH Zurich Research University and students from the University of Seychelles, has found that passenger cars increased from 7000 to 23,000 between the years 2000 and 2020.

The study was aimed to address traffic congestion and create other connections to areas across Mahé in a sustainable and efficient manner.

The study’s focus was to oversee the transport systems status, the potential strategy to move to transportation efficiency, proposed sustainable alternatives to address the congestion issue.

During a short ceremony at the International Conference Centre yesterday morning, Dr Pius Krütli from ETH Zurich University who led the study presented the findings. This was in the presence of the Minister for Transport, Anthony Derjacques; Minister for Lands and Housing Billy Rangasamy; the principal secretary for transport, Patrick Andre; UniSey students and concerned stakeholders.

“When it comes to priorities, what we should improve is the comfort of the buses, punctuality needs to be improved, safety, the frequency of buses etc...” said Dr Krütli.

The research teams came up with a variety of solutions which include new road, tunnels, park and ride option, modernisation and expansion of public transport, active modes of transport, cable cars, flexible working hours and working from home as well as freight transport. One of the more opted solutions was having cable cars connecting Victoria to Beau Vallon.

The research also gave some insights into issues regarding transportation such as major congestion in Victoria while the source of congestion lies elsewhere. Other than adding to air and noise pollution the congestion also results in tremendous time loss comprising more than 2% of GDP (gross domestic product) of a city. Another insight which came out of the research is that any improvement on the transport system will have a stronger or weaker impact on sustainable land use.

Minister Billy Rangasamy stated that congestion has been an issue that has worsened significantly over the past few years.

“An appropriate decentralisation and decentralised parking, this is being discussed at cabinet level and that I can confirm almost on a weekly basis,” said Minister Rangasamy. He further added that this is key and central to their executive strategy.

The minister however acknowledged that what is highlighted in the study is that none of the individual solutions will be effective.

Following his presentation Dr Krütli officially handed over a copy of the trans-disciplinary case study to Minister Derjacques.

Minister Derjacques for his part noted that we all waste an hour or two in traffic but without proper and efficient transport systems, economies don’t grow.

He added that transport has always been the key to any economic development or civilisation but he recognised that losing more than 2% of the GDP per annum because of inefficiencies in the road transport system is significant and should be addressed.

Minister Derjacques stated that it was the transport system that revived the economy when Seychelles opened its borders and that 95% of our goods that comes through the port is via transportation.

Text and photos by Marla Simeon 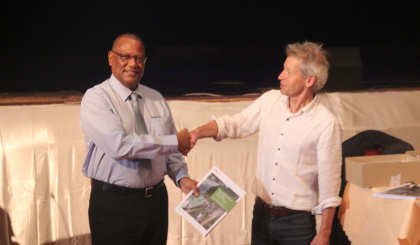 Minister Derjacques accepts a copy of the study from Dr Krütli