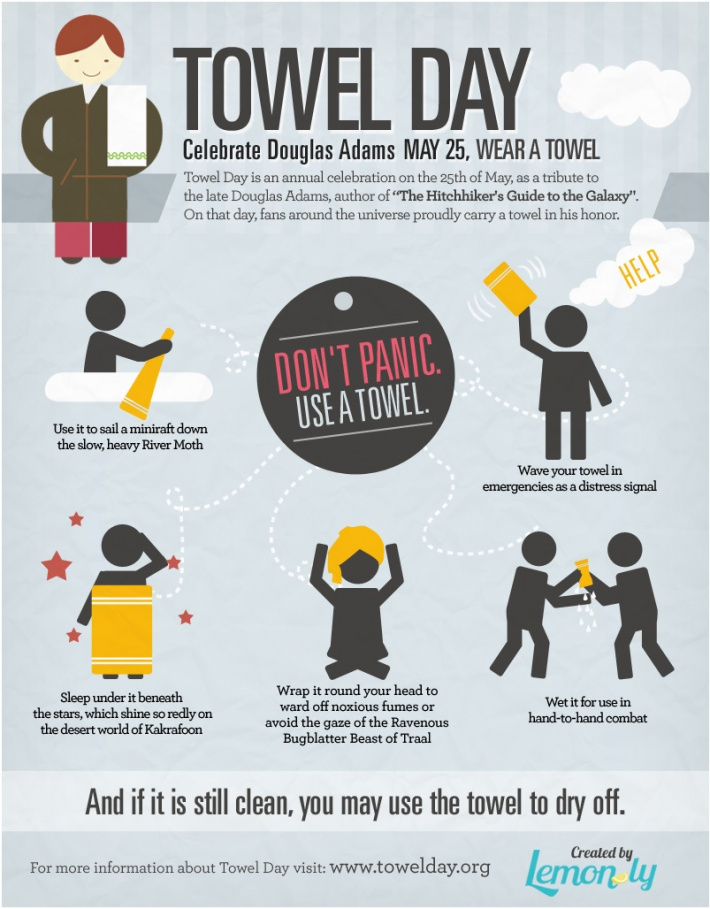 Did you know that today, May 25, we celebrate Towel Day? You must be wondering what this celebration is about.

So as a tribute to author Douglas Adams,all his fans will be carrying around a towel with them everywhere they go. As strange as it may sound, this gesture is to celebrate the late author and his well-known classic novel series ‘A Hitchhiker’s Guide to the Galaxy’.

In the first novel, it is said that the most important thing to carry with you on a trip around the universe is a towel.“A towel, it says, is about the most massively useful thing an interstellar hitchhiker can have. Partly it has great practical value — you can wrap it around you for warmth as you bound across the cold moons of Jaglan Beta; you can lie on it on the brilliant marble sanded beaches of Santraginus V, inhaling the heady sea vapours; you can sleep under it beneath the stars which shine so redly on the desert world of Kakrafoon…” he wrote.

Douglas Adams, who was born in the United Kingdom, died suddenly on May 11, 2001. Two weeks later, a group of his fans who had read his books decided to honour him by openly carrying a towel as a reference to their favorite novel series. This continued annually, where his fans joined the celebrations and also included more gestures such as sleeping under the stars on a towel or answering only to the names of the book’s characters.

The inspiration of writing such a world-recognised book came to Douglas one night as he was drunkenly gazing at the stars with a copy of ‘The Hitchhiker’s Guide to Europe’.

So if you spot a stranger carrying a towel around their neck today for no apparent reason‒take a photo with them and post it on social media with the #towelday to join the world in celebrating this author and his renowned novel. Don’t be alarmed if you hear someone shouting “Don’t panic!” or if your questions are answered with “42” and nothing else. These are just some of the ways Adams’ fans demonstrate their love of the book.

Have a read of this novel series if you’re interested in following the intriguing story it depicts and joining this reading community’s inside jokes!

If you want, you can send a photo of you wearing a towel or using one to nation@seychelles.net

Happy Towel Day you all!