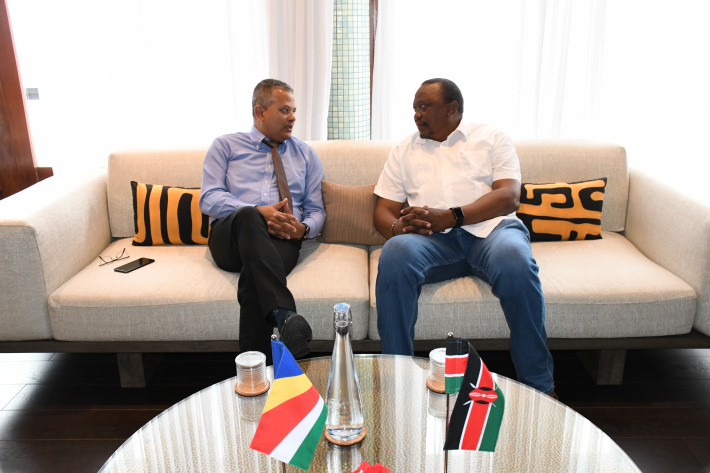 Hon. Pillay during his meeting with President Kenyatta at the Hilton Northolme Resort and Spa (Photo: Patrick Joubert)

The importance of African leaders coming together to protect the different constitutions of countries in Africa and the economic situations of African countries that are being affected as a result of Covid-19 and the ongoing war in Ukraine, were among topics of discussion between the President of Kenya, Uhuru Kenyatta, and the leader of the opposition in the National Assembly, Honourable Sebastien Pillay.

The meeting, which took place yesterday morning at the Hilton Northolme Resort and Spa, Glacis, was at the request of Hon. Pillay.

He noted that as per the constitution, it is imperatively important for the opposition to also get the chance to meet up with dignitaries visiting the country so that there is a better understanding of what is going on with regard to the relations between our country and the other countries.

He said that Kenya has always been a relevant country to ours taking into account the many Seychellois that have been born in Kenya (Kenya born) and the many Kenyans working in the country.

“So in that context it was important for me to organise the meeting with the Kenyan President. It is important to use partners on the African continent to help protect constitutions to ensure that multiparty democracy continues to evolve and remain dynamic and vibrant, and that there is no attempt to curtail free speech and freedom of expression,” Hon. Pillay said.

Hon. Pillay noted that as his party, the United Seychelles (US), is not in government, it was important for the opposition to have an idea of the direction the country is taking with regard to bilateral cooperation with Kenya and in line with that he also discussed with President Kenyatta the various proposed cooperation between Kenya and Seychelles.

He added that as for the role of a government in waiting, the opposition, like in every country, has to get to analyse if the decisions being taken by the government is or will be in the benefit of the country in the future.

“We look at the areas which we (US) feel, as the opposition, Kenya and Seychelles can also benefit from having a mutual partnership. We need to focus on what is best for our country and collectively see what resources can be brought to bear, in Africa perhaps, that can reduce the number of problems we have and the over reliance that we have on the West,” Hon. Pillay said.

He noted that the role of the National Assembly is to question government decisions.

“It is something that is normal and it happens in all democratic states and we are doing what we are doing according to the constitution. If we, as members of the National Assembly, do not question the government who will do it? Our support for the government will come only when they come clean before us on their decisions, plans and policies and that we also get the necessary information required for us to make informed decisions,” Hon. Pillay said.