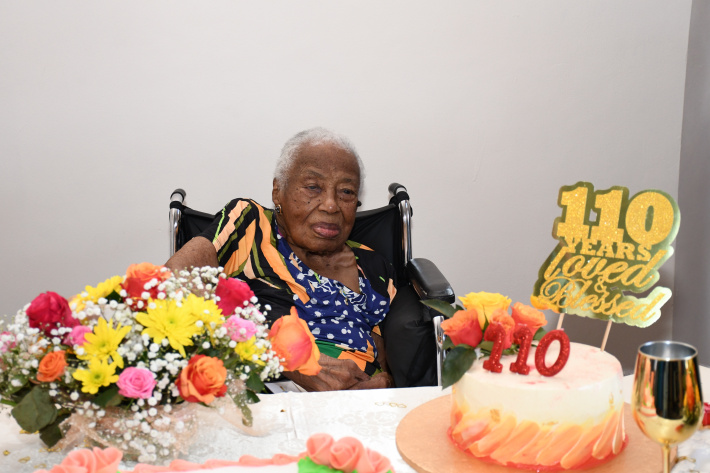 Yesterday’s mass was attended by her surviving children, several grandchildren, great grandchildren, other family members and friends among whom were President Wavel Ramkalawan and First Lady Linda Ramkakawan, and the St Louis district authority.

Her birthday coincided with the Feast of the Assumption of the Virgin Mary.

The mass was presided by Archbishop James Wong, and in his sermon, he thanked the good Lord for according Mrs Pouponneau 110 years of his blessing.

He added that in spite of all the difficulties of life, by the grace of God, she has been able to live a life of joy and success.

He asked God to continue to shower his blessing on her so that she will be able to enjoy more birthdays.

In his testimony on the life of Mrs Pouponneau on the part of the family, President Ramkalawan, who has known her and her family from a young age, said that she is still in good health with good eye sight, good memory and she can hear very well.

He added though that she still bears the same strong character as he had known her for all these years, a disciplined person.

He further added that she liked coming to church, when she was able, and that it was she who insisted on the hymns she wanted to be sung for her birthday.

He also thanked God for showering His blessings upon her for all these years.

Mrs Pouponneau, who participated in the singing of some of the hymns, was later asked how she felt on her birthday including on her health condition and she replied: “Let Jesus bless you all. God is power. My health, only this man (God) knows how I am.”

Mrs Pouponneau, nee Gill, was born on August 15, 1912 in the district of Anse Royale. She came from a family of seven of whom her four brothers and two sisters have since passed away. Her husband Wilby died in 1982. She had three daughters and a son and her eldest daughter has also passed away. She is now living with her daughter Daffodil, aged 82, who could not make it to the mass. She was a well known seamstress who could sew a wide range of attire – from school uniforms to wedding dresses.

Mrs Pouponneau was also presented with gifts from the President and First Lady and also from family members and friends.

A small reception was also held for her at the entrance of the church.

Her daughter Prisca, 75, who  came down from Italy for the occasion, said she was happy that her mother has reached that age and as her (Prisca) health is not in good condition, God willing she will come back to see her celebrate her 111th birthday next year, God willing.

Text and photos  by Patrick Joubert 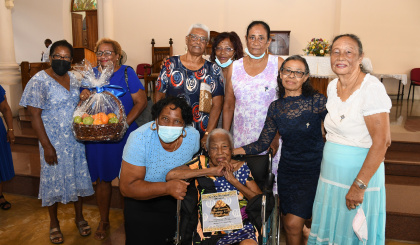 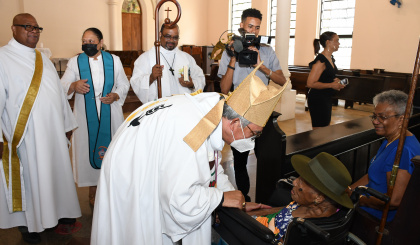 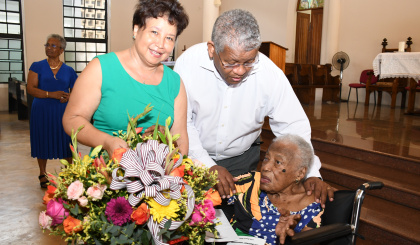