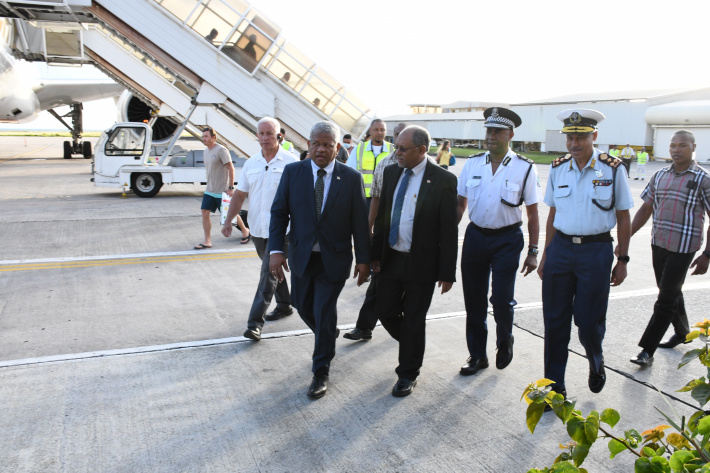 President Ramkalawan upon his return to Seychelles on Saturday morning (Photo: Joena Meme)

‘We are well respected for what we are doing’

President Wavel Ramkalawan has said that Seychelles is well respected internationally for what it is doing.

The president made the remark following his return from the 77th Session of the United Nations General Assembly (UNGA 77) held in New York.

He was speaking to members of the local press at the airport’s VIP lounge shortly after his arrival on Saturday morning. He was accompanied during the interview by Vice-President Ahmed Afif.

“All in all, the meetings were positive and the name of Seychelles came out very well. We are well respected for what we are doing,” President Ramkalawan said.

Before flying to New York for UNGA 77, President Ramkalawan was in the UK to attend the funeral of Her Majesty Queen Elizabeth 11.

The following are highlights of President Ramkalawan’s various engagements during the past two weeks.

“The main purpose of my travel was to attend the 77th Session of the UN General Assembly (UNGA 77) in New York City in the United States but I had to divert to the UK to attend the funeral of the late Her Majesty Queen Elizabeth II. I must say it was a very emotional moment and the funeral was attended by many world leaders of the Commonwealth and other leaders to convey their respect towards King Charles and pronounce our support to him as head of the Commonwealth. It was a very sad occasion and the Queen got the send-off that she deserved. We will continue to remember the wisdom with which the Queen led the UK and the Commonwealth in the last 70 years and we look forward to continue this relationship with the new king.”

President Ramkalawan had a meeting with the Alliance of Small Island States (Aosis) group where they discussed the Multi-dimensional Vulnerability Index (MVI) and a new concept which is called Loss and Damage.

“For Seychelles, our greenhouse gas emission is next to zero, but we are still being affected by the actions of industrialised nations. I am a member of the high-level committee set up by the UN and we will continue to pursue the MVI and the Loss and Damage for us to see how Seychelles can benefit from financing,” shared the President.

He also participated in another important meeting regarding climate financing and the investors are now keen to see how they can intervene.

“Seychelles is part of the Blue leaders where the main aim is for the States to protect at least 30 percent of the oceans that fall under their care by the year 2030. Seychelles has already reached the target and we are now at 32 percent. Seychelles was again acclaimed as a leader.

When it comes to the Loss and Damage concept, the alliance is seeking to look at how industrialised countries will make contributions toward vulnerable island states as compensation for the damages caused as a result of industrialisation.

Meeting with the GM of Emirates Airline

Seizing the opportunity of being in transit in Dubai, President Ramkalawan had a meeting with the general manager of Emirates Airline, Sheikh Majid Al Mualla, where they talked about the construction of the new Seychelles airport as well as how Seychelles can be used as a hub for Emirates Airline when operating within the region. This of course will be beneficial to the country, noted the President.

40 housing units funded by the UAE

President Ramkalawan shared that in a bilateral meeting with the UAE Minister of State in the Ministry of Foreign Affairs, Sheikh Shakhboot Nahyan Al Nahyan, it was decided that the UAE will be funding the second phase of the Orchid Housing project at Barbarons which consists of 40 units.

“The third phase is on the table, and soon the Seychelles government will provide further details,” President Ramkalawan said.

Among the various news shared by President Ramkalawan was the possibility of a visit from Prince Albert of Monaco together with Sylvia Earle – renowned American marine biologist – to the Aldabra atoll in the coming weeks to see how they can promote Aldabra but also see how they can help in climate mitigation and adaptation.

He reiterated the importance that the Seychellois community abroad can play in the development of Seychelles. In that line, he urged the Seychelles diaspora in New York to follow all developments happening in the country and to make their contribution for the benefit of the country.

Although a fairly small group, the meeting with the head of state was an opportunity for the Seychellois present to discuss how it is for them as members of Seychelles diaspora in New York, share their challenges as well as share ideas as to how they can assist in the development of their homeland. Also present was the permanent representative of the Republic of Seychelles mission to the United Nations, Ambassador Ian Madeleine, senior career diplomat, Ambassador Claude Morel and second secretary from the department of Foreign Affairs, Marion Etienne.

Participation of the First Lady in UNGA 77

Many people have questioned the participation of the First Lady, Linda Ramkalawan, in the UNGA 77. To this comment, President Ramkalawan stated that he understands why people were questioning this as for a long time, Seychelles did not have a First Lady.

“A First Lady has an important role and many First Ladies were attending the meeting. People need to understand that when these summits are organised, the invitation also goes to the First Ladies and they have a special programme. Seychellois should be proud that they have a First Lady to represent them on the international level.”

“I believe that Seychelles is on the right track and we are doing our best to see how we can help promote the country and how through partnerships, the people of Seychelles can expect greater investment in the country, and this will mean better prosperity for our nation,” concluded President Ramkalawan. 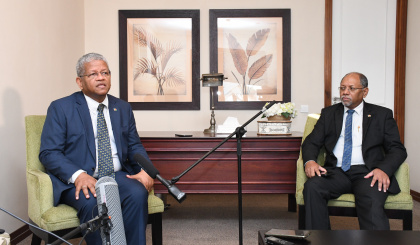 President Ramkalawan, accompanied by Vice-President Afif, during the interview with the local press at the airport (Photo: Joena Meme) 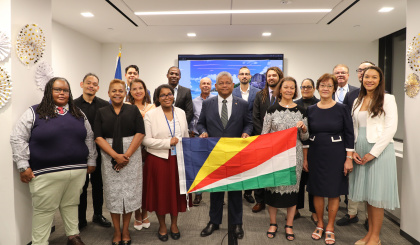 With members of the Seychellois community in New York (Photo credit: State House) 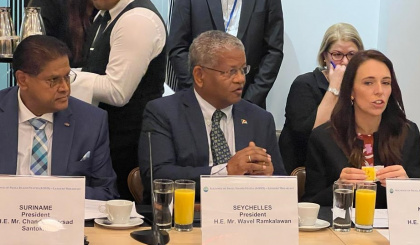 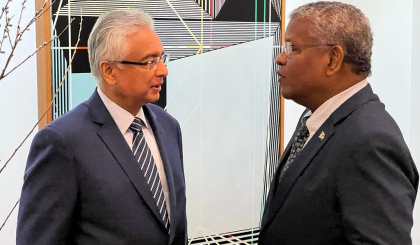 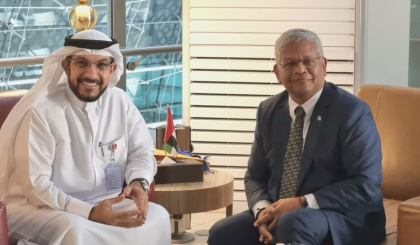 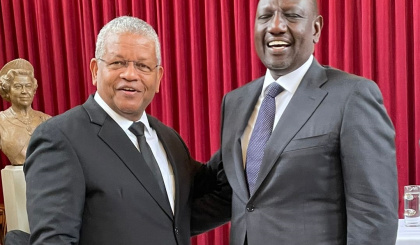