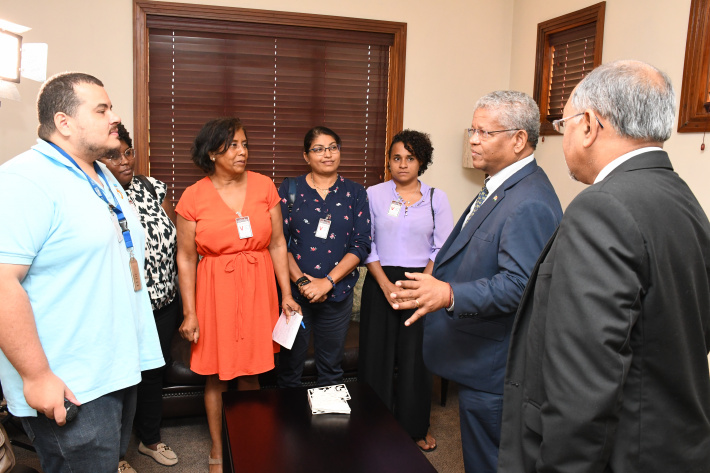 Following his return from the 77th Session of the United Nations General Assembly held in New York, the press seized the opportunity to ask President Wavel Ramkalawan his reaction on several national events which have been in the limelight lately.

About the joint petition lodged by the Seychelles Human Rights Commission, the Ombudsman and the Bar Association of Seychelles with the Constitutional Court on Tuesday, September 13, 2022 for a review of the constitutionality of article 3 of the Constitution of the Republic of Seychelles (Tenth Amendment) Act, 2022, which empowers the Defense Forces to carry out internal law enforcement in Seychelles outside the context of a public emergency: “I am content to see that now organisations feel free to challenge an amendment, bring a case to court. There were amendments before such as to allow Coast guards to arrest people at sea. Coast guards are soldiers under the Seychelles Defense Forces and they are already doing the work of the police even before we made the 10th amendment. If the Constitutional Court finds that the amendment is not constitutional, it will be removed and the process will continue.”

On the recent drug raid at ex-Kan Gard housing estate, Mont Fleuri, President Ramkalawan said “it is unfortunate, in my opinion, how this event was interpreted. I think the media went on the sensational side and suddenly we all believe that Kan Gard was a quiet and calm village! We have to be balanced and according to reports the police and the military did their work in accordance with the law. The child that was affected was brought to the hospital and they waited until the child received treatment. A man was arrested and after verification he was released. It was mainly the children who were throwing stones. These operations are being done with all respect to the law and there has been no human rights violation.”

On the fight against drugs, the head of state confirmed his mission to put an end to this. “We have seized assets worth R350,000 and at the moment we are on the alert to make further arrests.”

On the recent accidents mainly involving scooter drivers, President Ramkalawan noted that he is sad to see young people losing their lives as a result of these accidents. “All these affect me and we have to relook at the learner’s license and see if we need to have a school for the scooter drivers. Many of us face this situation everyday where the scooter drivers can cause an accident. We really have to be serious with this situation.”

On the recent cases of suspension of high ranking officers in the government, President Ramkalawan noted that he has always made it clear that whenever there is a complaint or an incident there should be an investigation. “Once again I am happy that now we are able to hear such things which shows there is transparency. I always maintain this – whenever there is a report against one person, the person is innocent until proven guilty. There is an ongoing investigation and as a government we have the responsibility of not hiding anything and take necessary actions when needed as we are fighting against corruption and abuse at work.”