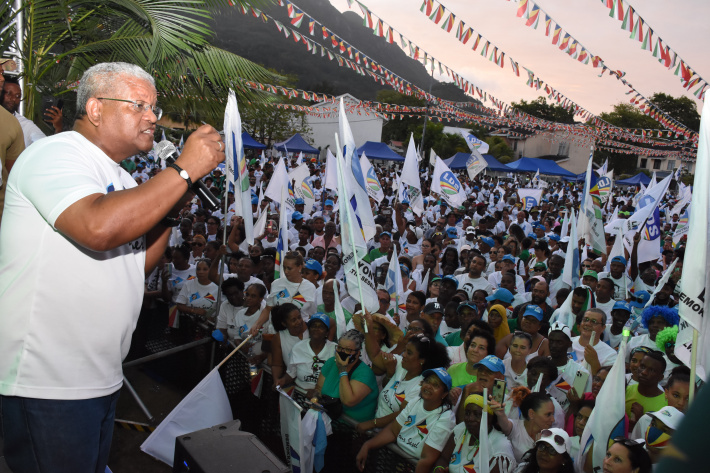 Activists, leaders, supporters and followers of Linyon Demokratik Seselwa (LDS) including those from Praslin and La Digue joined together during three days of celebration over the weekend under the theme ‘Annan tou rezon pour selebre’ – (All the reasons to celebrate).

The activities started in the districts on Friday, followed by a motorcade on Saturday and ended with a public meeting yesterday at Roche Caïman where the President of the Republic, Wavel Ramkalawan, made a public address.

Linyon Demokratik Seselwa (LDS) described the three days of activities as their first celebration meeting since their victory in the 2020 general elections.

President Ramkalawan said: “I dedicated my time to do what is best for all Seychellois. I do not ask for whom you voted. Many do not understand why we take certain decisions now, but they will see the results later. At international level, the ratings of Seychelles keep doing well, whereas that for other countries is crumbling. Our team is working hard but we keep having to overcome barriers on our way. I am enraged when I see that Seychellois are still not getting answers to their queries. I would like to address all public servants who are not working for all Seychellois to leave your job if you are not ready to work for all Seychellois. In our government, no one is victimised! We are just asking for everyone to do their job as best as they can. Let us all talk and act in a way to make the country move forward.”

President Ramkalawan also confirmed that as from next year, there will be an increase in salary and this will be more than R500, and that his administration will also revise the stipends of university students here and abroad.

“As a government, we have to plan ahead and make savings and then give back to the community,” he added.

President Ramkalawan has also called on his supporters to get ready to reorganise themselves as they start working for the 2025 elections.

“We have to come together as a team and go back in our districts and work hard. We want the best for Seychelles and the only way to achieve that is to keep working hard.”

Party leader Roger Mancienne thanked all the supporters for trusting in the party’s ideology and emphasised on the need to keep working hard for the betterment of Seychelles.

“We want everybody to be proud to be a Seychellois and to keep working for a unified Seychelles. The President has not divorced himself from the party and he is fully engaged with LDS,” noted Mr Mancienne.

As for Vice-President Ahmed Afif, he also reminded the supporters that “there are many reasons to celebrate” and noted that they are “under a good leadership and all decisions taken by President Ramkalawan are for the benefit of Seychelles”.

He also spoke about the work done by Minister for Finance, National Planning and Trade, Naadir Hassan, to help maintain our foreign exchange at a stable rate and the bold decisions taken to boost up the economy.

Designated Minister Jean-François Ferrari spoke about the responsibility entrusted on him to groom the new ministers and declared that two years into the five-year mandate the cabinet of ministers is the best team with the focus on the country.

When addressing the crowd, party secretary general Gervais Henrie also called on the supporters and members of the National Assembly to keep working for all and to address all issues to the best of their ability.

“Members of the public should feel free to contact the elected members and bring forth their issues. As a party we are happy to see that there are more people in employment and are not depending on the state,” said Mr Henrie.

Other speakers were Wavel Woodcock and Desheila Bastienne.

There were also live performances by different artists.

The accompanying photos show some highlights of the celebrations. 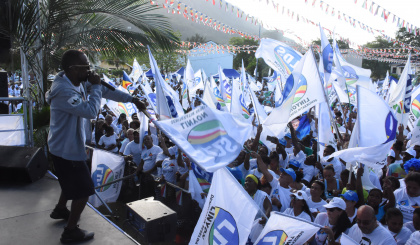 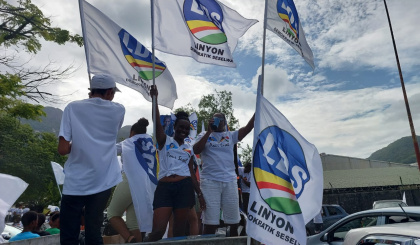 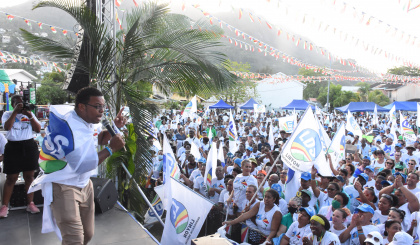 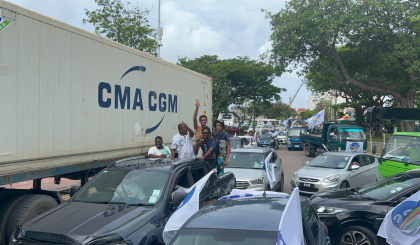