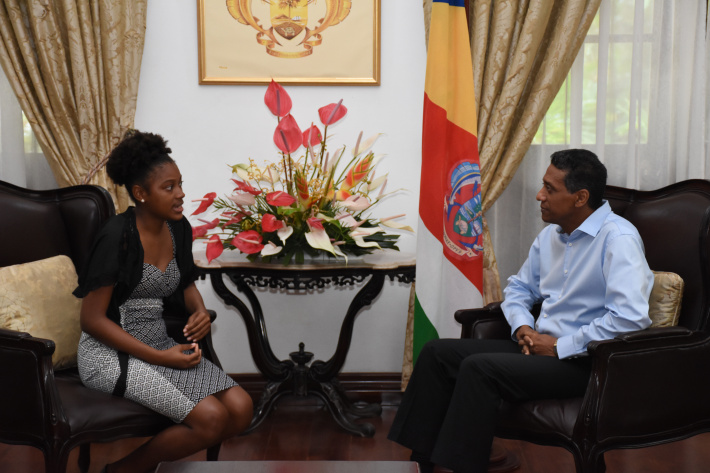 Kelsy Gill, an 18-year-old Seychellois who recently returned from a two-week expedition to explore the eastern Canadian Arctic and Western Greenland, was yesterday received at State House by President Danny Faure.

The first-year University of Seychelles (UniSey) environmental science student had the opportunity to share her experience from the July expedition with the president.

An active member of the SIDS Youth Aims Hub (SYAH) Seychelles, Kelsy, a staunch environment activist who is greatly concerned by the impacts of climate change, joined 130 high school and university students from around the world who have the same avid interest on the two-week ‘Students on Ice’ 2019 Arctic Expedition.

Speaking to the press after meeting President Faure, Kelsy expressed her joy and appreciation for the honour to be received personally by the president to discuss issues that she says are close to her heart.

“I feel really honoured and privileged to be received by the head of State, it is something that really touched my heart and it made me really happy and proud to share my experience with him and he was so attentive,” Kelsy said of her meeting with President Faure.

She said the president also wanted to know about her studies and her plans for the future and gave her some advice on life.

“Life is like a ladder, climb it one step at a time, don’t run,” he advised.

Kelsy said the president informed her that soon he will be taking part in the climate summit in New York, United States of America and he asked her what message she wants him to bring there.

“In order to effectively tackle the problems of climate I want to see more collective actions and everyone should seriously play their part,” Kelsy told the president.

Kelsy’s invitation in the ‘Student on Ice’ 2019 Arctic Expedition came after she took part in a competition to write a letter to the United Nations secretary general expressing concerns about climate change.

She said President Faure has shown a very keen interest to know the content of her letter and wants a copy to read at the summit.

A communiqué from State House wrote that President Faure commended and congratulated Kelsy on the remarkable achievement and expressed his hope that she becomes a role model for other young people, inspiring them to engage with environment activism and studies.

“I want to congratulate you for such an incredible accomplishment through your own initiative. I have been touched by what you are doing and it means a lot, in view that Seychelles is a global champion for environmental conservation, and now the blue economy agenda as well as ocean governance,” said President Faure.

Meanwhile, Kelsy has expressed her heartfelt gratitude to her family and everyone who support and encourage her in all her effort to contribute her part in raising awareness on climate change and environment protection.