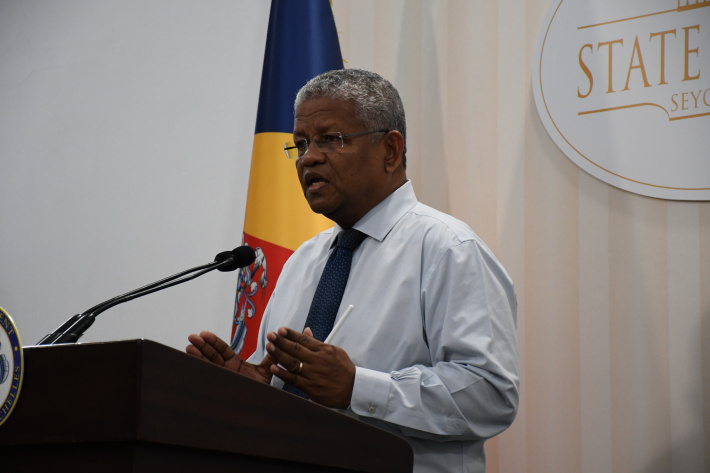 The redundancy of deputy commissioner of police, Ron Bonnelame announced on Monday this week, is part of the police reform in line with their strategic plan, President Wavel Ramkalawan has said.

He said this during his fourth and last press conference for the year yesterday evening at State House, where a new format was introduced, with the entire session lasting shorter than previous press conferences, and one question per journalist in the first round.

In order to reduce the length of the session, State House has also removed the introductory remark by the Head of State, allowing journalists to dive straight into question time, which also allowed a shorter second round.

President Ramkalawan explained that the redundancy of deputy commissioner of police Ron Bonnelame announced on Monday this week, was part of the police reform in line with their strategic plan. He said the plan, prepared with the help of British consultants, outlines the reforms that will take place within the police force leadership, starting with the first one, which was DCP Bonnelame’s redundancy.

He explained that the proposal by the consultants was to have one deputy commissioner of police instead of two, and to use the funds to finance the appointment of several assistant commissioners of police.

Mr Ramkalawan was answering a question related to the announcement as well as the recent presentation of the police budget to the National Assembly, which had catered for two DCP posts.

The Head of State said his government remains alert on the sale of land to foreigners, especially those who have used their status of naturalised citizens in the past to purchase large plots of lands.

"I am waiting for the biometric passport to be fully in place so that we can carry out a comprehensive exercise to see who have been issued Seychelles citizenship and have used their status to buy large plots of land. The immigration department has already been advised to be on the alert, to allow us to take back control of our nationality,” said Mr Ramkalawan.

He said since coming into office his government has imposed a moratorium on the sale of residential plots of land to foreigners and this will be maintained.

President Ramkalawan said the government was also on the alert to chase foreigners who are using Seychellois to purchase land on their behalf.

“There is no conflict between the media and government,” said Mr Ramkalawan, stating the two sides, through the Association of Media Practitioners (AMPS) recently had a “fantastic meeting” where various issues of concerns were tabled.

“I hope that in the spirit of freedom of expression, both sides understand they can be criticised,” he said.

Mr Ramkalawan added that all sides in the country should understand the meaning of freedom of expression and how all parties should express themselves.

“Does it mean that if I do not like something you have done I will insult you, or I write what I like, defame others and their families? Doesn’t journalism bring with it certain responsibility?” queried the president.

He added that freedom of expression was relatively new in the country and all sides are trying to find their footing, adapt and understand their role.

While investigations are ongoing, it is the norm that information of a certain nature cannot be divulged to the media, President Ramkalawan asserted.

The president, however, encouraged investigative journalism, and the media’s role as the fourth estate where the media plays an active role in ensuring transparency, accountability and good governance.

“We need to strike this balance,” President Ramkalawan said.

“I consider The Independent as another form of Facebook,” President Ramkalawan said of The Independent newspaper, who were not invited to last night’s presidential press conference.

He accused the paper of defamation and making false accusations among others, hence the decision to “not entertain such behaviour” at State House, towards, as discussed with the Association of Media Practitioners (AMPS), a media landscape characterised by serious, responsible and credible media houses.

President Ramkalawan acknowledged that persons living with disabilities often face discrimination and different forms of abuse, even within the family structure.

Access to specialist medical care to residents of Praslin

Even with the construction of the new hospital on La Digue, residents of the island will still not be able to access specialist care or services such as an intensive care unit (ICU), due to the limitations of the medical system.

“To this day, even on Mahé, we still have certain challenges in our health system. We are in the process of procuring magnetic resonance imaging (MRI) equipment which costs R50 million, and we cannot afford to have another one for Praslin at the cost of R50 million,” the president noted.

Ensuring that Praslinois have access to specialists remains a priority, and government is looking into making available facilities for patients undergoing treatment and their caretakers.

Improving the quality of healthcare remains a priority, he added.

The plan to convert the old Anse Royale health centre into a specialist treatment facility is still on the table, President Ramkalawan assured, although finer details will be announced later.

With the project being financed through a donation, the process is therefore longer than usual.

Traffic congestion in the southern region

In a bid to relieve the daily traffic congestion from the Seychelles International Airport, Pointe Larue, heading towards the southern region of Mahé, a third lane is planned, and government is currently negotiating way-leave with property owners.

The Seychelles Land Transport Agency (SLTA) is also working on a plan to extend the road running by the National Assembly into a dual carriageway, to relieve congestion from the northern region as well.

Government is also exploring the possibility of multi-storey car parks with shuttle buses to transport people to town and back.

The president has said he will discuss the possibility of Seychellois citizens travelling to the United States of America without a visa, now that the country has recently issued biometric passport. He said he will raise the issue at his upcoming meeting of the US-Africa leaders’ summit next week.

Government is presently finalising through the Vice-President’s office the acquisition of GPS bracelets equipped with a satellite link to be able to locate visitors who are going on hikes while in Seychelles.

This follows numerous incidents of visitors going missing while hiking along the various trails.

In addition, government will soon be acquiring a thermal camera for drones, to facilitate the search and rescue missions at night. Thermal cameras are able to detect body heat and enable law enforcement to see in darkness.

“It is real and costs us a lot, and this concerns us as government. To launch a rescue operation throughout the night, the day, to involve the coast guards and hiring helicopters in some instances costs us a lot,” he remarked.

Elections for Office of the Mayor

The Bill making provision for elections for the Office of the Mayor was published earlier this year.

However, both major political parties in the National Assembly are making propositions and are engaged in a dialogue regarding the merit of the Bill, or whether elections for the position of Mayor should be held at the same time as the next Presidential elections in 2025. 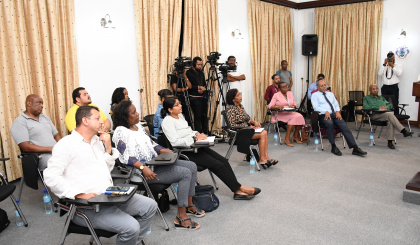 President satisfied with ongoing projects on Praslin and La Digue |27.01.2023