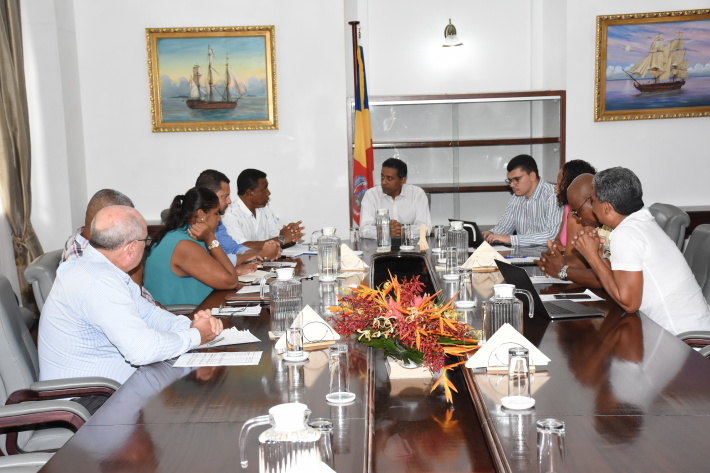 The aim of the meeting was for the association to present its members to President Faure and also to discuss with him the challenges and difficulties the business community on La Digue is facing with regard to the ease of doing business.

Speaking to the press after the two-hour meeting, the chairman of the association, Melton Ernesta, said the meeting was fruitful and that President Faure has expressed his commitment to put forward their concerns for discussion at cabinet level.

Refraining from revealing the details of the discussions until the outcome of the cabinet meeting, Mr Ernesta nevertheless said that their main area of discussions were on the cost of construction materials and other goods on La Digue which are impacting on the cost of running a business while also affecting other La Digue residents.

Mr Ernesta, who was leading the eight-member delegation at State House, said that the association is looking towards having a tax reduction which could alleviate the high operating cost of doing business.

He noted that the electricity interruptions during the feast of the Assumption which had caused loss of revenue to businesses and the La Digue community at large, was also a topic of discussion with President Faure among other issues.

The La Digue Business Association was formed in May 2019 and has ten executive members. Apart from Mr Ernesta, other members present at the meeting at State House were Robert Pool (vice-chairperson), Ruby Rose (secretary), Elna Waye-Hive (treasurer) and Elias Radegonde, Perin Pierre, Allen Niole and José St Ange as ordinary members. Daniel Socrate and Amstrong Jean were not present.

Also present during the discussion was the economic advisor in the President’s Office, Bertrand Belle.