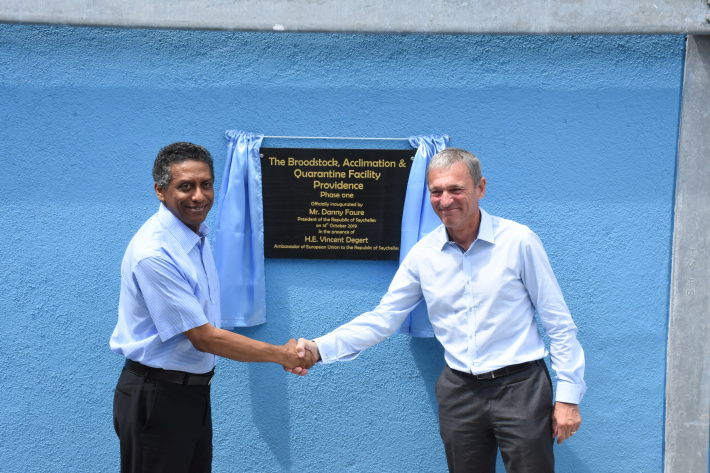 The development of an aquaculture sector in Seychelles has received a big boost with the opening of a new Broodstock Acclimation and Quarantine Facility (BAQF).

Located at Providence Fishing Port, the new facility was officially inaugurated yesterday by President Danny Faure and the Ambassador of the European Union (EU) to the Republic of Seychelles, Vincent Degert.

The event was also attended by Vice-President Vincent Meriton; the Designated Minister Macsuzy Mondon; the Minister for Fisheries and Agriculture, Charles Bastienne; the President of the Court of Appeal Francis MacGregor; and members of the diplomatic corps.

It is indeed an exciting journey towards the development of our aquaculture sector in Seychelles. The Broodstock facility, funded by the EU, is a testimony of the continuous partnership between Seychelles and the EU. The total cost of the project has amounted to R15 million.

The decision to have such a facility was taken by cabinet in February 2017 to proceed with developing an aquaculture sector which is aligned to the Ecosystem Approach to Aquaculture, which is a United Nations FAO guideline to ensure that aquaculture promotes sustainable development, equity, and resilience of interlinked socio-ecological systems.

In his opening speech, Minister Bastienne noted that “the government’s ultimate goals in developing an aquaculture sector through the Aquaculture Policy include economic diversification, food security, and sustainable management of the marine environment and creation of jobs, notably high value ones. As the newly launched Fisheries Comprehensive Plan has shown, infrastructure projects are key to establishing sound foundation to the re-vamping of the fisheries industry”.

How will this Broodstock Acclimation and Quarantine Facility operate? “This broodstock facility will home some of our flagship fish species such as Grouper (vyey), Red snapper (bourzwa) and others. They will be the parent fish for future generations of fish to be grown in our new aquaculture sector. From here, these broodstock will be relocated to an aquaculture research and development facility, where these fish will spawn, and the eggs will be grown out in a specialised hatchery which is planned for Phase 2 of this facility right where we stand.”

Minister Bastienne explained that various trial projects have started including finfish in cages, mudcrabs in pens and sea urchins in flow-through systems. It will take time to produce commercial volumes and this must be done cautiously.

“We now have a very solid Mari-culture Master Plan, Environment and Social Impact Assessment and an Environmental Management Plan to work with. Our regulatory framework is almost completed and soon we will be able to proceed with commercial projects,” explained Minister Bastienne.

Further to that, the deputy chief executive of the Seychelles Fishing Authority (SFA), Calvin Gerry, added that the broodstock facility is a 24/7 operation and will require a lot of attention as the aim is to always keep the fish alive and well.

“The facility boasts an impressive pumping and filtration system which is able to filter down to very fine materials such as bacteria to ensure that the fish are in the right environment and stay alive. Recently a set of two sea cages have been installed just off the coast of the Providence Fishing Port. These sea cages will be used as grow-out enclosures for juvenile fish that are produced from the broodstock until the desired market sizes,” said Mr Gerry.

A dedicated team of young Seychellois supervisors and technicians, most of whom are graduates from the Seychelles Maritime Academy, have been mentored and trained to run this facility

What will the next phase 2 comprise of? “The next phase of the broodstock facility will comprise a multi-storey building which will house a hatchery on the ground floor, two laboratories and several aquaculture administrative offices on the upper floors.

It demands specialised training and research which now can be conducted through our partners such as Seychelles Maritime Academy and UniSey to name a few.

The EU ambassador said that “Aquaculture is a sub sector of the blue economy and I know how this topic is high on the agenda of President Faure. Shall I have to recall that you have been recognised by the African heads of State as a champion of the blue economy in 2018. We all know that Seychelles has a natural capital that must be protected under the strictest possible laws and regulations. This is the reason why aquaculture in Seychelles has been designed in due respect with the highest standards in hygiene, health control and sanitation to prevent any disease and limit to zero waste the aquaculture centre”.

Mr Degert recalled that the BAQF has been funded through the current Sustainable Fisheries Partnership Agreement signed between the Republic of Seychelles and the European Union in 2014.

“Let me use the opportunity to remind that the Fisheries Agreements between Seychelles and the EU have existed for thirty five years as the signature of the first tuna agreement was in 1984. Since then, twelve agreements in the field of fisheries have been signed as the current one comes to an end in January 2020. And I am confident that very soon, we will be able to sign a new one, hence reflecting our long-standing and solid partnership in the fisheries sector. As European Union, we proudly consider that these tuna agreements have contributed to the economic growth of Seychelles. And will continue in the future to do so.”

Talking to the press, Aubrey Lesperance, the principal aquaculture officer, also explained the different components of this facility and the future plans that will involve the private sector.

Asked about a future shrimp/prawn farm, he said: “With regards to shrimp/prawns, we have been doing surveys since the beginning of the master plan in 2008, and the only island that we can do prawn farming is Coetivy. The reason for this is for you to have a prawn farm, you need to do it in large ponds. The island where this type of activity had been feasible in the past is Coetivy. But obviously this has to be in line with the island’s development plans. We are also in contact with the Islands Development Company (IDC) to see what can be done.”

The unveiling of the commemorative plaque to mark the opening of the new facility was done by President Faure and Ambassador Degert.

After the blessing of the facility by Father Colin Underwood, Minister Bastienne joined the President and the EU ambassador to officially inaugurate the building. All the guests present were able to visit the new facility under strict hygienic control. 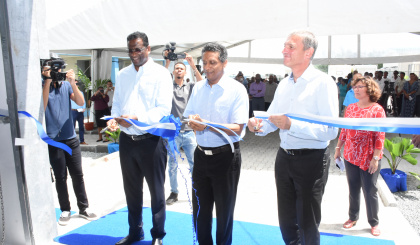 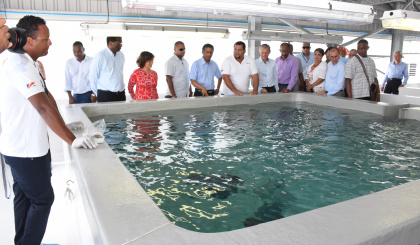 Guests viewing a fish pond at the new facility