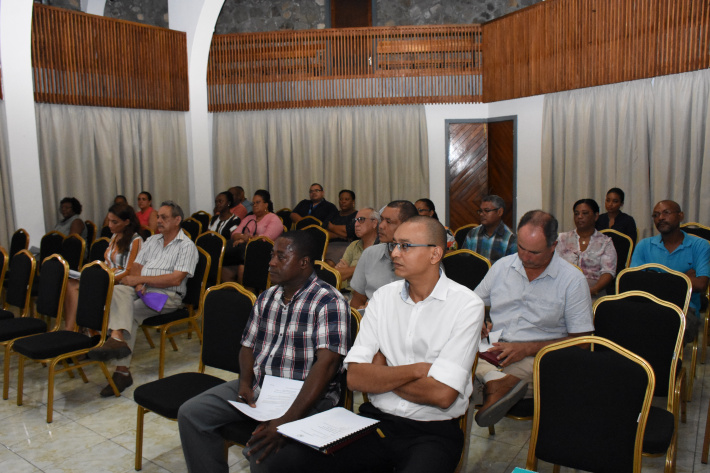 The meeting between the electoral commission and stakeholders yesterday

More youth engagement in electoral process, work towards getting an accurate and reliable voters’ registry and provisional election dates were some of the issues addressed during a meeting yesterday when the electoral commission met its stakeholders.

The stakeholders meeting comprised representatives and officials from different political parties and civil society whereby they addressed voter education and information, the restructuring of the commission and election preparedness ahead of the 2020 presidential elections.

The meet, presided over by the chairman of the electoral commission, Danny Lucas, commenced with the announcement of the secretariat and new appointments to the commission including that of Manuella Amesbury as the chief electoral officer (CEO). Mrs Amesbury was appointed to office and started discharging her functions as of September 16, 2019.

Lynn Gillian Bilal was announced as the chief registration officer, Rose-Mary Richard as the new finance manager who is to deal with budgeting, Christopher Anthony as the IT manager and Salina Sinon as the senior legal officer whose duties involve liaising with the Attorney General’s office primarily in terms of electoral reforms.

As per the agenda, the minutes from the last meeting held three months ago were reviewed before further discussions about electoral preparedness and the commission’s restructuring.

“However, the commission is not here to carry out administrative duties. Administrative duties and operational duties in terms of elections, how it is planned, how it is implemented on election day, ensuring everything is in place, for instance ballot papers, polling stations and functions of the polling stations fall under the responsibility of the chief electoral officer,” Mr Lucas explained.

He went on to state that the law imparts the powers to the chief registration officer for compiling the certified voters’ registry.

There was general consensus that it is imperative to get young people who are eligible to vote engaged and informed about the process and their duties and rights as citizens in a democracy.

Simon Gill from the United Seychelles party, leader of Linyon Demokratik Seselwa (LDS) Roger Mancienne and leader of the opposition in the National Assembly Wavel Ramkalawan all highlighted the lack of interest among youths to register for the voters’ registration proposing that names should be added to the list on their 18th birthday and for arrangements to be made for those who turn 18 on the day of the election.

The commission noted that they will consider the proposal and keep stakeholders informed on the process and eventual decision.

Mr Mancienne expressed concerns over the involvement of youth voter registration and education to government agencies pointing out the possibility of political interference, although representatives of both SNYA and CDWS assured that the process is objective and has the potential to reach a large proportion of the youth population.

Mr Ramkalawan also proposed that the commission provides a provisional date for the election to allow for other concerned parties to make the necessary arrangements. He referred to the elections in Mauritius, for which the set date clashes with school examinations noting that schools are used as polling stations among other stakeholders who need to make necessary arrangements.

Lawyer Anthony Derjacques made reference to Schedule 3 of the Constitution which stipulates that elections shall be held 57 to 59 months after the last presidential election noting that there is no legal prohibition against setting a provisional date.

Once again, there was consensus on the matter and the point raised that the Seychellois diaspora can also plan ahead if they wish to fulfil their civic duties, and the chairman noted that it was a point that the commission would decide upon.

The meet was also an opportunity to address voters’ registry and education. Chairman Lucas emphasised that the commission is striving towards an accurate certified voters’ register highlighting numerous errors in previous lists including the inclusion of dead persons on the certified list though he noted it was probably an error. He also pointed out that for persons with the same surname, their first names were not categorised alphabetically. He urged for each citizen to fulfil their duty and take a few minutes of their time to verify their details on the voters’ list in their respective districts and for others who may have moved districts or changed their personal details to have them changed accordingly.

Chief registration officer Bilal noted that the commission is planning a special exercise in Persévérance, the new electoral district.

Mrs Bilal also noted that the commission intends on rolling out more aggressive voters’ education campaigns and more frequently in due time.

In terms of election preparedness, chairman Lucas noted that many of the necessary and discussed reforms have already been implemented and facilitated by close collaboration with the Attorney General’s Office.

With regards to ballot papers and equipment required for elections, the commission noted that it will be procuring ballot papers from overseas on account that it costs roughly the same as it would to print locally and that the special paper and security standards required are not available on the local market.

Mr Lucas also noted that all election equipment is to be procured to minimise the risk of tampering and keep the election process as transparent as possible.

Political campaigns and broadcasting of PPBs

A further point of discussion was the role of the media in the electoral and election process. The Seychelles Broadcasting Corporation was in the limelight after the chairman of its board, Gerard Lafortune, stated that the SBC Act stipulates that SBC shall broadcast political party broadcasts (PPB) if the electoral commission finances the slots. He also noted that SBC will not be involved in the production of PPB as it needs to be fair and objective. There was some disagreement on the matter on account that smaller, newly established political parties lack the funds and technical know-how to produce and pay to broadcast PPBs and is thus not equitable.

The commission agreed to schedule a meeting with all media houses for further discussions, acknowledging that the commission will need to budget for the broadcasting of PPBs. 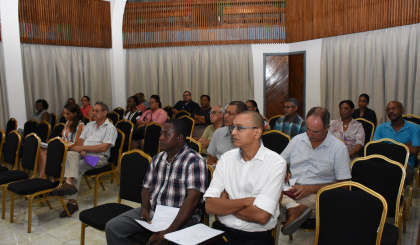