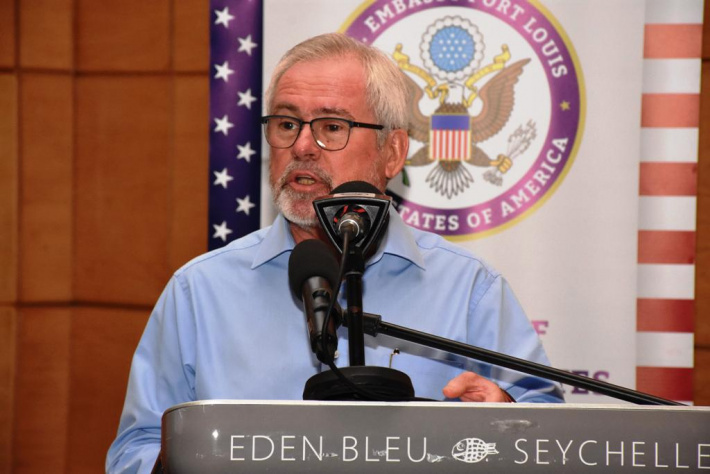 Minister Loustau-Lalanne addressing the gathering at the launch ceremony

A new manual which will allow auditors and other public sector officials with an oversight role to better detect and report on fraud and corruption cases in a more systematic and effective way, has been officially launched.

This was during a short ceremony at the Eden Bleu hotel yesterday morning.

Forensic auditing refers to the examination and evaluation of financial records to determine if they are accurate and lawful.

The new manual, considered an effective auditing tool, will be used not only by officials from the Office of the Auditor General (OAG) but also by any government agencies and other entities when examining financial records.

The launch and hand-over of the manual to Finance, Trade, Investment and Economic Planning Minister, Ambassador Maurice Loustau-Lalanne, Auditor General Gamini Herath and other key stakeholders by Everhard Carstens, an international auditing expert, comes after a seven-week project which included forensic auditing training for officers of the OAG and other government and non-government entities on the manual.

Mr Carstens, who has over 23 years of experience in auditing, led the training.

The project is being supported by the United States of America Embassy in Mauritius and Seychelles which has partnered with the OAG to boost good governance and fiscal transparency.

The programme has been made possible by a US State Department Fiscal Transparency Innovation Fund (FTIF) grant. These grants are part of the US government’s longstanding efforts across Africa and globally to promote good governance, democracy, and transparency. Since its establishment in 2012, FTIF has provided funding to 47 projects in 35 countries. This is the first FTIF grant awarded to Seychelles.

Addressing everyone present at the launch, Minister Loustau-Lalanne remarked that despite recent improvements in fraud prevention, detection and investigation through structures such as the Anti-Corruption Commission, the threat from fraud continues to have a damaging effect on our country and its citizens.

“Individuals, charities, public services and the private sector continue to pay a high financial price as a result of fraud and corruption. As staggering as they are, the costs of fraud cannot be measured solely in terms of monetary loss,” Minister Loustau-Lalanne pointed out.

“The effects permeate throughout society. Large businesses suffer reputational damage. Small and medium-sized businesses can go out of business, affecting their owners, employees and their families and damaging the country’s economic prospects. Some individual victims, often among the most vulnerable people in our society, suffer serious emotional trauma; some have even taken their own lives,” he added.

Minister Loustau-Lalanne stressed that this programme on fraud awareness and forensic auditing is very relevant and comes at a very important time.

“According to recent global statistics published by the Association of Certified Fraud Examiners, government organisations lose a median US $109,000 (roughly R1,492,000) every time an organisation falls victim to fraud. Seychelles is not exempted from this and we experience fraud and corruption on a daily basis,” he stated.

The minister went on to add that Seychelles can already see the benefit of establishing the Anti-Corruption Commission for example, as it has been inundated with potential fraud cases of which 172 complaints received and 151 cases registered since its inception in 2016. The commission has 70 cases under active investigation from which it is expecting a few prosecution before the end of the year 2019.

“We are looking at building its capacity to empower it to effectively conduct investigations of offenses,” the minister said.

The US embassy’s deputy chief of mission Judes E. DeBaere who also addressed the audience, stated that preventive and investigative forensic auditing are important building blocks in the fight against fraud and corruption.

Auditor General Gamini Herath noted that forensic auditing is quite new in Seychelles and this is why it has been important to create broad awareness across the public sector around the subject and in doing so bring in a number of entities tasked with certain oversight roles.

The manual is expected to come in use mid next month.

Mr Herath said it will help in a big way as previously there was no methodology to detect and report on fraud and corruption cases.

“This is a methodology that has been developed and tested elsewhere in the world and now that it has been brought here we are better equipped to deal with corruption and fraud cases in a more systematic and effective way,” said Mr Herath. 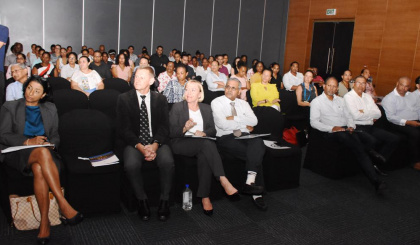