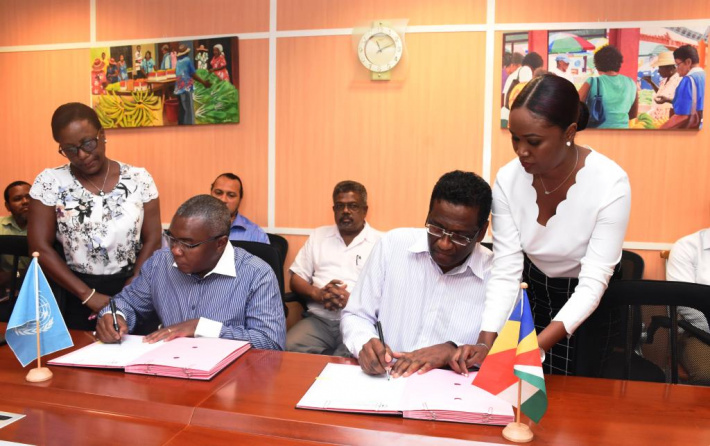 The National Biosecurity Agency (NBA) is working towards an Integrated Pest Management (IPM) system for the effective control of the invasive Euproctis caterpillar (hairy caterpillar), through a technical cooperation programme project between the government of Seychelles and the Food and Agriculture Organisation (FAO) of the United Nations.

The project agreement was officially signed yesterday morning by the Minister for Fisheries and Agriculture Charles Bastienne and FAO representative for Madagascar, Comoros, Mauritius and Seychelles Patrice Talla Takoukam, in a brief ceremony at the ministry’s offices at Maison Collet, Victoria.

As per the project agreement, FAO is to provide a sum of $148,000, laboratory equipment and technical assistance from experts to build capacity of local staff to handle the scientific work associated with IPM, developing a database for insects, pests and others related to the hairy caterpillar and designing stronger and more effective methods to control populations of the species which started to wreak havoc in Seychelles in February 2015.

The 24-month project is a continuation of projects implemented over recent years, the first of which was to help identify the species and its origin.

“FAO is providing finance and technical capacity in an area where we have already implemented projects in previous years. In fact, this one is a continuation of programme that we implemented during the last few years to address the issue of hairy caterpillar. In the framework of that programme, we had provided technical capacity, but also, there were a number of international consultants who came into the country to help the national counterparts to identify the nature of the pest that were really threatening the crops and trees in the Seychelles. So following that programme, which was a small programme, we then received a new request for a new programme that will really help to strengthen the capacity of the local National Biosecurity Agency but also to provide some specific measures to strengthen their capacity. We are hoping that this will really help the country to strengthen its capacity in handling any pests,” Mr Takoukam said.

Minister Bastienne also seized the opportunity to express his gratitude to FAO for always responding to calls for assistance and noted that during previous phases of the project, the species was linked to Burundi, where the species was identified by a consultant provided by FAO. The consultant also made available 50 samples of the species of the samples, 98 percent indicated that there was some sort of natural control in Burundi, which is helping to control the population of hairy caterpillars there.

Minister Bastienne further noted the efforts to manage hairy caterpillar populations since 2015 including widespread spraying and fogging, but such resulted in detrimental effects on other species such as the red-legged golden orb-weaver spider, leading the ministry to stop fogging.

Through the agreement, the NBA will conduct scientific research on the species whose life span is 1-25 days and which reproduces exceptionally fast, laying 200 eggs at a time, especially during dry, hot seasons. It will seek to uncover other natural species which may interfere with the reproduction and population of the hairy caterpillars as was the case in Burundi.

Mr Naiken noted that the populations have decreased significantly over the past year with fewer incidences recently. He noted that a further component of the project is to get all stakeholders involved in their efforts and to develop their capacities in scientific research and IPM.

Research will also involve identifying where the population is at its highest and the plants on which the species thrives and the findings used to inform decisions as to how to manage and control the species.

In the meantime, organic biological agents will be used to control the pests to avoid possibilities of interfering with other species as was the case with pesticides.