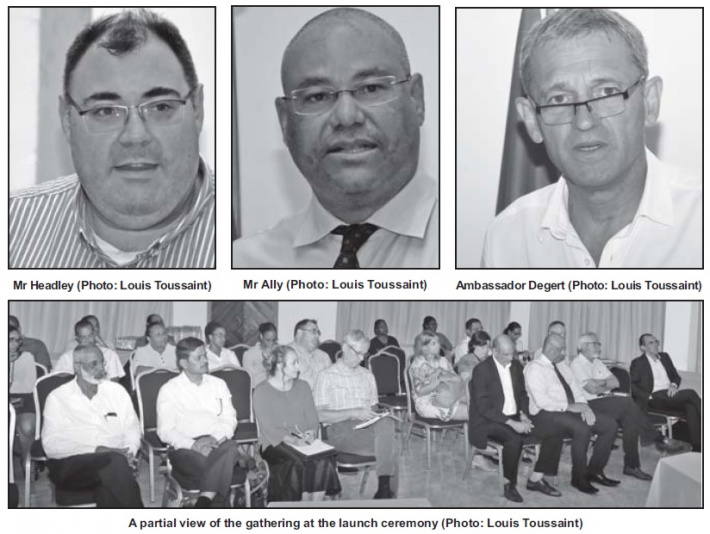 The European Union (EU) is funding the mobilisation of a legal drafter and an attorney-at-law, both experts in the field of financial crimes, who have joined the Attorney General’s office for a period of 13 months.

This has been facilitated through an EU contract service for technical assistance for the department of legal affairs which was officially launched yesterday at the National House, where the AG’s office is located.

Present at the ceremony was the EU ambassador to the Seychelles and Mauritius Vincent Degert; Minister for Finance, Trade, Investment and Economic Planning Maurice Loustau-Lalanne; the Attorney General Frank Ally; members of the diplomatic corps and staff of the legal affairs department.

The first expert, Chris Headley, is a legislative drafting expert and barrister with over 20 years of experience in over 70 countries, most especially in small island developing states (Sids).

Mr Headley, who is already in the country, is well-versed in matters relating to law reforms and legislations.

His task for the next year or so will be to improve the AG’s office efficiency in drafting key bills and regulations relating to anti-money laundering, confiscation of proceeds of crime and anti-corruption.

The second professional brought in by the EU is advocacy expert Steven Powles, who is yet to arrive in the country.

The criminal defence barrister has undertaken a number of legal cases that have helped develop laws in relation to anti-money laundering, proceeds of crime and anti-corruption.

In Seychelles, his objective will be to help the AG’s office in pursuing cases linked to financial crimes, ensure that financial crime laws are enforced and, like his colleague, assist in the capacity building of the legal affairs department.

Upon the conclusion of the EU technical assistance in December 2020, the experts would have hopefully helped in establishing a fully trained and motivated team of law officers.

During his remarks yesterday, Mr Ally explained that he had submitted the request for technical assistance earlier this year and expressed his gratitude for its approval by the European Commission International Cooperation and Development Programme.

He noted that his office has been making great strides towards establishing legislations aimed at tackling financial crimes.

In August 2019, a delegation from the legal affairs department visited the Cayman Islands to explore the best practices used in the Caymans to combat financial crimes and Mr Ally revealed that Seychelles will be adopting some of these best practices in 2020.

The office has also completed the drafting of an anti-money laundering bill and a beneficial ownership bill.

“During 2020, we will establish an anti-money laundering section in our department to support all stakeholders in financial crimes, namely the Financial Intelligence Unit, Central Bank, Financial Crime Investigation unit of the police and the Anti Corruption Commission,” Mr Ally further revealed.

These endeavours to ensure that local legislations conform to international standards and international conventions ratified by the Seychelles, will help the country in its request for a re-rating by the Eastern and Southern Africa Anti-Money Laundering Group (ESAAMLG) in mid-2020.

Meanwhile Ambassador Degert highlighted that Seychelles’ commitment to tackle and meet its obligations is remarkable.

“Although Seychelles is a relatively young free nation, it has made great progress in consolidating its democratic bases and in ensuring respect of the rule of law,” Mr Degert praised.

Aside from the technical assistance in the form of the two legal experts, the EU has allocated the government with an envelope of R4.5 million to help the AG’s office in drafting urgent bills.

Also in its support to encourage efforts to tackle financial and related crimes, the EU will also provide technical assistance to the Anti Corruption Commission which will be supplied with three European senior investigators for over a year.