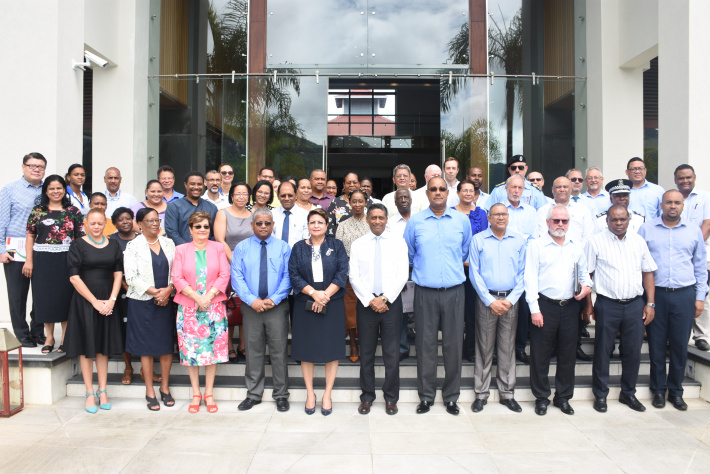 Guests in a souvenir photograph after the launch ceremony (Photo: Thomas Meriton)

The Seychelles government with the support of the United Arab Emirates will next year start the construction of a state-of-the-art rehabilitation village for persons affected by drugs.

The residential village will be built at Bon Espoir.

The announcement was made by President Danny Faure during the official launch of the National Drug Control Master Plan 2019-2023 held yesterday at the Eden Bleu conference room, Eden Island.

The village, which will be manned by the Agency for the Prevention of Drug Abuse and Rehabilitation (Apdar), will cater for some fifty male and female adults as well as children under the age of eighteen years old. It will offer its residents who are abusing drugs, a detox and drug-free rehabilitation programmes while also offering skills-building in fields such as masonry, agriculture, carpentry and information technology among others, so as to get them to integrate and contribute to the society upon completion of their treatment.

The construction of the village which have been downsized from its original plan, will amount to R50 million and R25 million have already been allocated and approved by the National Assembly as a grant into the 2020 national budget.

President Faure launched the master plan in the presence of the Designated Minister Macsuzy Mondon, the leader of the opposition in the National Assembly Wavel Ramkalawan, the leader of government business in the National Assembly Charles Decommarmond, ministers, secretary of state for the Prevention of Drug Abuse and Rehabilitation Patrick Herminie, the Commissioner of Police Kishnan Labonte, Attorney General Frank Ally, principal secretaries, members of the National Assembly, and representatives from ministries, agencies, the diplomatic corps, faith-based organisations, the civil society and board members and staff of Apdar among other invitees.

Started off in June 2019, the five-year master plan developed under the international convention for drug control and which is also in line with our constitution along with other policies and strategies is aimed at improving the wellbeing, safety and security of the individuals and the population at large and with a goal to ensure a coordinated and comprehensive approach to national drug control in Seychelles.

It has been developed with the technical expertise of Apdar and the United Nations Office for Drugs and Crimes (UNODC), together with national partners and stakeholders.

The objective of the plan is to provide national coordination in identifying and addressing drug related issues, to promote participatory processes facilitating engagement and involvement, to foster better understanding between key national partners, to develop programmes supporting evidence-based intervention and to support nationally consistent drug related legislative and regulatory responses.

Addressing the gathering, President Faure said that tackling the drug issue is the government’s top priority. He noted that government is determined to provide a robust response to the issue of drugs using evidence-based strategies and best practices, as outlined in this plan.

“For too long we have seen the problem of drug abuse in our society through the lens of criminal justice. We are putting a lot of resources into combatting the drug trade in Seychelles. We are working very aggressively with regional partners to prevent an influx of heroin in particular, and cut the pathways for these drugs coming in,” President Faure said.

“And the only way we can reduce demand is if we are providing treatment and thinking about this as a public health problem and not just a criminal problem,” President Faure further said.

President Faure pointed out that without the help of the civil society, NGOs, faith-based organisations, schools, communities and citizens working together to fight this plague, it is impossible for government alone to solve the drug epidemic.

President Faure noted that with the recent approval by Cabinet of a detailed school-based prevention programme for all our school children, strengthening their emotional intelligence and resilience is testimony of working towards prevention early rather than cure later.

He also said that the government’s approach to the drugs problem is focused on people and their human rights and fundamental freedoms, hence the recent set-up of the medically assisted treatment clinic at the ex-youth centre for persons abusing drugs a first step in the strategy to provide dignified treatment to the victims of drug abuse, away from stigma and discrimination.

President Faure said that with increased pressure by government on the drug trade, in particular the heroin one, traffickers are starting to introduce other drugs like cocaine, crystal meth, and synthetic cannabinoid which do not have a substitution treatment like heroin.

“A drug-free treatment residential programme is an absolute necessity,” President Faure said, thanking every person involved in the fight against drugs, especially the dedicated and hard-working staff of Apdar who are committed to supporting those affected.

In his opening remark, SS Herminie highlighted the importance of the mainstream political parties at the launch which indicates a sign of understanding of the drug situation and should drive home the message that there is absolutely no place for political polarisation in the fight against drugs.

He said that the methadone programme is saving government around R55 million per year as a result of crimes not committed by the persons affected with drugs while some also enter the world of work.

Speaking to the press later, SS Herminie said that the residential village which was initially going to be built at Cap Ternay had to be scrapped due to resistance from the local community and other interest groups.

Eventually Bon Espoir was considered as the ideal place for the village on account of its isolation.

SS Herminie said that the scaling down of the original plan of the village is due to the effectiveness of the methadone programme where now there are fewer people than before to go on residential rehabilitation treatment.

He noted though that given the new landscape of drugs in the country in terms of crack cocaine, crystal meth and synthetic cannabinoid among other dangerous drugs with no substitution therapy treatment, there will be a need for such drug-free rehabilitation centre, supported by psychological support.

SS Herminie noted that among the long-term plan for prevention, treatment, rehabilitation and harm reduction, is the recognition through the master plan of the human rights of the persons affected by drug and alcohol abuse.

Mr Ramkalawan, who welcomed the National Drug Control Master Plan, said that we have to stay committed to fighting drugs and that the police should be given the necessary resources to control and intercept drugs coming into the country while also reinforcing strategies to prevent people, especially the young, from using drugs and those on drugs to stop using them.

He also welcomed the construction of the rehabilitation village to treat persons affected by drugs.

While also supporting the master plan with the inclusion of the rehabilitation village, Mr Decommarmond took the opportunity to implore drug traffickers to please stop with their devious acts as they should realise by now that they are destroying the core fabric of our society and eventually the future of our country.

He further said that government should show no mercy in the fight against drugs and expects the judiciary to take its responsibility more seriously and to give meaningful deterrent and exemplary sentences as punishment to drug traffickers.

During the ceremony, SS Herminie presented copies of the National Drug Control master plan to President Faure, Mr Ramkalawan and Mr Decommarmond. Other guests were after presented with their copies.

After the launch, the stakeholders involved with the formulation of the master plan had a working session on the way forward with regard to the implementation of the plan.

A contributor to the master plan, Faddy Banane, who is the chairperson of the Drug Utilisation Regional Network Seychelles (DURNS), said that his organisation is looking forward for the implementation and outcome of the plan, especially in relation to the human rights of the persons affected by the drug issue. 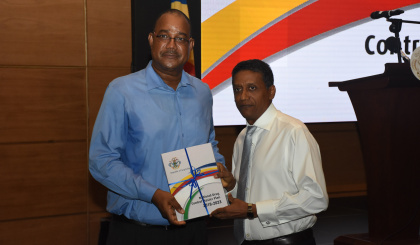