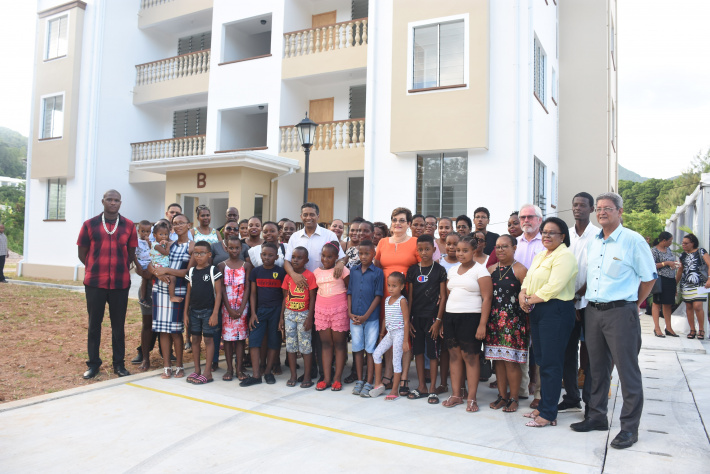 The families in a souvenir photograph with President Faure and other guests on the compound of the new estate (Photo : Jude Morel)

Three blocks of flats, comprising 24 units of the Le Domaine Housing Estate, located at Au Cap, were yesterday presented to 24 priority applicants of the Housing Point System during a brief ceremony attended by President Danny Faure.

The keys to the units, comprising eight two-bedroom units and sixteen three-bedroom units, at a cost of R19.2 million, were yesterday presented to applicants, during the last housing estate opening ceremony for the year 2019.

To commence the ceremony, Minister for Family Affairs Mitcy Larue pronounced a speech on behalf of Minister for Lands, Habitat, Infrastructure and Land Transport (MHILT) Pamela Charlette, in which she commended President Faure on the initiative to construct 24 housing projects in 24 districts and reaffirmed the government’s commitment towards providing Seychellois families in need with social housing.

“The government, under the direction of President Faure, is working hard to ensure that the dream of each family to own their own house is realised, just as it is for 24 families today. Resources don’t permit us to assist all families at once but the government remains committed to continuously construct more houses for our citizens. It must be noted that not many countries have such housing programmes for their citizens,” Minister Larue stated.

Minister Larue continued on to urge all families to be responsible, respectful and courteous to their neighbours to ensure that the housing estate is one which is exemplary.

Following Minister Larue’s address, the families were presented with the keys to their respective dwellings before the plaque for the estate was officially unveiled by President Danny Faure.

President Faure also interacted with numerous of the new home owners accompanying them on a tour of the houses, all of which are furnished with features such as kitchen cabinets and built-in wardrobes, as well as outside sink units to facilitate the de-scaling of fish among other uses.

Au Cap’s District Administrator Fatimah Marie also pronounced a vote of thanks on behalf of all the residents of the new housing estate, expressing gratitude to the government for prioritising the needs of Seychellois families.

As the overjoyed families explored their new homes, a choir from MHILT animated the special moment with Christmas Carols.

Over the course of 2019, MHILT has assisted 302 families with houses through social housing. A further 100 homes are expected to be presented to applicants early 2020 as housing projects in Anse Boileau, Grand Anse Praslin, Bel Air and Pointe Larue near completion. 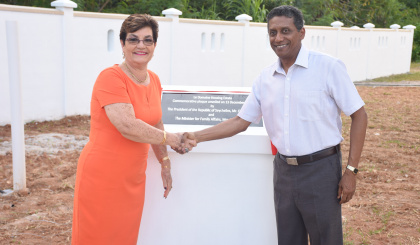 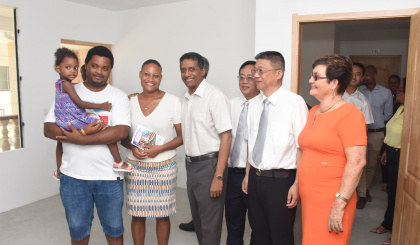 A proud family pose with President Faure and other guests in their new home (Phot : Jude Morel) 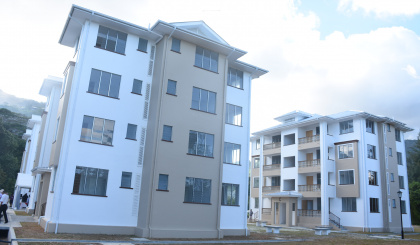