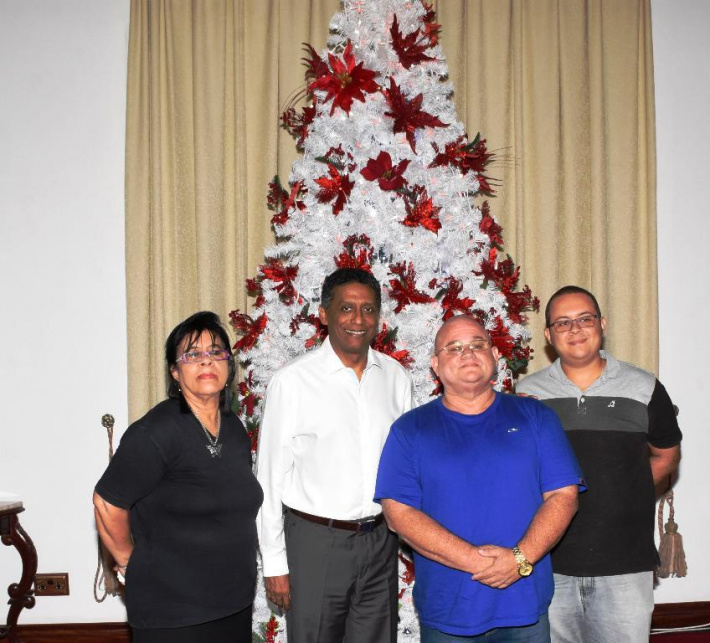 Mr Camille (second from right), his wife and son in a souvenir photograph with President Faure (Photo: Joena Meme)

President Danny Faure yesterday met composer, musician and singer and Serge Camille at State House during a courtesy call in relation to his contribution towards entertaining the people over the years during the festive season.

President Faure thanked and congratulated him for bringing joy to the people of Seychelles during his musical career especially through his song ‘Sa Kart Nwel’, which is much appreciated during the festive season.

Mr Camille said it was a surprise visit and that President Faure had told him that it had come through a written request by a senior citizen through him (President Faure) who had asked him on the whereabouts of Mr Camille and asked what was he doing at the moment.

The 59-year-old singer who now depends a little bit on the support of his walking stick, said that he had call it quit in the music industry, “just like that”, since ten years ago, after being in it for 25 years. He has since been running his family’s gift and souvenir shop at Beau Vallon.

“I used to earn my living only from my music but I quit ten years ago. I do not have any musical instruments or anything with me at the moment. I do not have any regret for dropping my music career as for me it was not my initial career I had wanted to do but as a hobby it had overcome my teaching career path,” Mr Camille said.

Mr Camille said he was very happy to have met President Faure to discuss about his career path as a musician which he did for a living, day and night.

He also took the opportunity to thank all his music fans who had supported him and wished all Seychellois the very best for the festive season.

He was accompanied to State House by his wife Christelle Camille and the second of his three sons, Ryan Camille.

Mr Camille is also the father of Clive Camille, the director of Radius Studios that manages Tele Sesel.