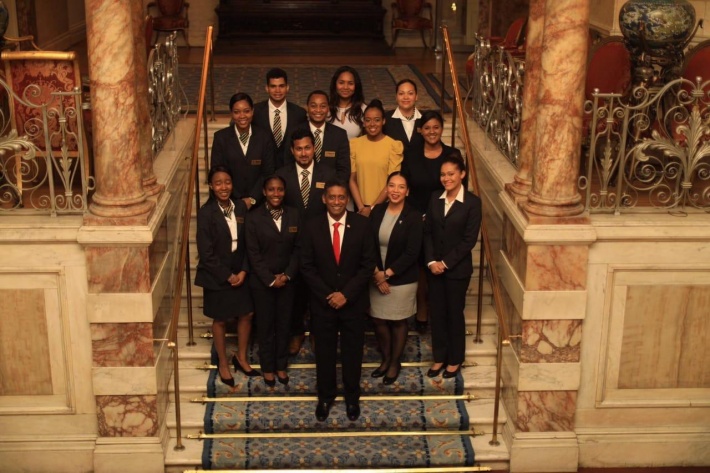 President Faure in a souvenir photograph with the Seychellois students

On the first day of his visit to Ireland, President Danny Faure paid a courtesy call on Irish President Michael D. Higgins, at the Presidential Palace in Dublin on Saturday.

President Higgins warmly welcomed President Faure and spoke of the deep connection that exists between Ireland and Seychelles.

He expressed interest in the plight of small island states and highlighted the need for a common position on climate change.

He said that marine pollution is of great concern for the world and stressed on the need to shape a new approach in addressing ecology, economy, culture and gender by changing old thinking and making way for the new.

President Higgins congratulated President Faure for his recent deep dive address on ocean protection and for being nominated, along with former President James Michel, for the National Geographic Planetary Leadership award.

President Faure thanked his counterpart for the warm welcome extended to him and his delegation and reiterated his invitation to President Higgins to visit the Seychelles.

He briefed him on the work the Seychelles is doing in environment protection and sustainability.

A key highlight for President Faure was to meet Seychellois students who are studying at the Shannon College of Hotel Management in Ireland. This was during a reception hosted by the Deputy Secretary General of the Department of Foreign Affairs and Trade, Brendan Rogers.

President Faure thanked the students for their presence and took the opportunity to highlight the strong ties that exist between Seychelles and Ireland which can be further cemented, for example in the field of education.

In a short interview, one of the students at the event, Roberto Boniface, expressed great satisfaction with his placement at the school and spoke of the ease of integration for all the students into the college.

“At the college they embrace everyone. The course provides lots of networking and travel opportunities. I look forward to bringing my expertise back to the Seychelles,” said Boniface.

His comment was echoed by the head of school at the college, Dr Phillip Smyth, who stated that Seychellois students are academically strong and very motivated and coupled with the college staff's commitment, a good learning environment is harnessed.

Discussions on potential areas for further bilateral cooperation between Seychelles and Ireland continued over a dinner hosted by the Minister for Culture, Heritage and the Gaeltacht, Josepha Madigan. 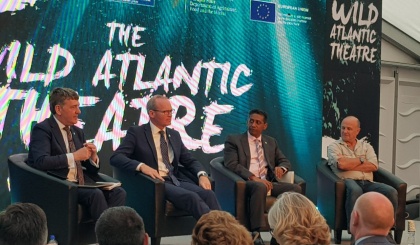 President happy with interest and enthusiasm shown by STA staff and students towards tourism industry |13.05.2022